Hamburg Steak, also known as Hambāgu, is the Japanese version of Hamburger Steak. Although it’s named after the German port city of Hamburg, the dish originated in New York as a Hamburg-style steak. It’s based on German Frikadelle, and although it’s unclear how it ended in Japan, the first written references of a similar dish appeared in the 1870s.

Hamburg Steak is considered yōshoku, or Western food in Japan, but it’s become one of the most popular home-cooked meals over the past 70 years. It’s typically served with a sweet and sour sauce made from ketchup, wine, and chunou sauce, but Teriyaki Sauce is another popular condiment.

Ingredients for Hamburger Steak with Teriyaki

How to Make Hamburger Steak with Teriyaki

The first thing you want to do is cook the minced onions. You can saute them in a pan, but to save time, I like to add them to a microwave-safe bowl, cover them with a lid, and microwave them for four minutes twenty seconds at 600 watts. This should get them translucent and tender, and some of them will just be starting to brown. Let these cool off enough so you can handle them without burning yourself.

In a separate bowl, add the ground beef, cream cheese, panko, egg, Worcestershire sauce, soy sauce, and then add in the cooled onions. Put some gloves on and use your hand to knead the mixture until the ingredients are evenly distributed, and the mixture is uniform in color.

Prepare a parchment paper-lined tray, and shape the hamburger mixture into patties. If you plan to pack these into a bento box, you might want to make 8-10 smaller patties, or you can go with 4-6 larger patties if you plan to serve these on a plate. The key here is to make them all roughly the same size and thickness to cook through in a similar amount of time.

You also want to force out any air and seal up any cracks, or your patties will split open when you cook them. You can do this by throwing the patty from one hand and smacking it against the other.

Next, you want to dust the patties with a thin, even coating of potato starch. Put some starch into a tea strainer and tap the side of it to give each patty a light dusting. You can toss the patties between your hands again to remove any excess starch and fix any indentations.

To fry up the Hamburg Steak, heat a frying pan over medium heat and add two teaspoons of oil. Unless you have a large pan, you will probably need to fry the patties in two batches, so make the first batch without overcrowding the pan.

When the patties are cooked about a quarter of the way through, flip them over. You should only have a little browning at this point, but if they’re already looking golden brown, turn down the heat a bit.

Fry the second side until it’s golden brown, and flip them back over to continue browning the first side. Since they will cook some more in the teriyaki sauce, transfer the patties to a plate when they reach an internal temperature of 140F (60C). Repeat with any remaining patties.

Once all of the hamburger steaks are cooked, turn off the heat and wipe out all of the oil and particulate matter from the pan. I know some of you are wondering why we’d want to get rid of the fond on the pan, but teriyaki sauce needs to be clear and glossy as “teri” literally means shiny.

When the pan is clean, add the soy sauce, sugar, and sake and bring the mixture to a boil over high heat. Once the teriyaki sauce starts to thicken, return the patties back into the pan.

Roll the Hamburg Steaks around the pan until the teriyaki sauce has started to caramelize, and the patties are coated with a thick, shiny glaze.

Hambāgu (ハンバーグ) is the Japanese version of Hamburger Steak. It’s a meat patty generally made of beef, onions, breadcrumbs, and seasonings that’s pan-fried and served with a sweet and savory sauce.

What’s the difference between a Hamburger and Hamburg Steak?

Hamburger without “steak” at the end of the name refers to both ground beef and a meat patty made with it. It’s most commonly associated with American-style hamburgers, which are a sandwich with a pure beef patty. Hambāgu, Hamburg Steak, and Hamburger Steak can be used interchangeably and refers to a category of dishes made by mixing ground beef with other ingredients and serving it with a sauce, instead of a bun.

How do you say Hamburger Steak in Japanese?

In Japan, Hamburger Steak is typically called Hamburg Steak, which transliterates to Hambāgu Sutéki (ハンバーグステーキ). It is pronounced as follows:

What can I serve Hamburg Steak with?

Japanese Hamburger Steak is considered a Western-style dish in Japan, so it’s most commonly served with potatoes or pasta. This holds true when paired with a tomato or demi-glace sauce, but I tend to prefer it with rice when it’s glazed with teriyaki sauce. As for vegetables, I recommend something simple and colorful, like broccoli and carrots that have been boiled in well-salted water. 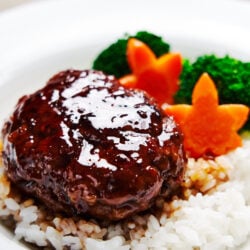 What do you think?19 Cancel reply