Teriyaki (照り焼き) is a Japanese culinary technique that involves cooking a protein and then glazing it in a sweet and savory sauce. Teri (照り) means shiny or glossy in Japanese, and yaki (焼き) refers to any high-temperature cooking method such as grilling, roasting, or pan-frying. The key to making an authentic Teriyaki Sauce is to balance sweet, savory, and umami tastes while ensuring the sauce stays clear and glossy.

Why This Teriyaki Sauce Recipe Works?

Adding any ingredients that dull the luster of Teriyaki Sauce is a no-no. You can either use these ingredients to marinate your food, or use them as a garnish.

How to Make Teriyaki Sauce

Add equal parts soy sauce, sake, and sugar to a jar or bottle. Seal the lid and shake the mixture until the sugar has fully dissolved. This can also be done in a bowl with a whisk. Refrigerate the Teriyaki Sauce until you are ready to use it. It can be stored in the refrigerator for a few months.

How to Use Teriyaki Sauce

What is Teriyaki Sauce?

Teriyaki is a Japanese cooking technique used to cook and glaze proteins with a savory-sweet sauce. The sauce (taré in Japanese) is generally made from soy sauce, sake (or mirin), and sugar, and it’s thickened by boiling the ingredients until it becomes thick and syrupy.

How do you pronounce Teriyaki?

Teriyaki is a 4-syllable name pronounced as follows (read the italicized parts).

te like ten
ri the “ri” sound does not exist in the English language, but the best way to make it is to say the word “ream” with the tip of your tongue at the front of your mouth.
ya like yacht
ki like key

Yes, this teriyaki sauce is vegan and vegetarian friendly, and it can be used to season vegetables, mushrooms, or your favorite plant-based protein.

Teriyaki sauce made with regular soy sauce is not gluten-free. However, you can easily make it gluten-free by substituting tamari for soy sauce.

How to thicken teriyaki sauce?

Teriyaki sauce does not need cornstarch to thicken it. Instead, the thickness comes from reducing the sauce until the sugar starts to caramelize. This thickens it into a glossy glaze and adds a nutty complexity to the sauce.

Can I skip the sake? 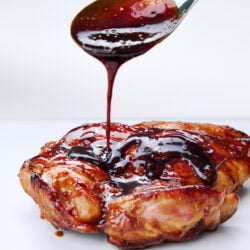