As someone who grew up in the US eating American spring rolls, I was surprised when I bit into the Japanese version for the first time, and my mouth was greeted with a gush of flavorful juices. Harumaki, or Japanese spring rolls, are a variation of Chinese Chūn Juǎn (春卷), which have been adapted for the Japanese palate. Although anything wrapped in a spring roll wrapper is considered Harumaki here, the most common version is made by filling the wrapper with a stir-fry of vegetables and meat that’s been bound together with a thick savory sauce.

Introducing liquids into a fried dish can be a bit tricky, but I’ve outlined a few tricks to help make it simpler.

How to Make Harumaki Filling

Before you start cooking, make sure you have all the ingredients prepared and ready to use as parts of the process are time-sensitive. If you need more specific instructions on how to chop everything, check out the video below.

The first thing you want to do is marinate the ground pork with soy sauce, mirin, potato starch, and white pepper. Just add the ingredients to a bowl and mix everything until it’s evenly combined.

You’ll also want to combine the chicken stock, one tablespoon of potato starch, and sesame oil together.

Put a large frying pan over medium-high heat and then add the oil, ginger, and scallion stems. Stir-fry the mixture until it’s fragrant (about 2 minutes), but don’t let it brown at this point.

Add the carrots, bamboo, cabbage, and shiitake mushrooms and stir-fry the mixture until the vegetables are vibrant in color and start to become tender (about 3 minutes). Be sure to keep everything moving around the pan so that nothing burns.

Push the vegetables to the edge of the pan to make space in the center. Add the marinated pork into this spot and use a spatula to crumble it up. As the meat cooks, mix it in with the vegetables.

When the pork is mostly cooked through, give the chicken stock mixture a stir to reincorporate any settled starch and pour it into the pan. Let this cook until the sauce thickens and the pork is fully cooked.

Give the filling a taste and add salt as needed. My chicken stock was relatively low-sodium, so I added 1/4 teaspoon of salt, but it will depend on how salty your stock is.

Let the spring roll filling cool before making the Harumaki. You can speed this up by spreading the filling onto a metal tray and then putting the tray in a bigger tray that’s filled with cold water.

While you wait for the filling to cool, mix the flour and water to make a smooth paste. This will act as a glue to seal your Harumaki shut. You’ll also want to take the time to separate the wrappers. These dry out pretty fast, so work quickly and keep them covered with a damp dishtowel.

When the filling has cooled down, use a pastry scraper, a chopstick, or your finger to divide it into ten even segments; this makes it easier to make your rolls about the same size. Now is a good time to start preheating about 1.5-inches of oil in a heavy-bottomed pot to 360 degrees F (180 C)

To roll the Harumaki, put a wrapper on a clean work surface with a corner facing you. Add a segment of filling to the center of the lower half of the wrapper (the half closest to you).

Pick up the corner of the wrapper closest to you and roll it up and over the filling and roll it until you reach the halfway point. Fold the two flaps on the sides towards the center of the roll.

Apply some flour glue to the wrapper’s top edges like you would if you were sealing an envelope and then loosely roll up the remainder of the wrapper. I usually do this by rolling it with the tip of a finger lodged in each end of the roll. This will help prevent the roll from bursting as it fries. It also creates some separation between the wrapper’s inner layer and the outer layer, which helps keep the roll crispy until you eat it. Repeat with the rest of the wrappers and filling.

Before you start frying, prepare a deep bowl by lining it with three sheets of paper towels. The idea is to stand the spring rolls upright so the oil that has entered the roll can drain out of one end.

To fry the Harumaki, carefully add a few to the preheated oil. You don’t want to overcrowd the pan, or it won’t be easy to flip them over. Fry the Japanese spring rolls while rolling them around until the wrapper crisps; this will take about 3-4 minutes.

Drain the rolls standing up in the prepared bowl for about a minute before serving.

Harumaki (春巻き) literally means “spring roll” in Japanese and fits into the wafu-chuka(Japanese-Chinese) category of dishes, which includes gyoza, ramen, and karaage.

How is Harumaki different from American-Chinese spring rolls?

Both Harumaki and American-Chinese-style spring rolls are based on the Chinese dish Chūn Juǎn (春卷). In Japan, the definition of Harumaki is pretty broad, and anything that’s wrapped in a spring roll wrapper and fried is considered Harumaki. That being said, the most iconic filling for Japanese spring rolls involves an assortment of vegetables and protein that are sauteed and then cooked with a savory gravy. On the other hand, Chinese-American spring rolls generally do not include gravy inside the roll, and they are usually served with sweet and sour sauce on the side.

How do you pronounce Harumaki ?

Harumaki is a 4-syllable word and is pronounced as follows:
ha like honk
ru the “ru” sound does not exist in the English language and is like if you tried to pronounce “ruse” with the tip of your tongue at the front of your mouth.
ma like mall
ki like key

What temperature should I fry spring rolls at?

Because the ingredients on the inside are already cooked, you just need to crisp the wrapper. That’s why I recommend frying these at 360 F (180 C). 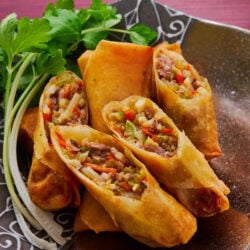