Shumai are a type of Chinese dumpling often associated with Cantonese cuisine. While many in the West have become familiar with it through dim sum (yum cha), it actually exists in many forms throughout China (and the rest of Asia). Steamed or pan fried, partially or fully enveloped in dough, filled with everything from pork to seafood to glutinous rice, it’s not clear what the original shumai was, but the most common forms involve a filling of pork partially wrapped in a thin round of dough before being steamed.

When made properly, the plump, juicy half-wrapped dumplings, burst into a savory pool of flavor in your mouth as you bite into them. Unfortunately, many places puree the filling, giving them a hot-dog like texture, even worse, some places leave the shumai in a steamer until some unsuspecting soul orders a plate of the dry lumps of mystery meat.

In my version, I’ve used a mixture of shrimp, squid and pork fat. The shrimp are added both minced and sliced to contribute two different textures. The minced squid lends a tender creamy mouthfeel to the filling, and because neither shrimp nor squid have much fat, the pork fat keeps the dumplings from drying out as they steam.

Ideally you should prepare the filling a day in advance, so the flavors have a chance to meld, and the texture of the shrimp has a chance to firm up, but if you’re in a rush, these can be made in one go. If you do make the filling in advance, make sure you wrap dumplings just before you steam them as the wrappers will absorb moisture from the filling and become mushy if you let them sit too long before.

Because two-thirds of the shrimp gets minced into the filling, the size of shrimp is not important, since smaller shrimp are less expensive and often come peeled, it’s a question of cost and convenience. The other third of the shrimp are used sliced in half, so it’s best if you can get large black tiger prawns. As for the squid, smaller squid tend to get tough when cooked, whereas giant squid (the type usually used for calamari steaks), stays tender, so it makes for a better choice when making shumai. 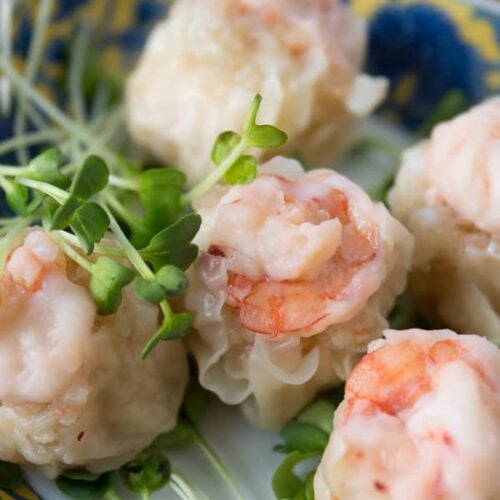