Of the standard soup offerings at Chinese-American restaurants, I’ve always been a fan of hot and sour soup. It’s not the prettiest soup, but what it lacks in aesthetics it more than compensates for with a cornucopia of textures, flavors and tastes. Because there are so many components, it may seem like a lot of work, but like most Chinese food, the bulk of the work is in the prep, so this soup actually takes very little time to cook.

The heat in hot and sour soup comes from the generous addition of white pepper, which lends a mellow body warming heat, unlike the intense mouth searing heat that comes from chili peppers. That said, if you really want your soup to be hot, you may want to add a few chili peppers. You can also finish this off with a little chili oil instead of toasted sesame oil.

The tartness in the soup is created by adding some vinegar at the very end. I like using black vinegar in my hot and sour soup because of its mellow acidity, earthy flavor and mild sweetness, that’s reminiscent of an aged balsamic, but depending on how sour you like you soup, you can use a blend of black vinegar and rice vinegar, or for a really sour soup, just rice vinegar.

I also prefer my hot and sour soup to be less viscous than the gravy-like concoctions served at most Chinese-American joints, which is why I use a relatively small amount of potato starch to thicken the soup. If you prefer your soup to be thicker, then by all means, increase the amount of starch. Also, I know someone is going to ask, so I’ll address this now: cornstarch will work, but I prefer using potato starch because it doesn’t get as gummy as cornstarch and tends to stay clearer.

As for the egg, there are a few tricks to get the egg to fan out into thin sheets rather than clump together into solid curds. The first is that the yolks and whites need to be completely homogenized so that it can poured in an even stream into the soup. The second is that the soup should be at a full boil. The turbulence from the boiling water as well as the impact of the egg hitting the soup from a distance creates feathery tendrils of egg that set almost instantly thanks to the high temperature of the liquid. Lastly, you want to keep your stream of egg moving around the pot as you pour so that the feathered egg has a chance to set before you pour more egg over the same area.

While hot and sour soup makes for a great first course to a Chinese dinner, it can be a delightfully filling meal on its own when paired with some ramen noodles. Just boil the noodles according to the package directions (I usually shave a minute off the package directions), and then pour the soup over the drained noodles. 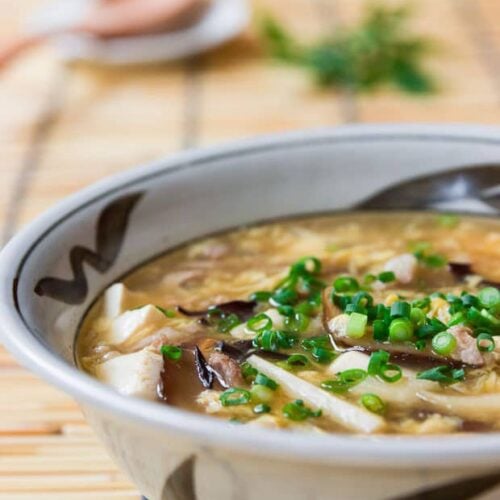