Kabocha Soup, which is also known as Kabocha Potage (かぼちゃポタージュ) in Japan, is a thick creamy soup that’s made from Kabocha squash (a.k.a. Japanese pumpkins), aromatics, and stock. It’s such a popular soup in Japan, instant varieties are available all year round, and in fall, there are pumpkin soup flavored snack foods like potato chips and instant noodles.

Although it’s pretty similar to a Western winter squash soup, the main difference is that Kabocha Squash Soup is often eaten for breakfast. Traditionally, Japanese breakfasts involved a bowl of rice, miso soup, and protein like grilled fish.

These days, many younger people prefer a more Western-style breakfast, including fried eggs, bacon, and toast. Old habits die hard, though, and the meal is often served with a bowl of vegetable soup like this.

How to Make Kabocha Squash Soup

The first thing you’re going to want to do is to saute the onions and carrots in the butter until they’re tender and fragrant. You want to take your time here, as the Maillard browning that occurs is going to give your soup a ton of umami.

After the aromatics start to brown, you want to add the kabocha in and continue to saute this for a bit. This is akin to roasting the pumpkin first and deepens its flavor.

Next, you’re going to add in the vegetable stock and cook the kabocha until it’s tender. Depending on how thickly you sliced your Japanese pumpkin, this should take anywhere from ten to fifteen minutes.

Now all you have to do is puree the soup in a blender. I recommend letting it cool down first as a sudden release of steam can cause the lid to blow off, painting your ceiling a vibrant shade of orange. The soup will have the best texture when blended in a high-speed blender, but a regular blender or hand-blender will work in a pinch.

Once the soup is nice and smooth, you just need to heat it up in a clean pot, season it with salt to taste and add the cream.

What is Kabocha Squash?

Kabocha (かぼちゃ or 南瓜) is a variety of winter squash that has dark green skin and vibrant orange flesh that’s sweet and starchy. The word kabocha literally means “pumpkin” in Japanese, so it’s often called Japanese Pumpkin or Kabocha Squash in other countries.

The texture and sweetness are almost like a sweet potato, making it a versatile vegetable that’s used in everything from soups to stews to stir-fries to desserts. As you may have guessed from the orange color, kabocha is loaded with beta-carotene, but it’s also a good source of fiber, potassium, and vitamin C.

How do you pronounce kabocha?

Ka-bo-cha has three syllables, and each one is pronounced as follows:

I’ve used dairy in this recipe, so it is vegetarian but not vegan. If you’d like to make this vegan, you can use olive oil to saute the vegetables and add a bit of nutritional yeast to give it some buttery umami. Then you can use coconut cream to finish the soup. It will make it taste like coconut, but it will give it a similar richness as the cream.

What’s a good substitute for kabocha?

If you can’t find Kabocha squash where you live, you can substitute any sweet, starchy squash like Butternut or Acorn.

Can I freeze Pumpkin Soup?

Yes, this soup freezes very well, so you can make a big batch and freeze portions. One trick I like to do is to freeze individual portions in small plastic containers. Once they’re frozen, you can unmold them and then store the soup blocks in a freezer bag to save space. Then all you have to do is defrost and reheat the soup in the microwave. 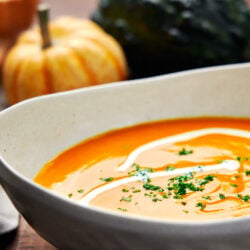