Kani Salad is a delicious Japanese seafood salad loaded with contrasting textures, tastes, and colors. Although it’s known as Kani Salad in the West, the imitation crab meat used to make the dish is called kanikama in Japanese, so in Japan, the dish is known as Kanikama Sarada (カニカマ サラダ).

Kani means “crab” in Japanese, and kama is short for kamaboko, a traditional Japanese fishcake. Despite having “crab” in the name, kanikama is made from white fish such as pollock or cod. There’s some debate over who invented it, but it was created in the mid-1970s as a new style of kamaboko that has a similar taste and texture to crab meat. Combining these crab sticks with mayonnaise to make a salad has been around since the early days of kanikama, and both imitation crab and Kani Salad have since become popular around the world.

In my Kani Salad recipe, I use a combination of crunchy vegetables and slippery glass noodles to create a contrast of tastes and textures, while the creamy mayonnaise in the dressing is balanced out with a refreshing hit of tangy lemon juice and zest.

How to Make Kani Salad

The first thing you want to do is toss the sliced cucumber and julienned carrots with the salt to help draw out their excess water. This keeps the salad from getting soggy when you combine it with the dressing while giving the veggies a nice crunchy texture. Let these sweat while you prepare the other ingredients. Once the vegetables have started to become limp, you can speed things up by massaging them with your hand until the cucumbers have turned translucent. Gather up the veggies with both hands and squeeze as much water out of them as you can.

Then you want to rehydrate and cook the glass noodles by soaking them in a bowl of boiling water. How long it takes depends on how thick your noodles are, but mine took about 7 minutes until they were tender. Once they’re cooked, you can drain and rinse them with cold water. Be sure to squeeze out any excess water with your hands before adding them to the Kani Salad.

For the crab sticks, you want to shred them into thin strips by hand. This takes a bit of time, but the fastest way I’ve found to do this is to roll the sticks between your hands, applying a moderate amount of pressure. This causes the sticks to fall apart, and you can shred them the rest of the way with your fingers.

Add the shredded crab sticks, squeeze vegetables, cooked glass noodles, black sesame seeds, scallions, and mayonnaise to a bowl. Zest half a lemon over the salad using a Microplane, and then cut the lemon in half and squeeze some of the juice over the salad. How much lemon juice you add is a matter of personal preference, but I usually add about two teaspoons.

Toss everything together to distribute the ingredients evenly. I like to serve my Kani Salad on a bed of lettuce leaves garnished with some extra chopped scallions.

There’s a lot of room to improvise in this recipe, and you can substitute in other veggies such as julienned daikon radish or corn kernels. I also like to make a Spicy Kani Salad by adding some sriracha or black pepper to the dressing. You can also add pineapple or mango for a little extra sweetness or some fish roe such as tobiko for a nice poppy texture.

Other Japanese Side Salad Recipes

What is Kani Salad?

Kani salad is a Japanese crab salad made of imitation crab and vegetables such as carrots and cucumbers. It’s a popular side dish at sushi restaurants outside of Japan and a popular home-cooked dish within Japan, but it’s not something you’ll find on the menu at restaurants there.

Where can I get Kani Salad?

Kani salad usually appears on menus at modern sushi restaurants in the US. However, it’s an easy dish to make at home, so give this Kani Salad recipe a try the next time you’re craving it.

Can I use real crab meat?

Yes, real crab meat will work fine. If it’s been frozen once, you’ll want to lightly squeeze it to get rid of any excess water, so it doesn’t make the salad soggy.

Various salads, made using crab sticks and mayonnaise, have existed in Japan since kanikama was invented there. However, these are modern home-cooked dishes and are rarely found in restaurants in Japan. One notable exception is at low-cost kaiten sushi (conveyor belt sushi) restaurants, which sometimes serve a mixture of shredded crab sticks and mayonnaise in gunkan maki.

How do you pronounce Kani Salad?

The Japanese name for Kani Salad is kanikama sarada, and it’s pronounced as follows (read the italicized parts). 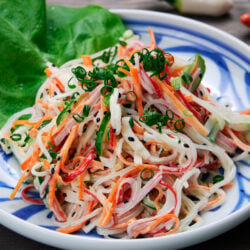