If you’ve ever gone to Japan and asked for a seaweed salad only to get a strange look, followed by a dish that’s not quite what you expected, you might have questioned whether seaweed salad is even Japanese. When translated literally, seaweed salad is Kaisou Sarada (海藻サラダ) in Japanese; however, this refers to any salad with seaweed on top, not the bright green sesame oil seasoned side dish we’re used to getting at sushi restaurants in the States.

The good news is that there is a very similar salad made by home cooks in Japan, and it’s far more healthy than the packaged ones you can buy, which are often loaded with food coloring and MSG.

There are hundreds, if not thousands, of different seaweed in the world’s oceans. They’re not all edible, but many of them are, and they each have a unique color and texture. That’s why I usually prefer calling these sea veggies rather than seaweed.

Most seaweed salads include more than one kind of seaweed, and you can buy a seaweed salad mix that will come with a blend of different types of seaweed. Here are all the different kinds of sea vegetables included in my mix. Don’t feel like you need to find one with all of these, but the more variety your mix has, the more colors and textures your salad will have.

As for the dressing, Japanese-American style seaweed salad gets its trademark flavor from toasted sesame oil, which is combined with soy sauce, sugar, vinegar, and sea salt. This creates a sweet, savory and tangy dressing brimming with the nutty flavor of toasted sesame.

I like the warm spicy kick that ginger adds, so I’ve also added some ginger juice to the sauce; this imparts a ginger flavor without the tough fibrous bits of ginger getting in the way. To make ginger juice, grate some ginger and then pass it through a strainer, pressing on the solids to get all the juice out.

I also wanted my salad to have a milder flavor that won’t have you reaching for a glass of water after every bite, so I haven’t used a ton of salt or sugar in the dressing. If you want to make it more like the store bought kind, increase the amount of sugar and salt.

How to Make Seaweed Salad

The first thing you need to do is rehydrate the dried seaweed. Although most seaweed will rehydrate in about 6-7 minutes, it takes much longer than that for the moisture content to reach equilibrium within the thicker parts of the seaweed. The problem is, if you soak the seaweed for too long, it will get soggy and water down the dressing. That’s why I like draining it at around the 6-7 minute mark and then let it rehydrate the rest of the way in the dressing.

While the seaweed is soaking, whisk the toasted sesame oil, soy sauce, rice vinegar, sugar, salt and ginger juice together.

Once the seaweed has rehydrated, drain it in a strainer. Then you want to gather it up with your hands and gently squeeze out any excess water.

Now you can toss the seaweed together with the dressing and add in the toasted sesame seeds and chopped scallions. You can eat it right away, but I’d recommend letting it sit for at least an hour before eating. It will be even better if you leave it in the fridge overnight.

I know some seaweed salads are a bit spicy, so you want more heat, try adding some chili flakes, or a chili paste like sambal oelek or sriracha to the dressing. It’s also good with a bit of garlic in the dressing.

In Japan, seaweed salad is often dressed with Ponzu, which is a citrus sauce made with yuzu juice, soy sauce, and a bit of sugar. It’s light, refreshing, and perhaps my favorite way of dressing this nutrient-dense salad.

Sorry to break it to you, but if you’ve been eating seaweed salad because you thought it was healthy, I have news for you. That neon green color that many seaweed salads have is not the natural color of seaweed; it’s food coloring. Places that serve this kind of salad also usually buy it in tubs pre-seasoned, which also means it’s probably loaded with corn syrup and MSG. The good news is that by making it at home, you can get all the vitamins, minerals, antioxidants, and prebiotics naturally contained in seaweed without all of the extra stuff that gets added in commercial seaweed salad.

Where to buy Seaweed Salad? 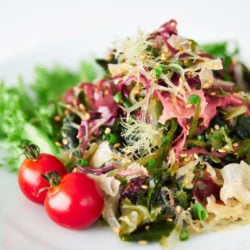