Kitsune Udon literally means “fox udon,” but don’t worry, there are no foxes involved in making the dish (it’s a reference to Japanese mythology). Despite having an unusual name, it’s the most popular udon dish in Japan and also happens to be one of my personal favorites.

With thick, chewy noodles in piping hot vegan-friendly dashi broth, the defining feature of Kitsune Udon is the sheet of savory-sweet fried tofu on top, which is known as Inari Agé. In this easy recipe, I will show you how you can put together both components of this comforting bowl of noodles from scratch.

Why This Kitsune Udon Recipe Works?

How to Make Kitsune Udon

To prepare the broth for the udon soup, steep the konbu and dried shiitake mushroom in the water until they rehydrate. Depending on how thick your ingredients are, this can take up to an hour.

Bring a large pot of water to a boil. Check your package of udon noodles to see how long they’re going to take to cook. If you’re using noodles that take more than 10 minutes to boil, I’d recommend adding them to the boiling water before you start making the seasoned tofu. If they take less time, you can start them after the tofu is done, but before starting the soup.

To remove excess oil from the aburaage, bring a pan of water to a bowl and add the fried tofu. Flip it over a few times until the water starts getting cloudy. Next, transfer the aburaage to a cutting board, and slice it in half. If your shiitake has rehydrated already, you can also trim the stem off and cook it together with the aburaage.

Wash out the pan you boiled the tofu in and add the sugar, sake, water, and soy sauce. Bring this to a boil, and then add the aburaage and shiitake. Simmer the fried tofu pouches flipping repeatedly until there is almost no liquid left in the pan and the Inari Agé is golden brown. Remove the pan from the heat and set it aside while working on the soup.

Remove the konbu (and shiitake if you haven’t already) and strain the stock through a fine-mesh sieve into a saucepan, leaving the last bit of liquid behind (it can be gritty). Add the soy sauce, sugar, and salt to this and bring the mixture to a boil. Use a spoon to skim off any scum that floats to the surface. Lower the heat all the way and keep the broth warm until your udon is done.

To assemble the Kitsune Udon, add the soup to a serving bowl. Add the cooked udon to the soup. Top with the Inari Agé, scallions, and yuzu zest and serve with a sprinkle of Shichimi Togarashi.

The noodle bowl with the cat, the hand-painted condiment box, and the gold chopstick rest shown in the photos are available on Musubi Kiln. They have a fantastic selection of classic and modern Japanese ceramics and tableware, and they ship worldwide. You can get 5% off your order by using coupon code “NORECIPES” at checkout.

What is Kitsune Udon?

In Japanese mythology, the Shinto god of rice is said to have the ability to transform into a white fox. Inarizushi is often presented as an offering to the rice god as a prayer for a good harvest because they look like bales of rice. Kitsune Udon (literally “fox udon”) gets its name from the association of Inari-Age with this shape-shifting god.

How do you pronounce Kitsune Udon?

Kitsune Udon is a five-syllable name that is pronounced as follows (read the italicized parts.)

How do I make udon noodles?

Udon noodles are made with flour, water, and salt, making them relatively simple to make at home. I have a recipe for homemade udon if you want to try making it yourself.

Can you eat Kitsune Udon cold?

Kitsune udon is typically eaten hot as a noodle soup, but it can also be served as Hiyashi Kitsune Udon. This is usually made with chilled udon noodles and a bowl of concentrated udon broth as a dipping sauce. It can also be served with the broth simply chilled.

This recipe uses a konbu and shiitake mushroom dashi, making it both vegetarian and vegan friendly. However, if you aren’t making it yourself, be careful as many versions contain katsuobushi in the dashi stock used to make the soup. 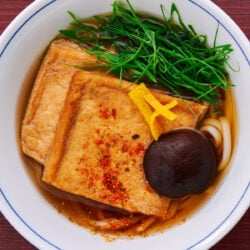