Although it is considered western-style food (洋食 – yōshoku) in Japan, Cream Stew(クリームシチュー) is a Japanese invention that was likely inspired by a few dishes from the West, including Irish Potato Soup, Banquette de Veau, and Poulet à la Normande. The first printed reference to a stew made with milk appears in a 1924 book by Kaneko Tezuka, and after WWII, a stew made with milk powder was introduced into school lunches to combat malnutrition.

Cream Stew went mainstream when House Foods introduced a powdered roux product in 1966 that made the dish’s preparation easy. These days it’s common to use bricks of Cream Stew roux similar to the blocks used to make Japanese-style curry.

I wanted to create a recipe from scratch that captures the silky smooth texture and rich umami of the blocks without significantly increasing the effort required to prepare it. After several rounds of testing, I’ve come up with a new method for making Japanese Cream Stew from scratch that’s easier and more foolproof than any method I’ve been able to find online.

Roux is just a mixture of fat and flour used to add thickness and richness to sauces and stews, ranging from bechamel to gumbo. It’s most commonly made by cooking butter and flour together, but for this Cream Stew, I wanted a pure white roux that wasn’t going to break when it gets added to the liquid. Since the stew itself is made with stock, the roux also needed to be creamy enough to taste like it was cooked with milk. I’ve come up with a simple hack inspired by my Chicken Paprikash recipe. Instead of cooking the roux in butter, I mix the cream with flour and milk powder, making a snow-white roux that you can temper with the hot stock from the stew. This literally melts into the stew and thickens it, and the process makes it almost impossible to break or end up with clumps.

How to Make Cream Stew

Heat a large heavy-bottomed pot over medium-high heat. It’s always a good idea to use a heavy pot for stews because a heavy bottom indicates it’s made with a dense material, which dissipates heat more evenly. For this stew, in particular, it’s essential because it can burn easily.

Add the oil, onions, carrots, and potatoes and saute them while constantly stirring until the onions start turning translucent, but don’t let them brown. This will take about five minutes.

Add the stock, chicken, salt, white pepper, and bay leaf, and then bring the mixture to a rolling boil over high heat. You’ll notice that some oil and beige foam start to float to the surface. The foam is protein from the chicken(usually blood) and should be removed. I use a mesh skimmer to do this, but a spoon will work as well. Also, because we are adding a ton of cream at the end, I usually skim off as much of the oil coming out of the chicken as possible to keep the stew from becoming too heavy.

Once there’s no more foam rising to the surface, partially cover the pot with a lid and turn down the heat to maintain a gentle simmer. Set a timer for fifteen minutes.

While the stew cooks, par-boil the broccoli by adding it to a pot of boiling water along with a generous pinch of salt and cooking it for one minute after the water returns to a boil. Drain the broccoli and set it aside.

When the timer is up, open the lid and skim off any additional scum or oil that’s accumulated on the surface and then add in the mushrooms. Let this simmer for a few more minutes until the mushrooms are cooked through.

Now you need to temper the roux before adding it into the stew by adding a few ladles of hot liquid from the stew into the roux and whisking it together. This slowly raises the roux’s temperature so that it doesn’t break. It also allows you to dissolve it evenly before adding it to the stew, so you don’t end up with any lumps.

Pour the tempered roux into the stew and gently stir everything together. You want to bring it to a simmer for a bit to thicken the sauce, but do not let it come to a full boil. Add the broccoli in to reheat it and serve the cream stew with crusty bread or rice.

How do you pronounce Cream Stew in Japanese

What’s the difference between Cream Stew and White Stew?

Cream Stew is also known as White Stew (ホワイトシチュー) in Japan, and they are two different names for the same dish.

What anime, mango and TV shows does Cream Stew appear in?

Cream stew is an easy meal that shows up in homes and cafeterias around Japan because it’s comforting and feeds many people. That’s probably why it’s also made an appearance in many anime and manga, including The Secret World of Arrietty, Charlotte, Log Horizon, Goblin Slayer, and Case Closed (Detective Conan), to name just a few. Cream Stew recently appeared in an episode of the Netflix show The Makanai Cooking for the Maiko House.

Is it possible to make this vegan?

Yes, the substitutions you need to make are for the cream, powdered milk, and chicken. Starting with the chicken, you can substitution a combination of tofu and mushrooms. This will give you the umami of the mushrooms with the protein of the tofu. For the powdered milk, I’d suggest using coconut milk powder. Finally, for the cream to make the roux, you can substitute full-fat coconut cream. If your can of cream has separated, I’d recommend skimming off the thick part on top and using that (without the thin liquid at the bottom). 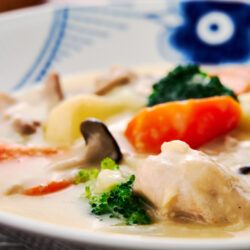