A traditional Japanese meal usually consists of a main dish, some side dishes, and a bowl of soup. This Japanese pork and vegetable soup lumps the main dish, soup, and sides together into a hearty stoup (stew+soup) that makes for a complete meal when paired with a bowl of rice. Easy to prepare, delicious and satisfying, Tonjiru is the ultimate winter comfort food. In fact, it’s so iconic that it’s featured in the opening credits of Midnight Diner, a show about a hole-in-wall diner in Tokyo that dishes out comfort food to its eclectic cast of patrons.

How to Prepare Burdock for Tonjiru

Burdock is a plant that grows almost everywhere. It gets its name from the prickly burs that form at the top of the stalk, and these burs were the inspiration for velcro. In Japan, we eat the long taproot that grows underground, and it’s known as gobo(牛蒡). It’s loaded with fiber and minerals, and its long shelf life makes it a popular root vegetable in winter soups like this Tonjiru.

Due to its high concentration of polyphenols, burdock tends to rapidly when exposed to air. You can arrest this by keeping any cut surfaces covered in acidified water. That’s why you always want to keep a bowl of water with some vinegar added when you’re preparing burdock.

After peeling it, I like to cut burdock using a method called sasagiri to whittle thin slivers of the taproot into the bowl of water.

How to Make Tonjiru

Tonjiru is a classic home-cooked meal, and the preparation can be as simple as throwing all the ingredients in a pot together and cooking them. That being said, a few steps can be added that make the finished dish taste even better.

The first thing you want to do is brown the pork, which gives the soup more flavor and umami thanks to Maillard browning. To do this, I heat a heavy-bottomed pot like a Dutch oven over medium-high heat until it’s nice and hot. Then I add a little oil along with the pork, spreading it into an even layer. You want to let the meat fry undisturbed until it starts to brown and then give it a stir to redistribute it and brown the other side.

Now you want to add the daikon, taro, carrots, shiitake, and scallion stems and stir-fry them until they start to become fragrant. You should have a nice layer of brown fond at the bottom of the pot at this point, and you want to deglaze this by adding the mirin. This releases the flavor from the pot while evaporating the alcohol in the mirin.

Next, you can add in the shirataki and dashi and then rinse the burdock to remove any vinegar taste and add that in as well. Turn the heat up to bring this to a boil, and then use a skimmer or spoon to skim off any scum that floats to the surface.

Once there’s no more foam rising, you can turn down the heat to maintain a gentle simmer and then blend in the miso. I recommend adding a bit of miso at a time and tasting it as different misos have differing amounts of salt. You also want to keep in mind that some of the soup will evaporate, so you want to start it off lightly seasoned, and then you can add more miso at the end to finish it off.

Let this simmer uncovered until the pork and vegetables are tender, which should take about twenty to thirty minutes.

When it’s done, garnish the Tonjiru with green onions and some shichimi togarashi and serve it with a bowl of rice and pickles.

Tonjiru literally means “pork soup” in Japanese, and it’s a popular wintertime meal made with thin slices of pork simmered with vegetables. The seasoning varies by household, but it’s most commonly seasoned with either miso or soy sauce.

What’s the difference between Tonjiru and Butajiru?

They’re one and the same. The difference is in how the characters 豚汁 are read. 豚 means pig, and can be read “ton” or “buta.” 汁 means soup and is read as “jiru” in this context. So some people call this Tonjiru while others call it Butajiru.

How do you pronounce Tonjiru/Butajiru?

How do you make vegan Tonjiru?

The “ton” in tonjiru literally means “pork,” so if you leave out the pork, it’s technically not tonjiru. That being said, I have a recipe for a plant-based soup called Kenchin-jiru that has a similar medley of veggies and no meat or seafood.

Is it possible to make Tonjiru with other meat?

Although it wouldn’t be tonjiru if it’s not made with pork, you can make this soup with other meat or seafood, such as chicken, fish, or clams. If you make it with chicken, use thigh meat as breast meat will end up dry and mealy due to the long cooking time. If you make it with seafood, I recommend cooking the vegetables first and then adding the seafood towards the end, so it doesn’t get overcooked. 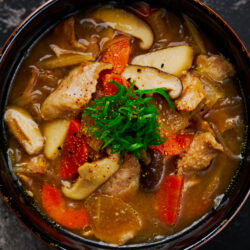