Mitarashi Dango is a classic Japanese snack and street food made by skewering rice dumplings and grilling them before glazing them in a thick sweet soy glaze. Recent appearances in popular anime like Demon Slayer (Kimetsu no Yaiba) have reignited interest in this traditional snack, so I visited the tea shop in Kyoto that’s credited with creating it to taste the original.

Back in my kitchen, I tested about a dozen iterations, including different blends of rice flour, different grilling methods, and different ratios of sauce ingredients. After all my experimentation, this is my favorite way of preparing Mitarashi Dango at home.

How to Make Mitarashi Dango

Set a large pot of water on the stove and turn the heat on to bring it to a boil. Soak some bamboo skewers in water to hydrate them. This will keep them from scorching while making the dumplings easier to skewer.

Add the shiratamako and salt to a large bowl and whisk them together. Next, pour the water over the flour and whisk it to evenly hydrate the flour. I usually do this with chopsticks because the small surface area of the sticks prevents the dough from sticking to them.

Once you have evenly hydrated crumbles in your bowl, use your hand to knead the dango dough into a smooth, even mass. In Japan they say the texture should be like your earlobe. You may need to make minor adjustments in the amount of water or rice flour due to differences in the moisture content of the rice flour and the temperature and humidity of the room you are making the dango in. If the dough is too sticky, add a bit more shiratamako. If the dough is too crumbly and doesn’t form a solid mass after a few minutes of kneading, add a teaspoon of water and knead it in. Repeat if necessary.

To portion and shape the dango, I recommend using a scale. Each ball should be about 9.5 grams or 1/3 of an ounce. The other option is to roll the dough into a rope and divide it into 16 pieces. Then you can roll the dough into spheres between the palms of your hands.

Once the water is boiling, carefully roll the dango balls into the water and cook undisturbed for a minute. Once the outer surface of the dumplings has set, stir them to ensure they’re not sticking to the pot. Let these cook until they rise to the surface (a total of 3-4 minutes).

When the dumplings are all floating, set a timer for 2 minutes. Once the timer is up, use a slotted spoon to transfer the dango into a bowl of cold water (don’t use ice water) to chill them and drain the dango.

Pierce the center of each dumping with a skewer and thread 4 dumplings onto each stick.

How to Grill Mitarashi Dango

After the dango have been boiled and skewered, the next step is to brown them, and there are a couple ways to do this.

The traditional way of browning Mitarashi Dango is to grill them over a shichirin (七輪). This is a Japanese-style ceramic grill heated using binchoutan (備長炭), special hardwood charcoal that emits very little smoke. The skewers of dango are placed on a mesh metal grill until they’re lightly charred on one side and then flipped to grill the other side.

Here are 3 modern ways I’ve tried to achieve browning on the dango, and I’ve listed them in my order of preference.

How to Glaze Mitarashi Dango

Once the dango skewers have been grilled, the final step is to glaze them to give them their tawny mirror finish.

The sauce tends to thicken more once cooled, but you also don’t want to have the sauce reduce too much and get gloppy, so the trick is to have the sauce components mixed in the pan and to start boiling the sauce to thicken it once you’ve begun grilling the dango balls. This will ensure they finish up at about the same time, so you can spoon the glistening glaze over your hot Mitarashi

What is Mitarashi Dango?

Mitarashi Dango are skewered rice dumplings that have been grilled and glazed with a sweet and savory sauce. The rice dumplings are made with glutinous rice flour and boiled before being skewered and grilled to give them a toasty flavor. Unlike tricolored hanami dango, Mitarashi dango does not have any color or flavor added to the dango dough.

Grilled rice balls have been a thing for at least the past 700 years, but historically they were glazed with just soy sauce. Kamo Mitarashi Chaya, a tea house near Shimogamo Shrine in Kyoto, is generally credited with creating the signature sauce used to glaze modern Mitarashi Dango.

How does Mitarashi Dango taste?

Most of the flavor comes from the thick and shiny Mitarashi Dango Sauce used to glaze the dumplings. It’s made with a combination of sugar, soy sauce, and starch, giving it a sweet and savory taste that’s a little sweeter than teriyaki sauce. The dango are soft, springy, and chewy and have a nutty rice cracker flavor due to the way they’re grilled at the end.

How do you pronounce Mitarashi Dango?

Mitarashi Dango is a 7-syllable name pronounced as follows (read the italicized parts).

mi like meat
ta like tonic
ra the “ra” sound does not exist in the English language, and the best way to make it is to say the word “romp” with the tip of your tongue at the front of your mouth.
shi like sheet
da like dot
n like night
go like ghost

As long as the sugar you use is plant-based, this Mitarashi Dango recipe is vegan and vegetarian friendly. 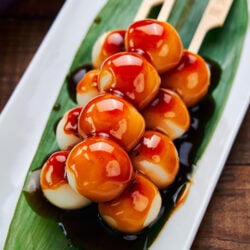