Anko forms the basis of most traditional Japanese pastry, so having a good sweet Red Bean Paste recipe is a must if you want to delve into the world of wagashi. The traditional process involves hours of soaking, simmering, and stirring to make. Growing up, it was always a treat when my mom made a batch, but I remember one time when she almost burned the house down after leaving a pot of red beans unattended.

The good news is that I’ve spent the past few years working on a simplified recipe for making Anko. The process I’ve developed takes advantage of some modern science to significantly reduce the time and effort required to make a delicious Red Bean Paste with a creamy texture that rivals the Anko made in the best wagashi shops in Japan.

The first thing you want to do is wash the Adzuki beans. I usually wash them in a strainer, but you can also do this with a bowl. If you’re using high-quality beans, you shouldn’t have an issue with bad beans or foreign debris, but you may want to give them a once over to ensure you don’t have any red beans with holes in them or pebbles or twigs.

Add the washed red beans to a pressure cooker and add the water, baking soda, and salt. Affix the lid, set it to “high,” and bring the cooker up to pressure over high heat. Reduce the heat until you have a constant stream of steam escaping, but it doesn’t sound like a jet about to take off. Set the timer for twenty minutes.

If you’re using an electric pressure cooker like an Instant Pot, you can follow the same times, adapting the processes for your setup.

If you don’t have a pressure cooker, you can simmer the beans in a regular pot, but it could take up to an hour for your beans to soften. You will also likely need to add some water part of the way through the cooking process to keep the beans from burning.

Once the timer is up, cut the heat and let the pressure fall naturally. I usually let it sit for another twenty to thirty minutes. If you are not using a pressure cooker, you can skip this step and proceed once your beans are soft enough to smash between your fingers.

Put a strainer over a frying pan (I recommend using a non-stick pan for this), and drain the cooked red beans. Use a spatula to press on the beans to get as much liquid out as you can, but don’t press so hard that the beans start coming through.

Add the sugar to the bean liquid and turn the heat onto high heat. As the mixture comes to a boil, skim off any scum that floats to the surface. Continue boiling the liquid until it’s about the thickness of maple syrup and has reached a temperature of 230°F (110°C).

Dump the beans into the pan with the syrup and stir the mixture together. Now you want to continue cooking while stirring the beans until it’s thick enough that you can run a spatula across the pan without having the Anko immediately flow back into the path you traced with your spatula.

Let the Red Bean Paste cool to room temperature and then transfer it to a sealed container and refrigerate it overnight. This step is very important as it gives the baking soda time to neutralize while allowing the flavors in the Anko to meld and mature.

What is Anko or Red Bean Paste?

Anko  (あんこ or 餡こ) is a sweet red bean paste made from Adzuki beans that have been cooked until tender and then sweetened with sugar as it is cooked down into a thick paste. It can be prepared with whole beans remaining for tsubuan (粒あん), or it can be mashed and passed through a sieve to make a smooth paste known as koshian (こしあん).

How do you pronounce Anko?

Anko is a two-syllable name that is pronounced as follows:

As long as the sugar you use is vegan-friendly, this Red Bean Paste recipe is vegetarian and vegan.

Can you taste the baking soda in the Anko?

If you eat the anko right away there will be a slight bitterness to the Anko from the baking soda. To eliminate this, all you need to do is leave the anko in the fridge overnight. This allows the baking soda time to neutralize and you will not be able to taste it the next day.

Tsubu-an literally means “chunky anko” while Koshi-an means “strained anko”. As the names imply, Tsuban leaves the beans intact while Koshian has the beans smashed and pressed through a strainer to achieve a smooth consistency.

What to make with Red Bean Paste?

Red Bean Paste forms the basis for many types of wagashi (和菓子) or traditional Japanese sweets. For example, rice cakes can be stuffed with Anko to make Daifuku (大福)or various types of mochi such as Kashiwa Mochi, Sakura Mochi, or Kusa Mochi. The sweet Red Bean Paste can also be wrapped around a ball of mochi rice to make Ohagi (お萩) or Botamochi (ぼたもち). The Anko can be pureed and gelled to make Yōkan. It can be turned into a soup to make Oshiruko (おしるこ) or Zenzai (ぜんざい). Stuffed into buns it becomes Anpan (あんパン) stuffed between pancakes it becomes Dorayaki (どら焼き), and stuffed into a fish-shaped pastry it becomes Taiyaki (たい焼き). In the photo below, I’ve added some Anko into a rice wafer to make Monaka (最中), which has a light crispy texture and wonderful toasted rice aroma. 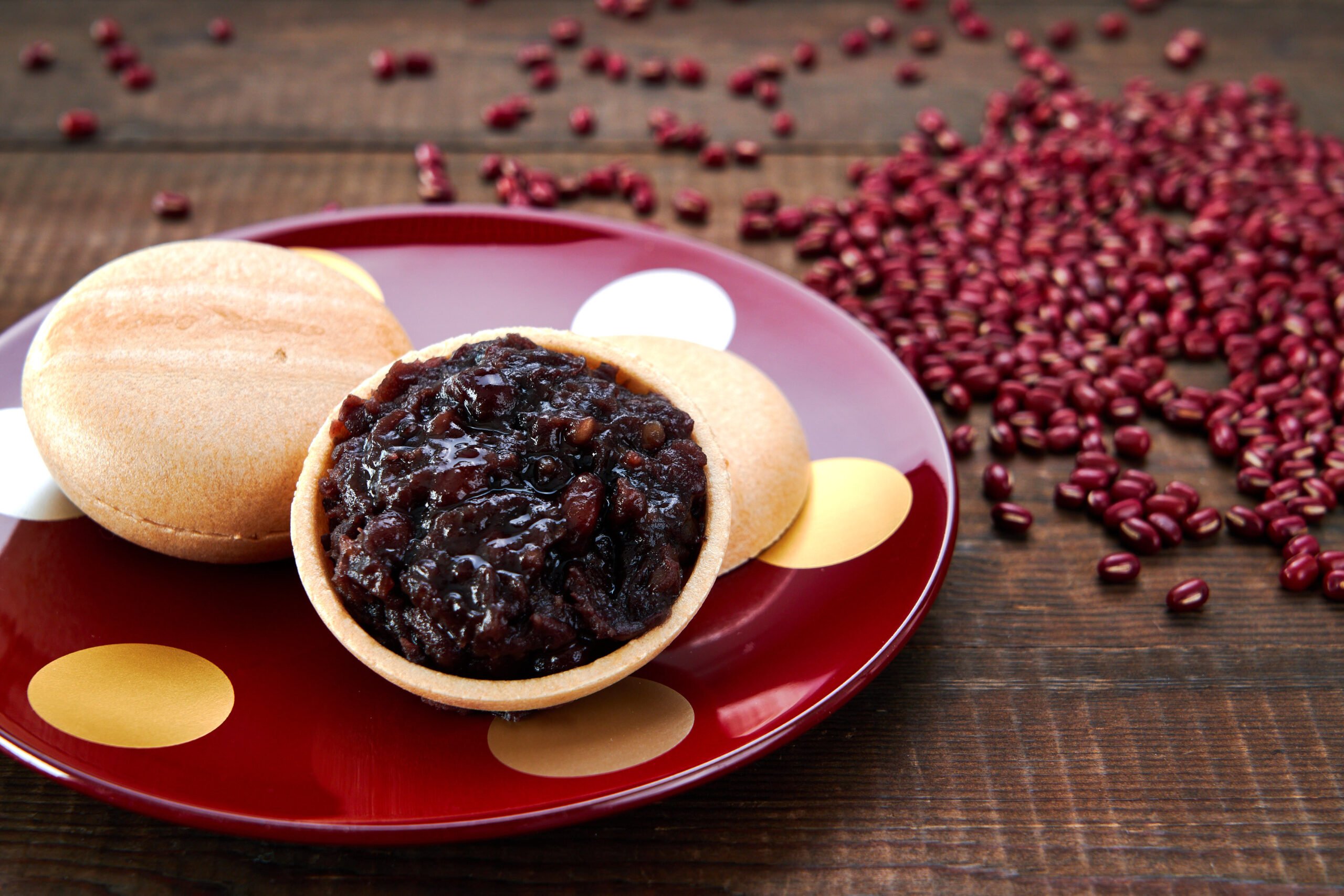 How much Anko does this recipe make?

This recipe will make about 750 grams of Red Bean Paste. 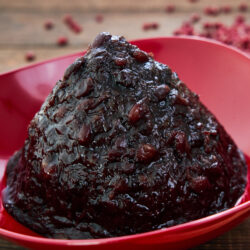