Traditional Japanese cuisine is hyper-local and seasonal, and when autumn rolls around, Takikomi Gohan is a home-cooked favorite. That’s because autumn is the season where shinmai(新米) or new rice is released after the harvest, and it’s when rice is considered to be at its best.

The name Takikomi Gohan literally means “cooked with rice,” so there are a lot of variations, but most of them involve other autumn ingredients like mushrooms, chestnuts, or sweet potatoes. The style-of Takikomi Gohan I want to show you in this recipe is also known as Gomoku Gohan because it includes a variety of mixins.

It’s often made with chicken and dashi stock, but for this recipe, I’m using a shiitake mushroom-based dashi along with other umami-packed ingredients to make a vegan-friendly Takikomi Gohan that’s brimming with flavor.

How to Make Takikomi Gohan

The first thing you want to do is rehydrate the shiitake mushrooms in cold water. This will take anywhere from 30 minutes to a few hours, depending on the size of your mushrooms. You can also speed this up to about 10 minutes by using boiling water.

Once the shiitake has rehydrated, squeeze them with your hand to remove any excess water and then trim off the tough stems. Slice the caps up and and set both the shiitake mushrooms and soaking liquid aside.

Put the rice in a strainer and rinse them under cold water while agitating the rice with your hand until the water runs mostly clear. Shake the rice to drain it well and then transfer it to a deep, heavy-bottomed pot.

Measure 1 3/4 cups of the shiitake soaking liquid into the rice, being careful not to get the grit at the bottom of the bowl into the rice. Then let the rice soak for at least 30 minutes.

Heat a frying pan over medium heat, and then add the vegetable oil and the mushrooms and veggies. Stir-fry until everything has halved in volume and the veggies have started to wilt.

Add the sake, soy sauce, sugar, and konbu cha, and continue stir-frying with the seasonings.

Once the liquid has evaporated from the mushrooms and veggies, spread them on top of the rice. Be careful here not to mix them into the rice, or your rice won’t cook evenly. Cover the pot with a lid and turn the stove on to high heat.

When there’s steam escaping from the lid of the pot, turn the heat down as far as your stove will go and set a timer for twelve minutes.

Turn off the heat on the rice once the timer goes off and set another timer for 10 minutes. Do not open the lid as you need to retain the heat in the pot for the rice to properly steam.

Once the rice is done steaming, open up the lid and use a spatula or rice paddle to fold the veggies and mushrooms into the rice.

Takikomi Gohan (炊き込みご飯) literally means “cooked with rice” in Japanese, and it refers to a class of rice dishes where rice is cooked together with other ingredients. Depending on the part of Japan you are in, it may also be known as Kayaku Gohan (かやくご飯). This particular Takikomi Gohan recipe is for a specific type of mixed mushroom and vegetable rice that’s also sometimes known as Gomoku Gohan (五目ご飯).

How do you pronounce Takikomi Gohan?

Takikomi Gohan is a six-syllable name that’s pronounced as follows:

How do I make Takikomi Gohan in a rice cooker?

You can follow all the steps for preparing the vegetables and mushrooms. The amount of rice specified is 2 rice cooker cups. The only difference is that instead of measuring out 1 3/4 cups of shiitake soaking liquid, you can just add the soaking liquid straight to the rice cooker bowl up to the 2 cup marker. Then saute the veggies as per the recipe. When they’re cooked, just spread the veggies and mushrooms over the rice (without stirring) and then set the rice cooker how you normally would.

What can I do with leftover Takikomi Gohan?

If you end up with leftovers, divide and shape the remaining rice into onigiri while still warm. These make a great addition to a bento box lunch. You can follow my tutorial for shaping onigiri. Then you can wrap the onigiri individually with plastic wrap and refrigerate them or freeze them if you want to keep them for longer than a few days. Either way, you will want to warm them up in the microwave before eating them, as the cold temperatures will cause the rice to retrograde and get hard. 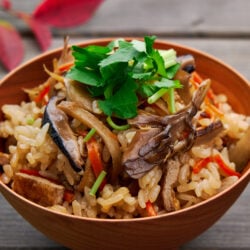