Although it sounds Western, Doria (ドリア) is a uniquely Japanese dish that was created by a Swiss chef in Japan in the 1930’s. Traditionally it was made by layering rice with seafood and then covering it with a blanket of creamy béchamel sauce. This was then topped with a layer of cheese that was melted and browned in a hot oven. It’s cheap, comforting, and satisfying, which has made it a staple of home cooking.

Ironically, Doria is considered a Western-style dish in Japan, so most Japanese people are surprised when they learn it doesn’t exist in the culinary repertoire of other countries.

What are some variations of Doria?

Although Doria started out as a rice gratin, these days, the name is used to refer to almost any dish that has a layer of rice, a layer of sauce, and a layer of cheese. The rice layer can be plain, pilaf, or fried rice. The sauce can be anything from stew, to meat sauce, to curry, and the cheese can be anything that melts. 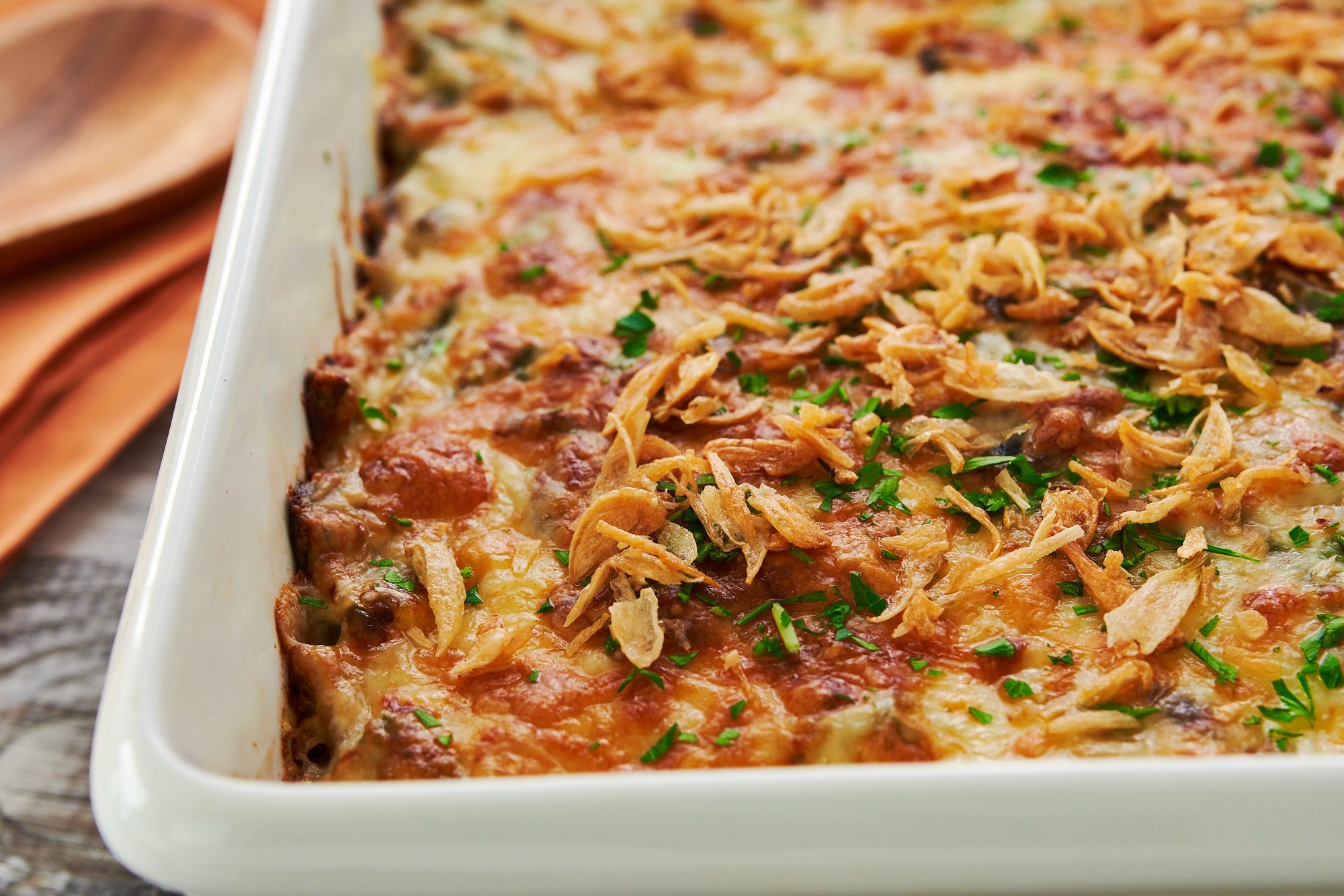 How do I make Doria?

The main component of this Doria is the mushroom and green bean béchamel, and while it’s not complicated, there are a few tricks to ensure it goes well. The first thing is to saute the mushrooms and onions thoroughly. This results in Maillard browning, which creates layers of flavors that tastes more complex than the basic ingredients this is made from.

Once the mushrooms have started to caramelize, they go into a bowl while you make the béchamel sauce. Don’t let the French name scare you; it’s just a creamy gravy made with a butter and flour roux and milk. The trick here is rapidly cool the roux by turning down the heat and dumping in the cold milk. This keeps the flour from cooking too quickly, giving you a chance to dissolve the roux in the milk for a smooth sauce that’s free of lumps. The green beans, which I blanch first, get added into the sauce at the end, along with the sauteed mushrooms.

This gets assembled in a buttered casserole dish with a layer of rice, topped with the green bean and mushroom béchamel, and then finally a layer of cheese. I like using a mixture of Gruyere for flavor and Mozzarella for stretch, but you can use almost any cheese that melts, such as Fontina, or Raclette.

As for the oven, you want it to be hot enough to get a nice browned crust on top, but not so hot that the cheese starts burning before the rice is reheated, and the sauce is bubbly.

Finally, I like to top this particular Doria with some fried onions, which not only adds a crisp texture on top, it also fortifies the flavor of the caramelized onions in the sauce.

What kind of mushrooms can I use for this Doria?

I’ve kept it pretty simple with a mix of button mushrooms and shimeji mushrooms, but you can use almost any mushroom with a lot of flavor, like Maitake, Chanterelle, Black Trumpet, or Porcinis. 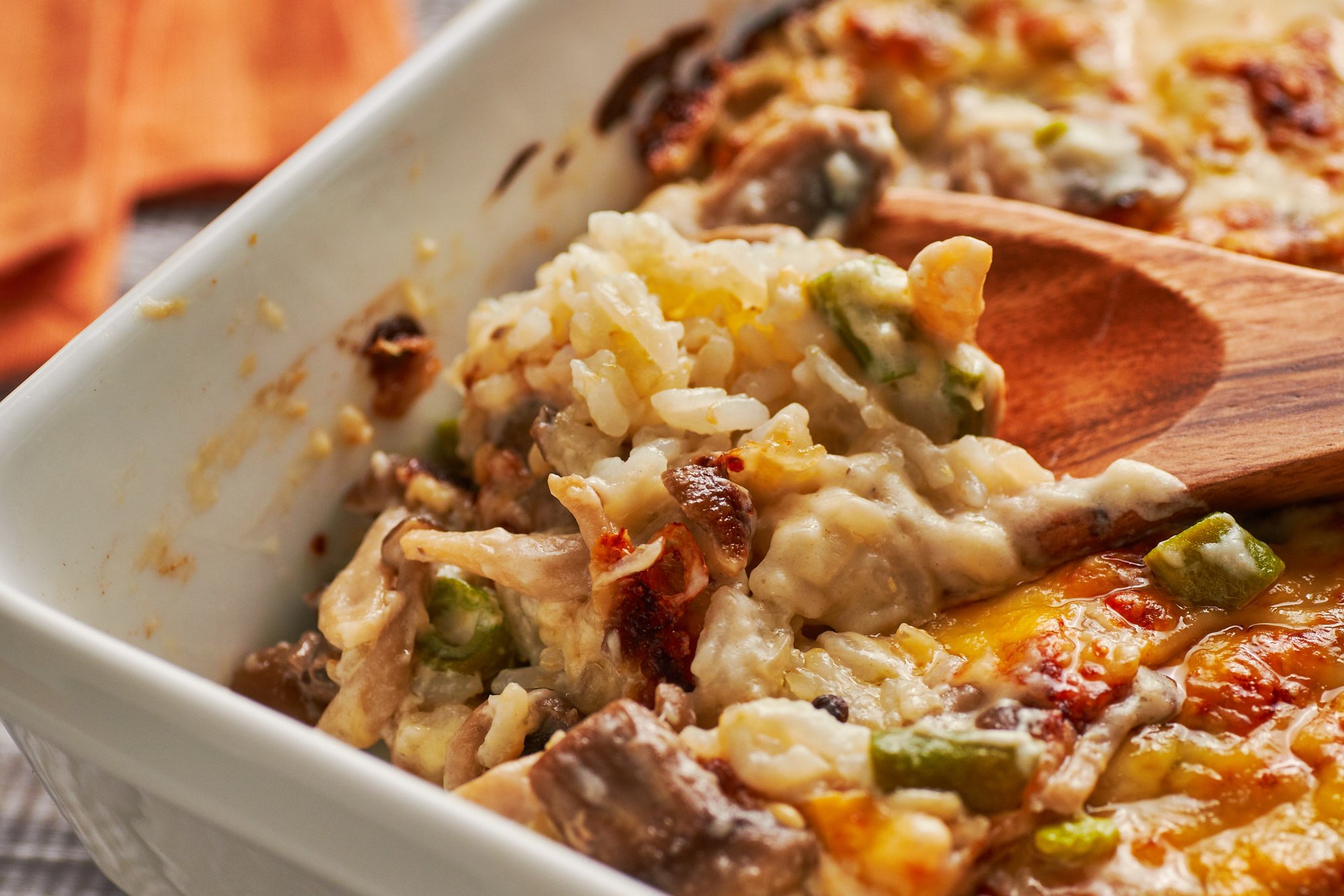 Can I add chicken or seafood to this Doria?

I’ve made this Doria vegetarian, but it’s fairly easy to add shrimp, chicken or some other protein to this. When you add it, depends on how long it takes to cook. For example, if you’re using chicken, you’ll probably want to brown the chicken first in the pan before you saute the mushrooms (and then transfer it to a bowl while you brown the mushrooms). If you’re using a fast-cooking protein such as shrimp or fish, you can probably add into the béchamel before you assemble the Doria.

How can I make vegan Doria?

Because there’s tons of flavor imparted by sauteing the onions and mushrooms, it’s fairly easy to make this plant-based. Just replace the butter with coconut oil for all the components, substitute your favorite plant-based milk, and add a little nutritional yeast to the béchamel. As for the cheese on top, you can either top it with coconut oiled panko breadcrumbs, or make a plant-based parmesan cheese with walnuts, nutritional yeast, and salt ground up in a food processor to sprinkle on top.

Can I make Doria ahead of time?

Doria is great for parties and potlucks because you can assemble it ahead and time and then bake it just before serving it to ensure the cheese is gooey, and the béchamel is piping hot. 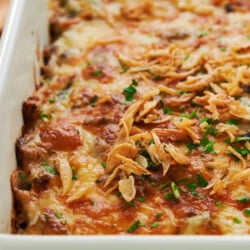