Tonteki, which literally means “pork steak” in Japanese, is made by frying a thick-cut pork chop with garlic and glazing it with a savory, sweet, and tangy sauce. It’s a regional specialty of Yokkaichi city in Mie prefecture, where it was invented.

It’s also the headline dish of season 1, episode 3 of Midnight Diner: Tokyo Stories, but the dish featured in Midnight Diner is significantly different from the original. The Master himself says the sauce is light and might not satisfy someone who’s had the original. Having tried it both ways, I can tell you that the Yokkaichi original is leagues better than the one featured in the show.

The first thing you want to do is get all of the Tonteki sauce ingredients, including the Shaoxing wine, soy sauce, Worcestershire sauce, ketchup, and honey, in a bowl and whisk them together.

To prepare the pork steaks, use scissors or the tip of a knife to cut through any connective tissue in the meat about a quarter-inch apart. It usually runs along veins of fat, so cutting along the fat is a good place to start. Be sure to get each pork chop from both sides.

Season both sides of the pork by sprinkling it with salt and pepper and rubbing them in a bit. Then you can dust the surface of the meat with the flour. The goal is to get a thin, even coating.

Next, you want to fry the sliced garlic in the vegetable oil over medium-low heat until it’s light tan in color. One way to make this easier is to tip the pan so the oil pools on one side of the pan to deep fry the garlic. You can start removing the ones that brown first, but when most of them have browned, you’ll want to get them out of the pan quickly so they don’t get too dark or they’ll get bitter.

Then you want to pan-fry the pork steaks in the garlic-infused oil. I usually let them fry undisturbed until they’ve started to brown on one side and then flip them over and brown the other side. Then you can then flip them over periodically until they’re cooked through. If you have an instant-read thermometer, you want to get it up to an internal temperature of 145°F (63°C).

When the meat is cooked through, transfer it to a plate. It may seem like a bit of a waste, but the garlic oil already served its purpose, so you want to wipe it out of the pan using paper towels and tongs. Otherwise, the sauce will end up greasy.

Now, you can add the sauce ingredients to the pan, turn up the heat, and boil the mixture to reduce the sauce. Once the sauce is thick, and the bubbles are large and glossy, add the Tonteki back in and repeatedly flip it over until the sauce forms a thick glaze around the meat.

Tonteki is a Japanese-style pork steak that was created at a Japanese-style Chinese restaurant called Rairaiken in the city of Yokkaichi, Japan.  The name is a play on bifuteki (ビフテキ), the Japanese word for beefsteak, by replacing bifu with ton, which means “pork.” The original version is made by cutting slits into a pork chop like the fingers on a glove, which is why it is also sometimes called gurōbuyaki (グローブ焼き).

How do you pronounce Tonteki?

Tonteki is a three-syllable name pronounced as follows:

Can I make tonteki with chicken (or beef, or lamb, or tofu?)

Since pork is in the name, you couldn’t call it Tonteki anymore, but the preparation method can be used for any relatively tender cut of meat, including: chicken, beef or lamb steaks, or even tofu. The need to cut connective tissue will depend on the toughness of the meat, and cooking times will vary, but otherwise, you can use the same steps described in this Tonteki recipe.

How do you serve Tonteki?

Tonteki is typically served over a bed of thinly shredded cabbage with garlic and lemon. To make it a complete meal, I recommend serving it with a bowl of rice and miso soup. 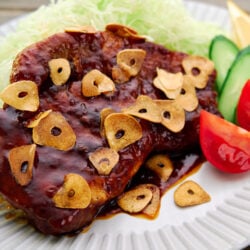