Because youmian (lit. thin noodles) is so thin, if they sit in the broth too long, they get soggy. That’s why wonton noodles are served in small bowls with the wontons underneath the noodles. This keeps the noodles afloat, insuring you have very al dente noodles that border on crunchy (in a good way)

If you’ve ever had shrimp in an authentic chinese restaurant, you’ve probably noticed that the shrimp are extremely supple. To say they’re crunchy is a weird description but they’ve traded in the normally soft and stringy texture for a firm springy texture. In Chinese, there’s even a phrase for this: shuǎng cuì (爽脆), which literally means “invigorating and crisp”. Getting your shrimp shuǎng cuì is of utmost importance for most Chinese dishes and wontons are no exception.

Traditionally shrimp were soaked under cold running water for hours to achieve this texture. As it turns out, the texture has less to do with the temperature of the water and more to do with the fact that in some areas of China, the water is naturally alkali. You can replicate this at home, by adding something alkali to your water to raise its pH. While baking soda will work to some extent, using a strong base like potassium carbonate works better. In case you were wondering, this is also what gives ramen noodles their yellow color and firm bite.

In the photo above, the shrimp on left was soaked in a potassium carbonate solution for 24 hours, while the one on the right was not.

Because the shrimp needs to be soaked, and the stock takes a bit of time, this isn’t a quick weeknight meal. But for your efforts, you’ll be rewarded with wontons that rival some of the best shops in Hong Kong in a rich savory broth that will have you rue the day you ever have to eat wonton soup at a Chinese American restaurant.

While it does take some time, it’s not difficult to prepare provided you can find a few items in the US. The traditional soup broth is made with dried flounder and shrimp, but I’ve found that dried pollock is a lot easier to find in the US and has a very similar flavor. It can be found in most Asian or Korean grocery stores as Bugeochae (북어채)

For the shrimp shells and heads, you can try asking your fish monger, but personally I just keep a Ziploc bag in the freezer which I add shells to every time I use shrimp. That way I always have a supply of shells and heads for making stock. Lastly the Potassium Carbonate is sold under the brand name Koon Chun in Asian grocery stores. You could also use food grade lye but you’ll have to experiment to figure out how much to add. 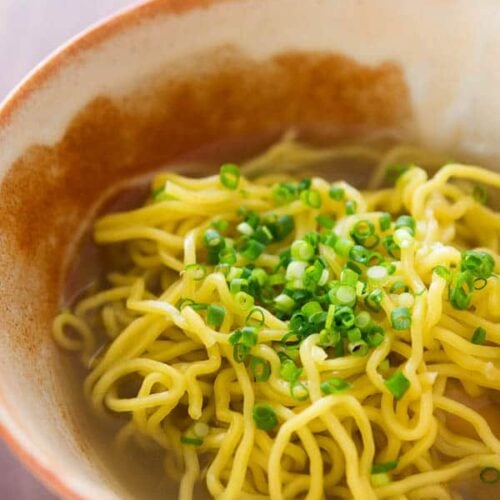 What do you think?41 Cancel reply