Tantanmen is a local Japanese variant of Sichuan Dan Dan Noodles. It was originally created to cater to Japanese tastes, but it’s developed into its own subgenre of ramen. These days, many Japanese noodle shops offer their own take, using their house broth as the base.

The key to any great ramen is in the broth, and Tantanmen is no exception. Ramen broths are usually made by boiling pork and or chicken bones for hours to get all of the flavor and collagen out of them. This is how you get the rich umami and unctuous mouthfeel of a good ramen broth. But I’ve found a few kitchen hacks to significantly reduce the time required to make a ramen shop quality Tantanmen in under thirty minutes.

How to Make Tantanmen Topping

First, you want to marinate the bigger portion of ground pork with the Tianmian sauce and soy sauce. You want the mixture to remain crumbly, so it’s best to do this with chopsticks, using pork that’s very cold.

Then, this gets stir-fried with some vegetable oil and broken up into small crumbs using a spatula or wooden paddle.

To make the tare, grind the toasted sesame seeds. You can use a mortar and pestle, spice grinder, food processor, or blender to do this. Next, add the ground sesame seeds along with the tahini, rayu, and toasted sesame oil to your serving bowl. If you’re making more than one portion, you can whisk these ingredients together in one bowl and then divide the taré evenly between your serving bowls.

How to make Tantanmen Broth

For the broth, you can reuse the same frying pan you used for stir-frying the topping without washing it (just make sure it’s big enough to hold all of the chicken stock).

Stir-fry the remaining ground pork, scallion stems, ginger, and garlic while breaking the pork up into small crumbs until the meat is fully cooked. Add the Sichuan pepper, soy sauce, and doubanjiang and continue stir-frying until all of the liquid has evaporated and the mixture starts to caramelize.

Add the chicken stock to the pan and bring the mixture to a boil.

Pour the hot soup into your serving bowl(s) with the taré and use a whisk or stick blender to emulsify the mixture into a creamy broth.

Bring a pot of water to a boil and blanch the greens.

Boil the noodles according to the time specified on the package in the water you used to blanch the greens.

Drain the noodles and add them to the soup. Top your Tantanmen with the pork topping as well as the greens and some chopped scallions for garnish.

Tantanmen (担々麺) is a Japanese noodle dish that can be prepared as a soup or dry. It’s based on Sichuan Dandanmian, which is a fiery sesame noodle dish from China. The Japanese version is said to have been popularized by Chef Chen Kenmin of Shisenhanten. Chef Chen is famous for popularizing many Sichuan specialties, including Mabo Dofu and Chili Shrimp in Japan, by adapting the flavor profile of the dishes to better suit Japanese tastes. For Tantanmen, he localized the dish by serving it as a noodle soup and reducing the spiciness. He also topped it with sweet and savory stir-fried ground pork. This spicy ramen recipe uses the classic flavor profile of Japanese Tantanmen as the base, but I love spicy foods and have added some of the heat back in my version.

What type of ramen is Tantanmen?

Tantanmen means “tantan noodles” in Japanese, so it’s usually not suffixed with the word “ramen.” Although it often appears on the menu at ramen shops, it does not fit within the usual ramen categories such as shoyu, miso, or tonkotsu.

How do you pronounce Tantanmen?

Tantanmen is a 3-syllable name that’s pronounced as follows:

What is Tantanmen broth made of?

Like most ramen, the broth for Tantanmen is a mixture of broth and taré. To save time and yet still get the flavor of a long-cooked broth, I use chicken broth that’s been fortified with browned aromatics such as garlic, ginger, and scallions, along with some ground pork. The taré component of this spicy ramen is sesame seeds in various forms. I use a combination of tahini, ground toasted sesame seeds, and sesame oil, along with a bit of rayu to bring the heat. 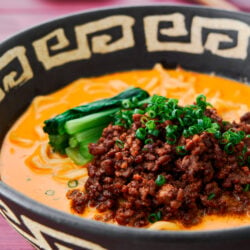