Yaki Onigiri  (焼きおにぎり) is traditionally made by grilling rice balls over charcoal until the rice starts to brown and crisp. Then they’re brushed with either miso or soy sauce and then roasted until the seasoning forms a toasty caramelized glaze on the outside of the onigiri. The flavor that the charcoal imparts is undeniably good, but the texture usually ends up being somewhere in between crunchy and chewy, and not in a good way.

These days, most people don’t have grills at home in Japan, so they are commonly made in a frying pan, but the oil can cause them to fall apart more readily, and it’s challenging to get enough glaze onto them to season them properly.

For my version, I’ve changed a few things to create a grilled rice ball that’s flavorful to the core and has an exterior that’s as crisp as a rice cracker.

How to Make Yaki Onigiri

When the rice is cooked, drizzle the soy sauce evenly over the hot rice and then use a wet spatula or rice paddle to evenly distribute the soy sauce. You want to use a folding and cutting motion to coat each grain of rice with the soy sauce, but use a light touch, so you don’t mash the grains.

Once the rice is uniform in color, flatten off the top and then divide it into thirds with the spatula (if you double the recipe, you’ll need to divide it into 1/6ths).

Shape each segment of rice into a rice ball. Click the link for instructions on shaping them by hand. Or you can wet an onigiri mold and use that. Unlike regular onigiri, you want to compact the rice well for Yaki Onigiri, so it holds its shape in the pan.

Place the formed onigiri onto a parchment paper (or plastic wrap) lined sheet and repeat until you’ve used all of the rice.

Put the potato starch in a tea strainer or other fine-mesh sieve, and then give the two large faces of the onigiri a light dusting of starch. It should look like your rice balls got hit with a light frost, not a heavy snowfall. Also, try to limit the amount of starch that gets onto the sides of the onigiri.

Heat a frying pan over medium-low heat until it’s moderately hot, and then drizzle in about half of the oil. Add the onigiri to the pan and then move them around a bit to make sure each one has some oil on it. Be careful not to allow the riceballs to touch each other, or they will stick together.

Let these fry until they’re crisp and golden brown. This will take anywhere from 7-10 minutes. The idea is to brown them slowly, so you get a nice thick crust of crispy rice, not just a layer of browning.

Once they’ve crisped on one side, flip them over. Add a bit more oil to the pan and move the Yaki Onigiri around to make sure you have some oil between the rice and the pan. You may not need all of the oil.

To finish them off, flip the grilled rice balls up on their sides and roll them around on each side to cook any stray starch that may have gotten onto the sides (white powder).

Serve the onigiri while hot, wrapped in perilla leaves (shiso or kkaennip) or nori.

What is Yaki Onigiri?

Yaki onigiri roughly translates to “grilled rice ball” (the literal translation is more like “grilled squeezed thing”). Traditionally it’s made by making a rice ball (which is really more like a rice triangle), and then grilling it on a screen over charcoal. These days, most people pan-fry them. This creates a crisp browned crust on the outside,  which gives the onigiri a toasty flavor that’s a bit like rice crackers. Nikumaki Onigiri is a modern version of Yaki Onigiri, where the rice ball is wrapped in a thin sheet of meat before being grilled and glazing it with teriyaki sauce.

How do you pronounce Yaki Onigiri?

Yaki Onigiri has 6 syllables and is pronounced as follows:

How long does Yaki Onigiri last?

Although it’s best to eat yaki onigiri right away, the crisp crust on this version will last for a few hours as long as you don’t cover it while it is still warm.

How do I use leftover Yaki Onigiri?

If you end up making more grilled rice balls than you can eat in one sitting, they are delicious in ochazuke, or Japanese “tea rice”. Just make some tea(I recommend houjicha) or dashi, heat the onigiri up in a microwave, and then pour the tea or dashi on top of the onigiri. It will lose it’s crispness, but the flavor of the caramelized rice and soy sauce gets released into the liquid, and it makes for a delicious breakfast.

Although this Yaki Onigiri is vegetarian, you can make it vegan-friendly by eliminating the butter or by using a plant-based butter instead. 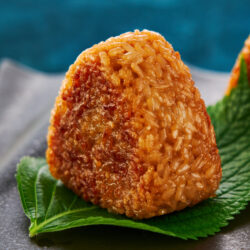