While chicken is the most common protein to cook Teriyaki, the method works great for other meats and even seafood. As the name suggests, Steak Teriyaki (照り焼きステーキ) uses beef steak in place of the chicken, which makes for a hearty entree, that’s delicious on a bed of hot rice. Making beef teriyaki involves a slightly different process than chicken, though, so here are all of my tips and tricks to ensure you end up with a juicy, flavorful Teriyaki Steak.

How to Make Teriyaki Steak

Trim any silverskin or connective tissue off of the surface of the steak. See the section in the FAQ about preparing hanger steak for more details.

Make the marinade by whisking together the ginger, garlic, sake, salt, and vegetable oil. Pour the mixture over the trimmed steaks and spread it around to coat evenly. Let this marinate in the fridge for at least an hour.

While you wait for the beef to marinate, you can prepare the sauce. Teriyaki sauce will keep for months, so I often make a big batch and store it in a bottle in the fridge. Add the soy sauce, sake, and sugar to a saucepan and boil it until it has the consistency of natural maple syrup. It will take about three to four minutes after it comes to a boil. As the sauce reduces, the sugar will cause the sauce to thicken, and it will want to boil over, so keep a close eye on it and reduce the heat periodically to avert disaster.

To grill the steaks, I like to do it in a cast-iron grill pan, but an outdoor grill, cast iron skillet, or even a regular frying pan will work. Whatever you end up using, the key is to get it nice and hot. Add the steaks to the pan and let it grill undisturbed until they have nice grill marks on one side (about 4 minutes). If you’re doing it in a frying pan, you’ll want to look for a nice brown crust to form on one side.

Flip the beef over, and grill the second side until you have nice grill marks on the second side (another 3-4 minutes). Depending on how thick your steak is, it should be rare to medium-rare at this point. Unless you’re a steak ninja, I recommend using an instant-read thermometer to check it for doneness.

When the steaks are cooked to your liking, transfer them to a tray and let them rest for 10 minutes before you cut them. This is important as it allows the temperature gradient to level off. It also allows the juices squeezed out from the muscle fibers to get reabsorbed into the meat, so they don’t end up all over your cutting board.

After the steak has rested, slice it against the grain. Because hanger steak is so tender, I usually go for relatively thick slices.

Drizzle the teriyaki sauce on top of the sliced steak, and then garnish the beef teriyaki with sesame seeds and scallions.

Beef teriyaki is loaded with flavor, so I usually steam some vegetables like broccoli or snap peas to go along with it. This is flavorful enough to be served with plain white rice, but to take it to the next level, try serving this with double garlic rice, or my Japanese fried rice. For side dishes, I like to serve this with Japanese-style potato salad, Hawaiian macaroni salad, or a green salad with wafu dressing. For rice, you

What is Teriyaki Steak?

Teriyaki means “shiny grilled” in Japanese and refers to both the cooking method and sauce (which gives the meat “teri” or shine). Teriyaki Steak is made by grilling a beef steak and then glazing it with teriyaki sauce.

What kind of steak is good for Teriyaki?

When it comes to steak, tenderness and flavor usually sit on opposite sides of the scale. Tenderloin is tender, but it doesn’t have much flavor, whereas chuck is good on the flavor side but tends to be tough. Hanger steak is a magical cut from the stomach area that manages to be both tender and flavorful, and it’s my favorite cut for making Teriyaki Steak.

How do I prepare hanger steak?

Hanger steak is actually two muscles joined in the center with a thin strip of connective tissue. Most butchers will split it in half and remove the gristle, but if yours came whole, you will want to cut it in half along one side of the connective tissue and then trim it off the other side. If it came untrimmed, it might also have some silverskin attached (a whitish film on the outside of the meat), which you will want to shave off with a sharp knife.

What goes with Teriyaki Steak?

Teriyaki steak is delicious served on a bed of Japanese rice with some extra teriyaki sauce drizzled on top, but it’s also good alongside a baked potato with miso butter or in a sandwich with caramelized onions. 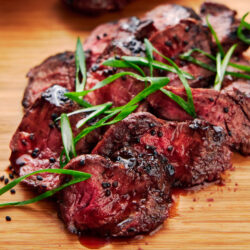