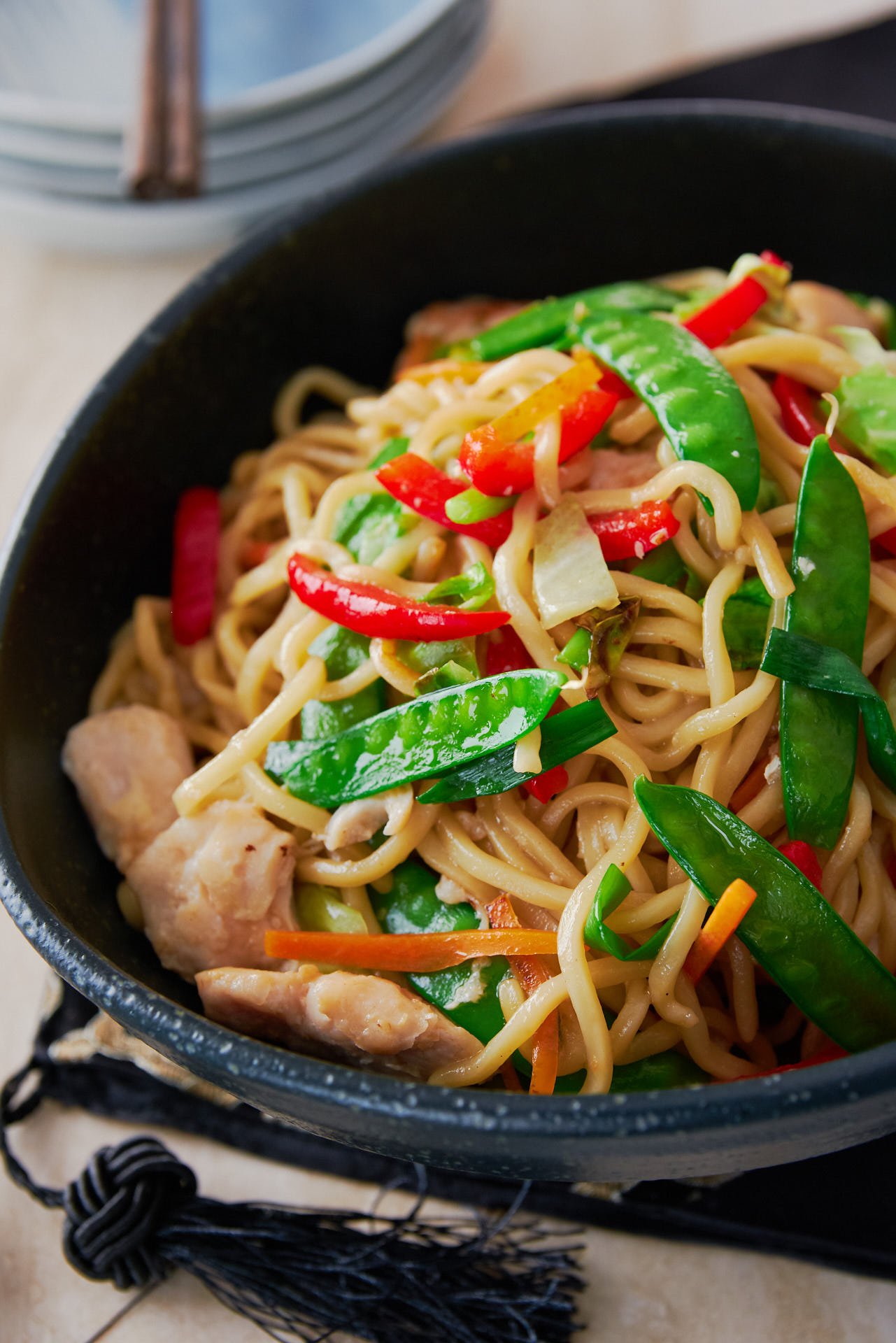 When it comes to carbs, I’m more of a noodle person. Yet despite my love of those lanky strands of deliciousness, Chow Mein has never been a dish that’s drawn my attention. If I’m going to go for noodles for take-out, my order inevitably veers in the direction of Chow Fun or Singapore Noodles. That’s probably because most versions of these stir-fried noodles I’ve had has been bland and soggy with scraps of vegetables and meat, more like an Asian noodle pilaf than a dish that can stand on its own.

Whether you’re dining in a shopping center food court or at a proper restaurant, Chow Mein is often thrown on the plate as a mere afterthought to go with your Orange Chicken and Mongolian Beef. How many people do you know that would order a plate of Chow Mein as their main course for dinner?

The thing is, as a ramen fanatic and lover of stir-fried noodle dishes, I want to love Chow Mein. That’s why I’ve reimagined it as a hearty main loaded with tender chicken, vegetables, and plenty of glorious noodles. But before we get into the techniques, let’s talk about the background of what is perhaps the most famous noodle dish in the world.

What is Chow Mein

Chow Mein (炒面) literally means “fried noodles,” and is usually made with noodles, a protein, and vegetables stir-fried with a sauce. If that sounds vague, it’s because there are dozens of variations of this dish depending on the part of the world in which you happen to live.

The History of Chow Mein

The ambiguous name may be partly responsible for all the variations of this classic street food, but Chow Mein, like many Chinese dishes, worked its way around the world with Chinese laborers. The name is a romanization of the phrase “Fried noodles” in the dialect of the Taishan region of southern Guangdong province. O

Often confused with Cantonese, Taishanese is a distinct dialect that’s found its way around the world. That’s because the Taishan region was a hotbed of emigration from the mid 19th century onwards and an estimated 1.3 million people from the area settled in locations that are quite literally on the other side of the world. These emigrants left home in search of better fortunes, and in doing so brought bits and pieces of their heritage, setting up some of the first Chinatowns around the world.

Much of what we now know as Chinese-American cuisine can trace their roots to these immigrants from Taishan, including Chow Mein. 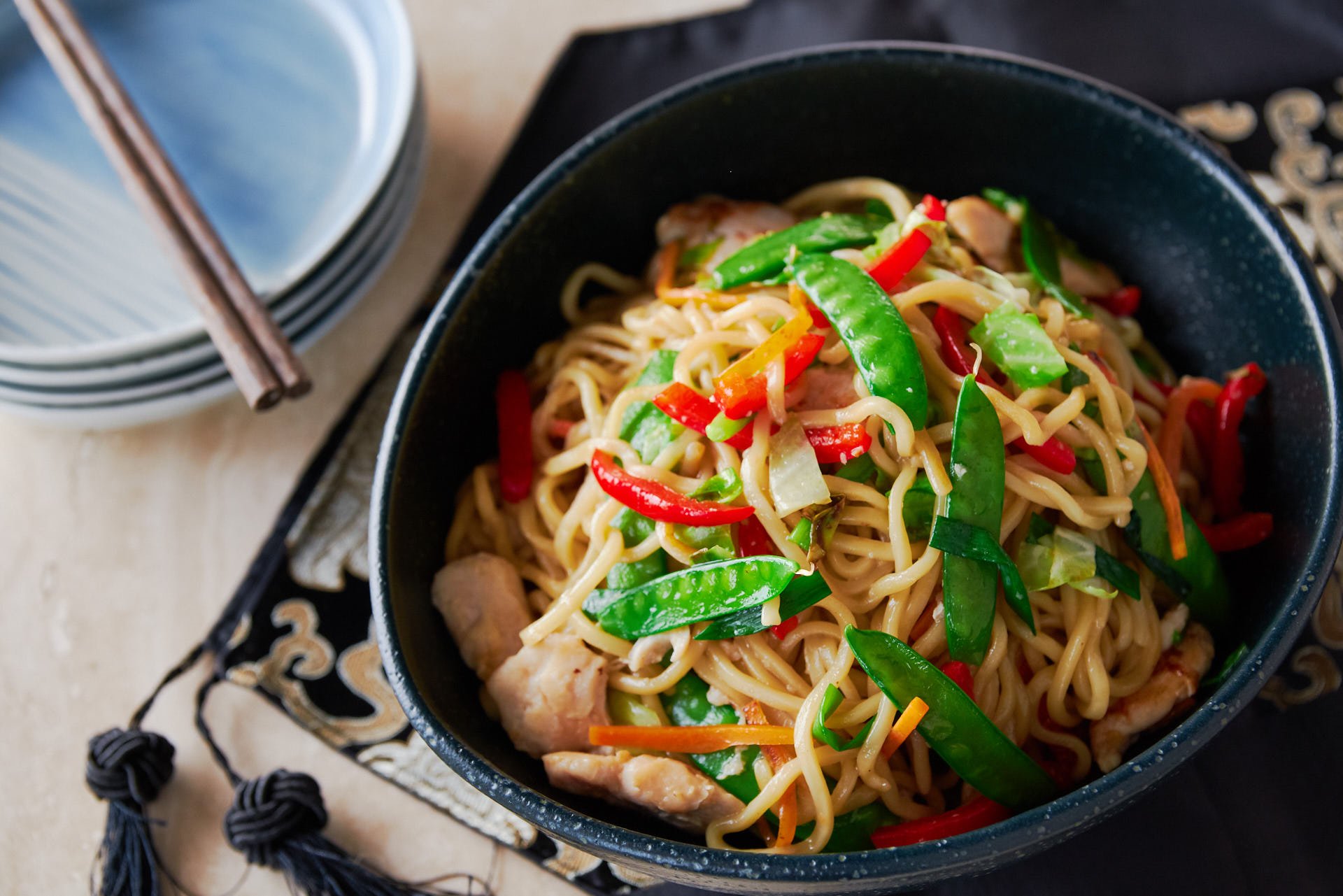 Now that you know a bit about the history of this dish let’s dive into making this dish better. The first thing I did was to tweak the ratio of noodles to stuff. The vegetables get an upgrade from the wilted cabbage and canned bamboo, to a vibrant rainbow of fresh veggies.

I used cabbage, carrots, snow peas bell peppers and scallions for this one, but I’ve used everything from bok choy to zucchini to bean sprouts in the past. The goal is to get a good mix of textures, tastes, and colors, so you can turn this into a fun balanced dish that you don’t have to feel guilty about eating.

I used chicken tenders for my Chow Mein, but chicken breast will work as well. Because these are relatively lean cuts of chicken and are easy to dry out, I highly recommend velveting them first. This classic Chinese technique not only improves the texture of the meat, but it also locks in its juices, preventing your chosen protein from drying out.

The process is simple, you simply add the sliced chicken into a bowl with some salt, egg white, and potato starch and beat the mixture together. When cooked, the starch and albumen gel with the chicken juices, preventing them from evaporating in your pan.

Other forms of protein such as pork, beef, lamb, shrimp or even tofu all work great, and the velveting technique works for all of them.

For the noodles, there are so many Asian noodles that would work for Chow Mein, it’s impossible to list all of them, but you want to look for yellow Asian noodles that are slightly kinky (no, not THAT kind of kinky). Here are some of the names they might go by: “Chinese Egg Noodles,” “Canton Noodles,” “Hong Kong Style Noodles,” “Pan Fry Noodles,” “Lo Mein,” “Chow Mein,” “Ramen,” and “Yakisoba.” They’re all subtly different but will work for this recipe. If they are not pre-cooked, you’ll want to par-boil them for 1 minute less than the time listed on the package; this keeps them from getting soggy when you stir-fry them with the sauce. While fresh noodles will work best, if you do decide to use dry noodles, please be sure to reduce the amount to account for the lighter weight of dried noodles.

After par-boiling, I usually drain and rinse the noodles in cold water to stop carry over cooking. This also washes away any extra starch on the surface of the noodles that might make them stick together in the pan. I also recommend drizzling some oil on them to ensure they don’t stick together while you prepare the other ingredients. 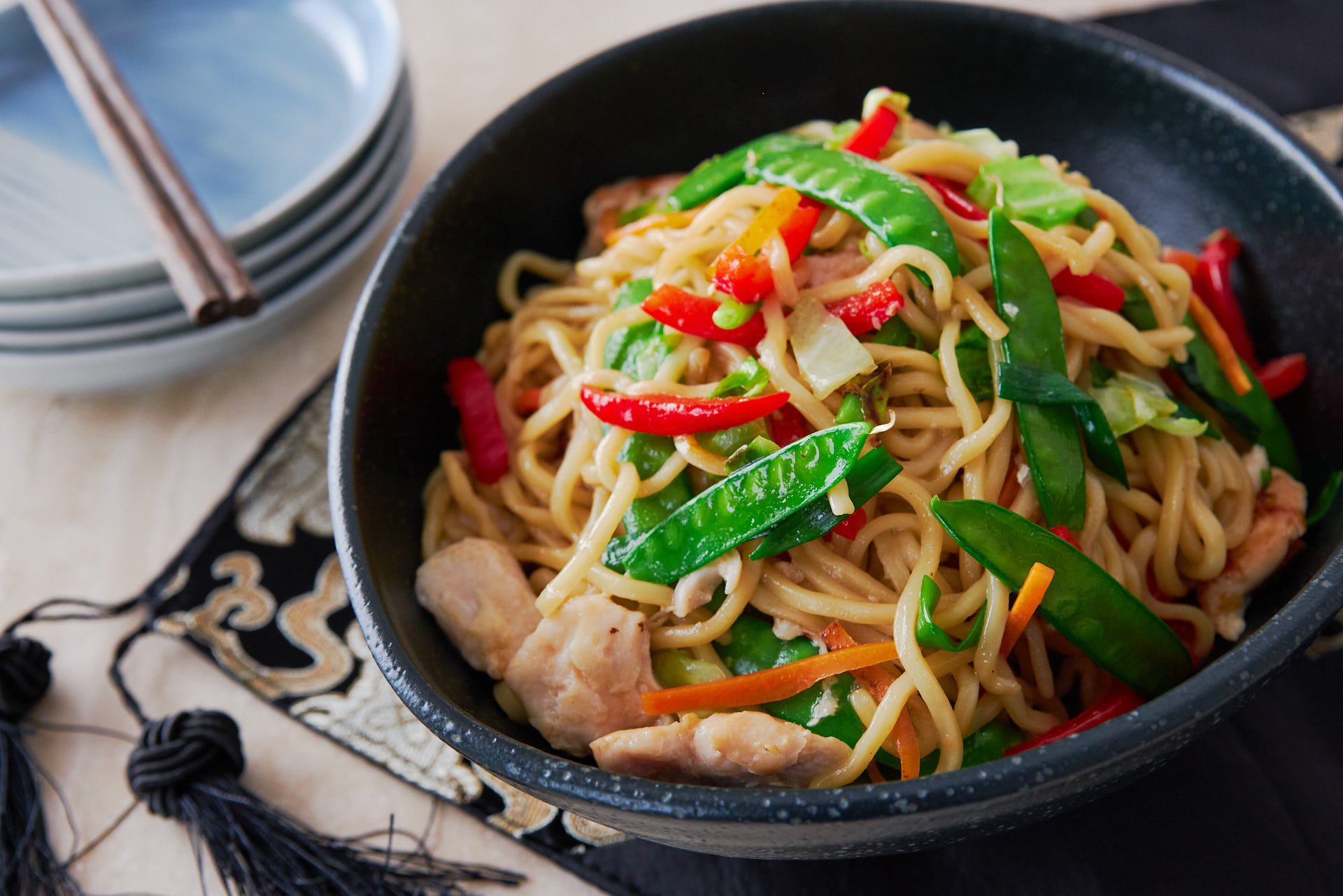 As you might guess from all the variations of Chow Mein, there are literally dozens of ways in which this humble noodle dish gets seasoned. My personal favorite is oyster sauce. This is a delicious savory seasoning with just a hint of balancing sweetness that’s perfect for stir-fries. Using oyster sauce to season your Chow Mein results in noodles that aren’t too dark in color and have a mild taste which is bolstered by the intense umami from the oysters. Ideally, you want to use a sauce that actually has oysters in it (as opposed to artificial flavors and MSG), and my favorite brand is called MegaChef.

Other than the oyster sauce I use some chicken stock and a pinch of white pepper to give it a little kick. The rest of the flavor comes from caramelized ginger and garlic along with all the chicken and vegetables that are stir-fried together with the noodles.

If you like your chow mein served with gravy, check out my Chicken Chop Suey recipe.

Do I Need a Wok to Make Chow Mein?

I’m guessing a lot of you are asking this question, and while purists will tell you it’s a must, in most cases I’d disagree. Let’s start off by examining the merits of a wok. A wok’s curved bottom allows the flames from a high BTU burner(like the ones they use in Asia) to crawl all the way up the sides. This gives you a lot of hot surface area to work with. The second benefit is that traditional woks are made of steel, which is good at retaining heat. This means the pan doesn’t cool off when you start adding ingredients to it. Finally, woks are usually seasoned with a layer of polymerized oil, which acts as a non-stick coating.

If you don’t have a gas burner, or it isn’t powerful enough to creep up the sides of your wok, the first two benefits are nullified, and the shape can actually be a handicap in these situations. As for the third benefit it can be achieved with other non-stick surfaces. The majority of western-style burners just don’t put out enough BTU to make full use of a wok’s surface area. That’s why I usually recommend people use a western-style frying pan.

The trick is to keep your frying pan very hot throughout the cooking process (the sizzling sound should never stop). If you have a high BTU cooktop, this is easy to do by turning the heat up. If you have a low output stove, the best thing you can do is to use a large well-seasoned cast iron pan. A large pan gives you lots of surface area to work with, and a dense material such as iron retains heat much better. 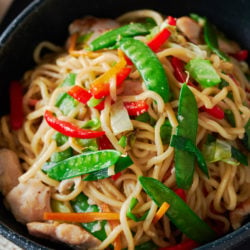