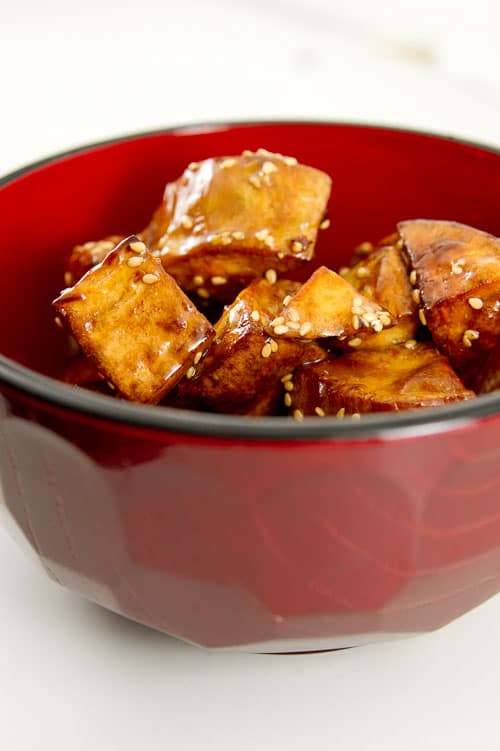 Aside from learning new things, another reason why I love traveling is because it reinforces and reminds me of the things I already know. Take these Daigaku Imo for example. They’re made with no more than three ingredients, and yet there’s something magical about devouring a paper cone filled with these simple sweet morsels on a crisp autumn day.

Made with freshly harvested fall sweet potatoes, Daigaku Imo (大学芋), or “university potatoes”, takes on a crunchy outer shell, which harbors a pillowy, almost creamy interior. Each piece is glazed in a sweet syrup that gives it a glossy sheen, and a sprinkle of toasty sesame seeds finishes it off. If you’re wondering what sweet potatoes have to do with higher-learning institutions, these were a popular snack in universities during the earlier part of the last century, hence the name. It makes sense too, what college student wouldn’t want a tasty snack, packed with enough calories to get them through an all-nighter.

I came across this lovely specimen after an afternoon spent wandering through Kappabashi, Tokyo’s kitchenware district. They came from a little stand near Sensoji Temple with a line going around the block.

For my version I used honey out of convenience, but as it turns out, it also makes a wonderful flavor compliment to the nutty sweet potatoes and sesame. I also added some sesame oil to the frying oil to give it just a bit more toasted sesame umph. 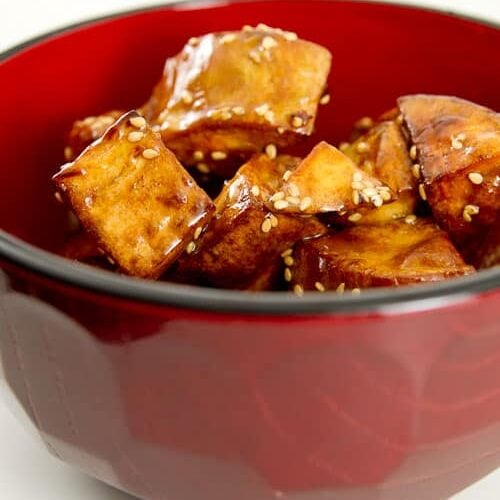 Note: While you normally don't add things to the oil when it's cold, these big pieces of potato need some time at a lower temperature so they cook all the way through. Since potatoes aren't very porous, they don't have the problem of absorbing too much oil you would have if you were to do the same thing with something breaded for instance.
Course Dessert, Snacks
Cuisine Japanese
Diet Dairy-Free, Gluten-Free, Pescatarian, Vegetarian

What do you think?24 Cancel reply