Regardless of where you live, you’ve probably heard of Demon Slayer: Kimetsu no Yaiba (鬼滅の刃). It’s a Japanese manga turned anime series that has become one of the highest-grossing media franchises of all time, ahead of Pirates of the Caribbean and slightly behind Sesame Street. In case you haven’t seen it, I won’t spoil the story, but this beef bento box plays an important role in the Mugen Train story arc. In Season 2 of the animated series, we discover how demon slayer Kyojuro Rengoku winds up with stacks of these tasty bento’s.

Demon Slayer is set in a fantasy world where demons feed on humans, and a secret society protects humanity from these supernatural threats. But the tale takes place during the Taisho-era in Japan, and there’s a lot of Japan’s cultural history woven into the storylines.

Gyunabe, which literally means “beef hotpot” in Japanese, was one of the first ways beef was consumed in Japan after the 1200 year ban on eating meat was lifted in the latter half of the 19th century. It evolved into dishes like Gyudon and Kanto-style Sukiyaki, but it may have also been used in bento like the ones Rengoku scarfs down.

To make the Gyunabe, preheat a frying pan over medium-high heat until hot. Add the oil and swirl it around the pan before adding the tofu and Negi. Be careful as the hot oil will spatter when you add the tofu. The goal is to brown the tofu and lightly char the Negi. This took me about two minutes.

Flip the tofu and Negi over and push them to one side of the pan. Add the onions, sake, mirin, soy sauce, and sugar, and reduce the heat to maintain a simmer. Cook the ingredients together, flipping them over periodically until the tofu is well seasoned and the onions are tender. This should take about six minutes.

Add the thinly sliced beef on top of the onions, and then swish it around in the liquid until it’s no longer pink. Provided the meat is sliced thinly enough, this should only take about a minute. Don’t overcook the beef, or it will get tough.

To pack the bento add a serving of rice to the bottom of two bento boxes. Then you want to split the beef and onions onto the right two-thirds of the boxes.

Layer the benishōga, tofu, and Negi over the remaining third of the rice and then finish each Demon Slayer bento with one half of the soft-boiled egg.

Is Gyunabe Bento a real dish?

Gyunabe(牛鍋), which means “beef hotpot,” was one of the first ways beef was prepared in Japan. It is unclear whether it was used as a topping for bentos, but it is plausible that ekiben vendors were selling the dish in a portable fashion, as depicted in Demon Slayer.

Ekiben, which means “train station bento,” is a class of Japanese bentos prepared and sold by vendors near train stations in Japan. In the early days of train travel, the journeys were often long, and ekiben were portable meals that could be purchased and taken on the train to eat during the trip. These days, it’s become a way to explore the culinary culture of each area in Japan, with even the most obscure rural stations having a local specialty packed into their ekiben.

How do you pronounce Gyunabe?

Gyunabe is a three-syllable word that’s pronounced as follows:

Should this Gyunabe Bento be reheated?

In Japan, bentos are usually eaten at room temperature, but you can certainly reheat it as long as you pack the bento in a microwave-safe container. 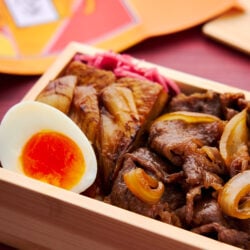