Although it has a Western-sounding name, Chaliapin Steak was created in Tokyo about 85 years ago. Since then, it’s become an overlooked staple of yōshoku (Western cuisine) in Japan. Recently, it’s come back into the spotlight thanks to a few episodes of Food Wars (食劇のソーマ Shokugeki No Soma), which prominently features it in an epic rice bowl battle between two chefs.

In episode 6 of season 1, the usually confident protagonist, Yukuhira Soma, hits the chef’s equivalent to writer’s block as he plans a dish for his first food battle. Inspired by some words of encouragement from a classmate, Soma starts to lay out the dish. In the next episode, he makes and presents his version of Chaliapin Steak in donburi form, and it’s a hit with the judges.

It’s entertaining, and some of the ideas introduced are brilliant, but if you tried to make a Chaliapin Steak Don in real life as presented on the show, it wouldn’t turn out the same way. I’ve gotten a lot of requests from supporters to do my take on some of the dishes featured in Food Wars, and this has been one of the most frequent requests.

How to Make Chaliapin Steak

To prepare the steak, you first want to mechanically tenderize it by cutting shallow slits into it at a 45-degree angle about a quarter-inch apart and about a third of the thickness of the steak deep. Then you can flip the steak over and repeat the same process at the same angle. This ensures the slits run perpendicular to each other on each side, so you don’t risk cutting all the way through the steak.

Mix the chopped onions with salt and then surround the top and bottom of the steak with the onions. Cover the container up and refrigerate it overnight to let the onion enzymes do their thing,

The next day, scrape off all of the onions from the steak and then season both sides of the meat with black pepper.

Heat a frying pan over medium-high heat until very hot, and then add the vegetable oil and steak. Let the steak form a nice brown crust on one side, and then flip it over and brown the other side. Depending on how thick your steak is, you may need to turn down the heat and flip the steak a few more times to cook it through to your desired doneness. A rare steak will have an internal temperature of 120-130 degrees F, a medium-rare steak will be 130-140 degrees F, and it goes up in 10-degree increments until you reach well done at 160 degrees F.

When the steak is done, transfer it to a plate and let it rest.

To prepare the sauce, turn down the heat and add the onions to the pan you cooked the steak in. Saute the onions until they’re tender but still retain their shape. This took me about six minutes.

Deglaze the pan with the red wine and let the mixture boil until the amount of liquid has reduced by about half.

Finish the sauce by vigorously whisking in the cold butter until the sauce is thick and creamy. Don’t overcook the sauce at this point, or the fat will separate out and make the onions greasy.

After the steak has had a chance to rest, slice it up as thinly as possible by holding the knife at a 45-degree angle to the cutting board.

How to Make Ume Rice

To make the ume rice, you first need to remove the pits from the umeboshi and then mince them into a paste.

Then you can fold the ume paste into the freshly cooked rice until it is evenly distributed.

To assemble the donburi, fill two rice bowls with the ume rice and then top each with half of the sliced steak. Next, split the onion sauce between the two bowls and then finish with a sprinkle of chopped scallions.

Chaliapin Steak was invented by Tsutsui Fukuo in 1936. He was the head chef at New Grill in the Imperial Hotel when Russian opera singer Feodor Chaliapin came in requesting a soft steak. Utilizing mechanical and enzymatic tenderization techniques, Chef Tsutsui created a dish that was an instant hit and named it after his famous guest. Although Chaliapin Steak has become a staple of Western-style yōshoku cuisine in Japan, it wasn’t very well known abroad until it was featured in a few episodes of Food Wars.

What is Chaliapin Steak Don?

“Don” is an abbreviation for donburi, which refers to a large rice bowl in Japanese. It’s also the name given to a class of dishes with a savory topping served over a large bowl of rice. Chaliapin Steak Don is a modern preparation of the classic Japanese steak popularized by the anime series Food Wars. Yukihira Soma’s version from the show is made by marinating steak with onions to tenderize it. The steak is then pan-fried, and the onions get cooked in the same pan after the steak is done. He then makes a sauce using soy sauce and red wine before serving the steak and onions over a bed of ume rice.

How do you pronounce Chaliapin Steak Don?

Chaliapin Steak Don is an 8 syllable phrase that is pronounced as follows in Japanese:

sha like shark
ri the “ri” sound does not exist in the English language, and the best way to make it is to say the word “ream” with the tip of your tongue at the front of your mouth.
a like aardvark
pin like penal
su like soup
te- like ten with an elongated ‘e’
ki like key
don like donut 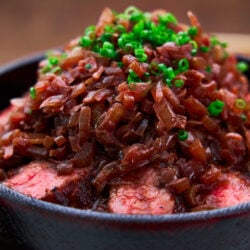