I know this recipe has been long overdue. After Kani Salad and Seaweed Salad, Wafu Dressing (lit. “Japanese-style dressing”) might be my most requested pseudo-Japanese recipe.

“Pseudo-Japanese?” you say? While we have salads in Japan, and even sesame dressing, but it’s not quite the same as the Wafu Dressing found in Japanese restaurants across the US. Aside from being less sweet, the sesame dressing in Japan also tends to be less rich because it’s made with coarsely ground toasted sesame seeds instead of neri-goma (練り胡麻), which is a pureed sesame paste.

Regardless of which you use, it’s this sesame paste that give Wafu Dressing its creamy texture and nutty taste. I’ve served this with a simple salad with iceberg lettuce, tomatoes, carrots, cucumbers and kaiware sprouts, but this dressing works on just about any salad. Try tossing it with some soba noodles and veggies for a noodle salad, or mixing it into boiled potatoes to make a sesame potato salad. 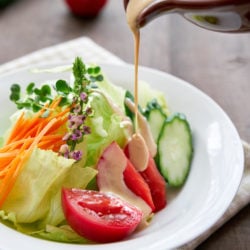