Zaru Soba is a chilled noodle dish made by boiling and chilling buckwheat noodles before serving them on a Zaru or strainer. The soba noodles are then dipped in a savory dashi-based broth as you lift each bite of noodles to your mouth. It’s a wonderfully refreshing meal that requires minimal cooking, and it can be customized with a wide variety of condiments that can be added to the sauce or used to top the noodles with.

The word Soba (蕎麦) literally means “buckwheat” in Japanese, and it’s also the name by which noodles made from buckwheat are known. It’s a little confusing, though, because historically, any thin noodle was known as “soba.” This is why you hear names such as yakisoba, chuuka soba, and sōki soba, even though these are made with wheat-based noodles.

Buckwheat does not contain gluten, so turning it into a dough that you can roll out and cut into noodles is challenging. This is why most modern soba is made with a mixture of wheat flour and buckwheat flour, which is a style known as Nihachi Soba (二八蕎麦). The name literally means “two-eight soba” because it was originally made with a ratio of two parts wheat flour to eight parts buckwheat flour. If you want a noodle that is made from 100% buckwheat, look for Jūwari Soba (十割蕎麦), which literally means “100% soba”.

Soba can also come in flavored varieties with ingredients such as green tea, mugwort, or seaweed added to the dough, infusing the noodles with both color and flavor.

Soba comes either fresh or dried. Like pasta, the fresh variety is usually better, but dried soba is still delicious if you cannot find it fresh. The boiling times for soba depend on its composition and thickness, so be sure to read the instructions on the packaging to determine the boiling time. If the instructions aren’t translated, look for the character “分”; this means “minute,” and it’s usually preceded by a number which is the boiling time. Some packages will have two sets of boiling instructions, one for making cold soba and one for making hot soba. The times will differ slightly because you want to slightly under boil the soba for hot preparations, so they don’t get soggy in the soup, while they need to be fully cooked when they’re being served chilled.

The condiments you serve with Zaru Soba are where you can get creative, and there are many options here.

How to Make Cold Soba

The first thing you want to do is to make the tsuyu by adding the dashi, soy sauce, sake, and sugar to a saucepan and bringing it to a boil. You want to boil this for about a minute or until it no longer smells like alcohol. Set the dipping sauce aside to cool. You can also put the saucepan in a bowl of ice water to chill it rapidly.

While you wait for the broth to cool, prepare all of the condiments you plan to serve with your Zaru Soba.

Bring a large pot of water to a full boil. Soba noodles already contain salt, so you do not need to salt the water. Add the noodles and stir them for a minute so that they don’t stick together. Boil the noodles for the time specified on the packaging.

When the noodles are done, use tongs or chopsticks to transfer them to a strainer. Keep the boiling water for later.

Rinse the noodles under cold running water to bring them down to room temperature, and once they’ve cooled a bit, use your hand to agitate the noodles to remove any excess starch on the surface of the soba.

Prepare a bowl of ice water and add the noodles to chill them.

Plate the noodles directly from the water bath by scooping small handfuls of soba and placing them in mounds on a zaru. If you don’t have a zaru, you can use a shallow basket or anything that will allow the excess water to drain off.

The noodles will start to stick together after a few minutes, so serve them immediately with the dipping sauce and condiments.

When you’re done eating the cold soba, you can reheat the boiling liquid and add it to any remaining dipping sauce you have to make a soothing soup to finish off the meal.

What is Zaru Soba?

A zaru (笊) is a strainer that was traditionally made from woven bamboo. Since cold soba is usually served on a zaru, this is where it gets its name.

How do you pronounce Zaru Soba?

Zaru Soba is a four-syllable name that is pronounced as follows:

za like zombie
ru like the “ru” sound does not exist in the English language and the best way to make it is to say the word “ruse” with the tip of your tongue at the front of your mouth.
so like sore
ba like barb

How do you eat Zaru Soba?

Zaru Soba is eaten by picking up a few strands of soba noodles using chopsticks and then dipping them into a dashi-based dipping sauce. You can adjust the saltiness of the bite of noodles by how far you dip the noodles into the cup of sauce, so I usually start off by only partially dipping them in the sauce. Then as the dipping sauce gets a little watered down, you can submerge them more fully in the tsuyu. Various condiments, such as scallions and wasabi, can be added to the dipping sauce to change the flavor and texture as you eat the noodles, which helps keep the meal interesting.

Why do Japanese people slurp noodles?

As with any Japanese-style noodle, it is perfectly acceptable to slurp soba noodles. This not only helps you get them into your mouth, but it also aerosolizes some of the aromatic compounds, allowing you to enjoy the fragrance of the noodles and dipping sauce in the same way you would enjoy fine wine.

Sobayu (蕎麦湯) literally means “soba boiling liquid,” and it’s the hot water the soba noodles were boiled in. It is typically served in a teapot at the end of a soba meal, and it can be drunk as is like tea, or it can be added to the remaining dipping sauce to make a comforting soup to finish off your meal.

Soba noodles are typically plant-based, however, the dipping sauce includes dashi stock, and if the dashi has fish, it would not be plant-based. That being said, it is very easy to make vegan-friendly dashi stock by soaking dried shiitake mushrooms and konbu in water overnight.

What can I serve with Zaru Soba?

Zaru Soba is a stand-alone meal; however, it is common to serve it with tempura or kakiage if you want to add a little more variety. 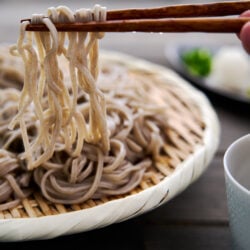