Often found as part of a meze, Muhammara (Moo-hum-mara) originated in Aleppo, Syria, which is known for its wondrous red chili peppers. Like most dishes that have been around since before the reign of cookbooks and measuring cups, Muhammara is made in about as many ways as there are cooks who make it. Most recipes use a base of breadcrumbs and walnuts, but some versions use bulgur, while others omit the breadcrumbs and rely solely on walnuts.

Having come from a town with a pepper named after it, it’s no surprise that the key ingredient in Muhammara is chili peppers. Both fiery and fruity, Aleppo Peppers come in at around 6,000-15,000 Scoville Heat Units putting them above Hungarian hot paprika (100-500 SHU), but below Cayenne (35,000-55,000SHU) in terms of spiciness. Some preparations call for fresh Aleppo peppers, while others use the peppers dried and ground into a powder, still others call for the peppers to be roasted.

I learned how to make Muhammara from a Syrian chef that kept a large glass mason jar full of chili paste made from Aleppo peppers. In his version, the fiery chili paste is added by the spoonful, which not only brings the heat, it adds a wonderful earthy flavor that’s brimming with umami.

The chili paste is made by lightly withering the peppers under the sun before mincing them and throwing them into a jar along with salt and a little olive oil. The jars are then left out in the sun to ferment, which is why the paste is so flavorful. The process is not unlike the process used to make Asian chili pastes such as sambal oelek (which contains a little vinegar) and doubanjiang (which contains fermented fava beans). That’s why these make pretty good substitutes if you’re not able to find the Syrian version near you.

For my take on Muhammara, I like to add both chili paste and fresh peppers. The fresh peppers lends a sweet fruity flavor, while the chili paste adds heat and depth. By soaking the breadcrumbs in the olive oil and tahini overnight, they fully absorb the oil, giving the spread a creamier texture while allowing the crumbs to retain a better texture. For the walnuts, I like roasting them first to bring out their full flavor, and then I grind them down to about the same texture as the breadcrumbs. If you want your Muhammara more chunky you can just chop them by hand.

Finally, the pomegranate molasses brings both tartness and sweetness to the party, which is all rounded out by a bit of tomato paste to help pull everything together. When all is said and done, you have a spread that’s delicious slathered on bread and in sandwiches, but also makes for a delightful dip to go along with a platter of vegetables such as peppers, sweet onions and cucumbers. 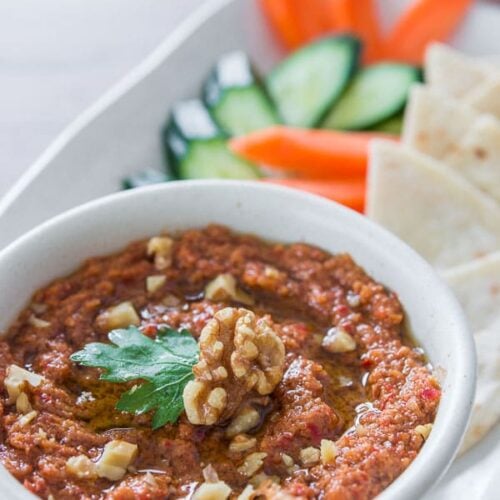