Nikuman (肉まん), also known as Bāozi in China, are the Asian equivalent to sandwiches in the West. With a savory meat and vegetable filling wrapped in dough and steamed, they make a complete meal that can be eaten on the go without utensils.

While convenient, I’ve always been a little wary of the mystery-meat filled bun you can buy at the store. They taste good, but the bleached white dough is often too sweet, the skimpy filling a little prepubescent, and the unidentifiable meat inexplicably pink.

On a recent trip to Kyoto, I made the mistake of boarding a noon train without buying lunch. By the time the bullet train reached Kyoto station I was ready to start gnawing on the seat in front of me. It didn’t help that the guy sitting next to me had brought on a bento box and a tallboy of beer.

As I entered the station from the platform, the sweet smell of pork perfumed the air. Led by my nose like a bloodhound, I soon found myself standing in front of a stalled called Horai 551, in line with a bunch of other hungry travelers.

I don’t know if it was my hunger or Horai 551’s recipe, but it was the best nikuman I’d ever had. With a relatively thin bun and incredibly soft and juicy filling redolent of onions, I ended up back in line for a second bun.

I’ve been trying to recreate Horai 551’s nikuman since that trip, getting closer with each batch. Today’s batch not only met my expectations, I dare say it was better than Horai’s. The filling is moist and tender with loads of umami coming from the meat, mushrooms and onions. The fluffy, mildy sweet bun is a wonderful contrast to the dense savory filling.

The trick is to use a mixture of ground pork and sliced pork belly, the extra fat ensures that your filling is juicy. The trouble is, too much juice, and your bun gets soggy. That’s where the cornstarch and egg white comes in. They not only act as a tenderizer, they also help bind the juices to the meat so they don’t absorb into the bun.

This recipe makes 8 large meal-sized buns, but you can just divide everything into 16 segments to make appetizer sized buns that are perfect for bringing to potlucks.

They’re best straight out of the steamer, but they do take a bit of time to make, so I like to make a large batch and freeze them. Nikuman keeps for about a month in the freezer. To bring them back to life, just wrap them in a damp paper towel and microwave for a few minutes. 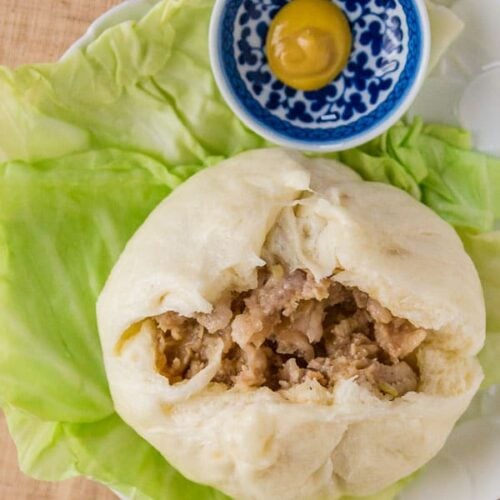 What do you think?138 Cancel reply