Shumai are a Cantonese dim sum dish that made their way over to Japan over a hundred and twenty years ago. It’s since become one of the most beloved dumplings in Japan, eclipsed only by gyoza.

Although there are many different styles of these steamed dumplings today, my Shumai recipe uses hand-chopped shrimp, pork, and cuttlefish to make these succulent shrimp and pork dumplings. The resulting Japanese-style Shumai is chock full of contrasting textures and tastes with a reservoir of juices that burst out of each dumpling with every bite.

How to Make Shumai

The first thing you need to do is chop up the seafood. For the shrimp, I like to chop up a third of it into chunks about the size of a peanut M&M. Then I mince up the rest into a chunky paste.

For the cuttlefish, clean it and then peel off any skin or membranes attached to the surface. Cut it into thin strips and then chop the strips up. Then you want to mince it up with a knife until you have a rough paste that’s about the same texture as the shrimp paste.

Add all of these ingredients to a large bowl along with the scallions, egg white, potato starch, oyster sauce, ginger juice, Shaoxing wine, toasted sesame oil, soy sauce, and white pepper. Use your hand in a whipping motion to mix everything together until the mixture has a slightly frothy consistency. Cover and refrigerate overnight. This helps firm up the filling so it’s easier to handle, but it also allows all the seasonings to marinate with the ingredients.

To make the Shumai, you’ll need a steamer. I like using a bamboo steamer for these, but you can use a steamer basket or even improvise one by setting a round wire cooling rack over a few wadded-up balls of aluminum foil. Next, add some water to the pot for your steamer and bring it to a boil.

Line the steamer rack with lettuce leaves. You want it to be flat, so remove the thicker stems and overlap the leaves slightly, so the bottom of the rack is fully covered. The lettuce acts as natural parchment paper, keeping the dumplings from sticking, and you can also eat the lettuce once the Shumai are steamed.

To wrap the Shumai, make a hollowed-out fist with your non-dominant hand, and place a wrapper centered on the opening. Next, use a spoon to scoop a generous tablespoonful of filling into the center of the wrapper and use the bottom of the spoon to press it into the wrapper. This should force the wrapper down into the hole you’ve created with your hand, and the sides of the wrapper should form pleats around the edge of the Shumai.

Once you’ve filled the wrapper, turn the dumpling a few times in your hand, flattening off the bottom while setting the pleats. Place the Shumai onto the lettuce-lined rack and repeat the process until the steamer is full. Be sure to leave room around each dumpling because they will expand a bit while cooking.

When your steamer is full, cover it with a lid and set it on your pot of boiling water. If you’re using a basket type of steamer, just lower the basket into the pot of boiling water and then cover the pot with a lid. Let you Shumai steam for 7-8 minutes, adjusting the temperature up or down to maintain a gentle stream of steam escaping from the lid.

Shumai is best when it’s still hot so serve them right away.

Shumai (焼売) is the Japanese version of a Chinese steamed dumpling called Siu Mai (烧卖 – also sometimes spelled Shaomai or Sio Mai). Shumai is believed to have been introduced to Japan in the late 19th century, around the same time early versions of ramen began to spread around the country.

In 1908, a bento shop called Kiyoken opened its doors in Yokohama Station, selling a Shumai Ekiben. By the 1960’s Shumai had gone mainstream and was included in school lunches around Japan. These days Shumai comes in a variety of preparations, including a deep-fried version called agé-shumai (揚げ焼売), one that’s topped (or even wrapped) with threads of squid called ika-shumai (いかしゅうまい), and Ashikaga Shumai that’s made with onions and potato starch (足利シュウマイ).

How do you pronounce Shumai?

Shumai is a 2-syllable name pronounced as follows (read the italicized parts).

Can Wonton or Gyoza wrappers be used for Shumai?

Shumai wrappers tend to be smaller and thinner than wonton and gyoza wrappers, but they should work. The wrappers I used were 2.75-inches square (7cm). If you use larger wrappers, you’ll need to add more filling to each dumpling (so the recipe will make less Shumai), and you’ll also need to increase the steaming time to ensure they are cooked through. I recommend avoiding thicker potsticker wrappers that are any thicker than a credit card.

What condiments do I serve with Shumai?

In Japan, Shumai is often served with hot mustard and rice vinegar, but I like serving these seafood dumplings with a sauce made from black vinegar with a little soy sauce and fresh ginger that’s been sliced into thin threads. 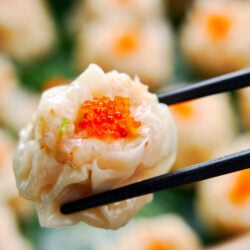