Parmesan cheese is one of those condiments that’s able to make almost anything it’s sprinkled on taste better. That’s because it’s loaded with fat, salt, and amino acids that get friendly with the taste buds in your mouth.

To create a plant-based substitute, I set out to find a set of ingredients that could recreate the right texture, mouthfeel, taste, and aroma. The result is a delicious sprinkle that’s good on everything from pastas to salads, to popcorn. It can also be used in sauces and soups to add richness and umami instantly.

What are the ingredients for plant-based Parmesan?

How to Make Vegan Parmesan “Cheese”

You can make this in a spice grinder, blender, or food processor. The first thing I do is grind the dried shiitakes, along with the nutritional yeast and salt, until they form a fine powder.

Then I grind the walnuts, by pulsing them a few times. You really need to be careful here as walnuts have a ton of oil and they will quickly go from being crumbly to a paste, and then to walnut butter. You can make this a little easier by freezing them first.

Then I grind the cashews separately as these will turn to butter as well if over ground, but they are harder than walnuts and require a few more pulses to get crumbly.

What you can use this on 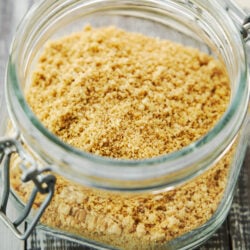