Although there are many regional variations around Japan, the most popular version of Chicken Katsudon (チキンカツ丼) is made with a bed of rice topped with cutlets of chicken that have been simmered in a savory-sweet broth with onions and egg. It’s a great way to use leftover cutlets, which makes it a popular lunch item in homes and cafeterias around Japan.

How to make Chicken Katsudon

If you are using leftover chicken katsu, you can skip ahead a few steps, but Katsudon turns out best if you fry the katsu at a higher temperature than you usually would if you were eating the katsu by itself. You can follow the directions in my Chicken Katsu recipe or Tonkatsu recipe to learn how to prepare and bread your cutlet and then follow these instructions to fry it.

Fry the cutlet for 4-5 minutes, or until they are medium brown on the outside. Be sure to flip it over at least once to ensure it browns evenly. It’s okay if the meat is slightly undercooked as it will be cooked again in the broth. When it’s done, drain it on the prepared rack and let it cool enough to handle.

Slice the katsu into relatively thick slices as you will need to flip these over individually while cooking.

Briefly beat the egg. You still want a clear separation between the egg whites and yolks, as this creates a marbling effect in the finished donburi.

Slice the onions relatively thinly and drop them into a non-stick 8-inch omelet pan along with the dashi, sake, soy sauce, and sugar. Bring this mixture to a simmer over medium heat and adjust the temperature to maintain the simmer. You don’t want the heat to be too high, or all of your sauce will evaporate.

When your onions are tender, add the sliced cutlet and nestle the pieces between the onions. Let this cook until the bottom of the katsu has absorbed some of the broth.

Flip the chicken over and then continue cooking it in the broth until the chicken is warmed through and fully cooked.

Drizzle the egg mixture evenly over everything. Use chopsticks or tongs to move the chicken and onions around a bit to redistribute the egg and mix it with the remaining broth.

Slam the pan against the stove to settle the egg. If you have a fragile cooktop, such as an induction burner, you’ll want to do this on a separate surface that won’t break.

In a large bowl that’s about the width of your pan, add enough rice to fill it about halfway. Shake the pan to loosen the egg from the pan and slide it over the rice. You can use a spatula to help if you need it.

Garnish the rice bowl with mitsuba or chopped scallions and serve immediately.

Donburi (丼) is a type of large ceramic bowl usually used to serve rice or noodles. It is also the name for a rice dish served in the eponymous bowl with seasoned meat, seafood, and or egg on top. When used to refer to the dish, it is often abbreviated as just don.

What does Katsudon mean?

Katsudon is an abbreviation of katsuretsu donburi which literally means “cutlet rice bowl”. However, katsu (カツ) sounds like the verb katsu (勝つ), which means “to win.” That’s why it’s often eaten before or after a big challenge in life, such as an exam, or match. For example, in the original version of Midnight Diner (yes, the US is missing out on a few seasons of the series) season 1, episode 6 features a boxer who stops by the diner after a win to eat Katsudon.

Katsudon was originally just Tonkatsu dipped in Sauce and served over a bowl of rice. How this became the simmered dish that it is today is not clear. One creation story suggests it was invented in 1921 near Waseda University at a soba restaurant called Sanchoan. In the evenings, the restaurant became an izakaya that served Tonkatsu. Because the cutlets weren’t fried to order, there would inevitably be leftovers. One morning the chef was bemoaning a particularly large batch of uneaten Tonkatsu when a college student suggested he’d eat it if the chef prepared it with egg and served it over rice like Oyakodon.

How many servings does this make?

This recipe makes 1 very large serving of Katsudon. If you are a lighter eater, you can split this between two people.

Can I double this recipe?

Yes, you can, but I recommend cooking it in two separate small pans, as it will not look very nice if you try and split a large batch of Katsudon in half between two bowls.

Can I use leftover katsu to make Katsudon?

It’s best to fry the cutlet at a higher temperature for Katsudon so that the meat is slightly undercooked while the breading is extra browned; however, leftover fully cooked chicken or Tonkatsu will work fine.

Is Katsudon good for bento?

Katsudon makes for a delicious bento lunch; however, you will want to fully cook the egg if you plan to pack this into a bento box, especially if you don’t intend to refrigerate and reheat it before eating it. 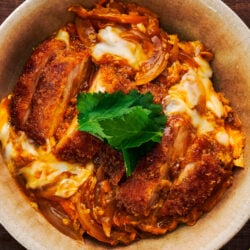