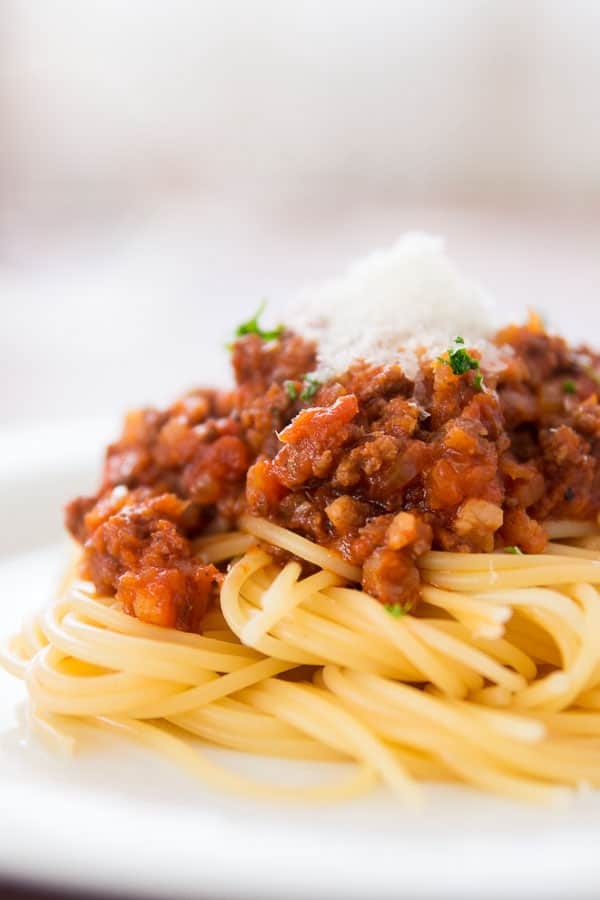 The secret to making a great spaghetti and meat sauce is to build layers of flavor (beyond the meat and tomatoes) and to allow them to meld together in a balanced way. As I’ve shown you in the past with my classic Ragù Alla Bolognese, this is a reasonably straightforward task when you include dozens of ingredients and simmer them together for hours. Doing this in minutes from less than a dozen ingredients presents a more significant challenge.

By using a few flavor-enhancing time-saving techniques, this spaghetti sauce takes less than thirty minutes from start to finish without skimping on flavor. What you get is a well-balanced pasta sauce that’s neither too tart nor too sweet, with a complex savory flavor that belies the quick preparation. If you’re new to the kitchen, bookmark this page, because I’m going to show you some techniques that can be applied to almost any dish to speed it up while making it taste better.

Unlike what most jarred sauce manufacturers would have you believe, this dish is called spaghetti and MEAT sauce, not “spaghetti with tomatoes and a few crumbs of meat.” That’s why I add about as much meat into the sauce as there is tomato so that you’re never left wondering “Where’s the beef?”

To create the meaty foundation for the sauce, I use two kinds of meat: bacon and beef. By browning them both, we take advantage of the Maillard reaction, creating new flavor compounds that give the dish depth. If you don’t eat pork, you can just increase the amount of ground beef by 100 grams, and then add a few salted anchovy fillets to make up for the flavor you lose by leaving out the bacon.

The next layer of flavor comes from a mirepoix of onions, garlic, and carrots that you caramelize in the rendered fat from the meat. This not only brings out the natural sweetness of the aromatics, but it also creates a host of additional flavor compounds that make the sauce taste far more complicated than it is. It’s important to chop the onions small and grate the carrot finely, as this not only speeds up the caramelization process, it hastens the release of the flavors into the sauce once you add the liquids.

For the next layer of flavor, I added some white wine. The wine not only introduces fruit flavors, the liquid helps release the brown fond (caramelized meat and vegetable flavor) that forms on the bottom of the pan. By boiling the mixture until there’s almost no liquid remaining, you ensure that all the alcohol has evaporated, leaving a wonderful blend of meat, vegetable and fruit flavors behind.

Since tomatoes used for canning are often picked before they’re fully ripe, they tend to lack the sweetness of fresh vine-ripened tomatoes. Adding a little ketchup to the sauce is a quick way to bolster the tomato flavor while balancing the acidity of the canned tomatoes with a hint of sweetness.

Left to stew together while the pasta is boiling, you’ll have a delicious homemade spaghetti sauce in less time than it would have taken to order take-out. It’s not just about saving time though; with a sophisticated flavor profile that comes together in perfect harmony, this meat sauce will put most restaurant sauces to shame.

UPDATE: Here’s an awesome fan video by Big Stu who raps this recipe while showing you how it’s done. 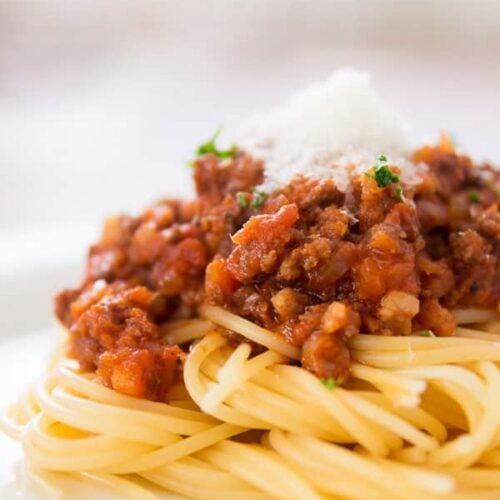 What do you think?92 Cancel reply