Most types of sushi rolls on the menu at sushi restaurants outside of Japan aren’t very traditional, but Shrimp Tempura Sushi or Ebiten Makizushi is a type of cooked sushi that’s made in homes around Japan. I’ve taken the highlights of both the Japanese and Western versions in my tempura roll recipe and created a hybrid that’s the best of both worlds.

With crunchy shrimp tempura, creamy slices of avocado, and crisp lettuce rolled with sushi rice and nori, this tempura roll has a mouthwatering combination of textures and flavors that makes these as fun to eat as they are delicious.

How to Make Shrimp Tempura for Sushi

Since tempura shrimp needs to stay crunchy when rolled with rice and other ingredients, there are a few key differences in its preparation that you usually wouldn’t do for tempura.

I also recommend removing the sharp spike on the tail, called the telson. Then you want to use a knife to squeegee the water out of the tail. These steps will prevent the tail from popping, which can send hot oil flying all over the place when you fry it.

Preheat a deep pot with a few inches of vegetable oil to 360°F (180°C). Line a wire rack with a few sheets of paper towels.

Now you want to dust the shrimp meat with a generous flour coating. Try to avoid getting too much flour on the tails.

To make the batter, add the ice water to the cake flour and use a whisk to quickly mix the two together. You want to stop when the batter is barely mixed, and there are still some small lumps in it.

To fry the shrimp, grab each one by the tail and dip the body into the batter to coat it evenly (don’t coat the tail). Lower the shrimp into the oil as you shake and pull it. This ensures the shrimp ends up as long as possible with frilly batter. Fry the shrimp until crisp (about two minutes). When the tempura is crispy, transfer it to the prepared rack to drain and repeat with the remaining shrimp.

If you want your shrimp to be juicy and don’t mind the batter losing its crunch, you can proceed to make the roll. However, if you want the shrimp crunchy, fry the shrimp again for an additional two minutes.

How to Roll Shrimp Tempura Sushi

To make the spicy mayo, add the mayonnaise and mustard into a small bowl and stir together. Line a makisu (bamboo mat) with plastic wrap. Prepare a bowl of tezu by mixing a tablespoon of rice vinegar into a cup of water.

Lay a sheet of nori on the prepared sushi mat. Since the nori will be inside the roll, it doesn’t matter which side is facing up, but you do want to place the nori so the long edge is facing you and the short edges are to the sides.

Wet your hands with the tezu and grab a handful of sushi rice. Spread the rice in a log at the top of the nori, from one side to the other. Keeping your fingers wet, pick and place the rice to spread it towards you in a thin, even layer. Repeat with another handful of rice if needed.

Spread some tobiko on the lower half of the rice and then grab the two corners of nori and rice closest to you, and flip the sheet away from you, so the two corners you were holding are furthest from you.

Place two strips of lettuce just below the midline of the nori. Stagger a few wedges of avocado on top of the lettuce, and then top with two pieces of shrimp tempura with the tails sticking out the sides of the roll. Finally, top the tempura with some of the mustard mayonnaise.

Now pull the edge of the mat up and use it to roll the roll the rest of the way. Wrap the roll with the makisu with the seam facing down. Then apply even pressure to the mat to finalize the shape of the roll.

To cut the sushi, use a wet paper towel to wipe down a long sharp knife and cut both ends off the roll. You want to cut these thick enough, so they don’t fall apart. Be sure to wipe the blade after each slice.

Cut the remaining roll in half and line the two halves up. Slice the halves into thirds and stagger each piece of sushi so you can see the fillings. Plate and serve with soy sauce and sushi ginger.

What is a Shrimp Tempura Roll?

Shrimp Tempura Roll or Ebiten Maki Sushi (エビ天巻き寿し) is a type of maki sushi or sushi roll that includes tempura fried shrimp rolled in sushi rice and nori. In Japan, the roll is usually made with the nori on the outside. Outside of Japan, it’s often rolled uramaki-style (inside out), with the rice on the outside. Although it’s become a staple in sushi restaurants around the world, here in Japan, it’s mostly a dish that’s made at home, and you’re unlikely to find it on the menu at traditional sushi restaurants. A similar roll can also be made with Ebifry, which involves shrimp breaded in panko.

How do you pronounce Ebiten Maki Sushi?

Ebiten Maki Sushi is a 7-syllable name. Because maki-sushi is a compound word, the first consonant of the second half undergoes a transformation called Rendaku. This changes its pronunciation from “s” to “z”. The whole name is pronounced as follows (read the italicized parts).

The shrimp and rice in this roll are fully cooked. The avocado and lettuce are raw.

What is in Shrimp Tempura Roll?

There are no hard and fast rules, and the roll’s contents often vary by who makes it. In Japan, the most typical fillings are shrimp, lettuce, and mayonnaise. Outside of Japan, common fillings include avocado and cucumber, and the roll is often topped with teriyaki sauce (a.k.a. “unagi sauce”) 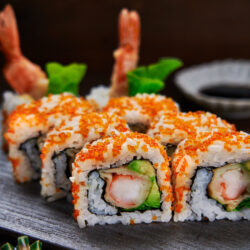