Chirashi Sushi is a traditional style of Japanese sushi that’s probably the inspiration behind most modern sushi bowls. With sushi rice topped with a scattering of colorful toppings, it’s an easy, flexible way of making sushi at home using the ingredients that are available to you. That’s why this Chirashi bowl was one of the first recipes to come to mind when Mizkan™ offered to sponsor a recipe here.

Mizkan is a family-owned Japanese brand that’s been making vinegar and sauces for over 215 years. It’s the brand of vinegar my mom always used for making her Chirashi Sushi when I was growing up in the US. Now that I’m back in Japan, I have many choices, but they’re still my go-to brand for rice vinegar.

How to Make Chirashi Sushi

The first thing you want to do is prepare the rice. To do this, you want to rinse the excess starch off of the surface of the rice by putting it in a sieve and agitating it with your hands under cold running water. When the water runs almost clear, drain it well and transfer the rice to a deep pot or rice-cooker bowl.

If you are using a rice cooker, fill the water a smidge below the two-cup marker (to account for the extra liquid we add when we season the rice). If you are doing this in a pot, add 1 1/2 US cups of cold water to the pot and cover it with a lid. In both cases, you want to let the rice soak for 30 minutes before you start cooking it (note: some rice cookers have pre-soaking built into the cycle, so check your manual to determine whether you need to do this or not).

While you wait for the rice to soak, make the sushi vinegar by adding the rice vinegar, sugar, and salt to a bowl with a spout and whisk it together until the sugar and salt are fully dissolved.

For the cooked toppings for the Chirashi Sushi, I start by boiling the carrots in a pot of well-salted water. When they’re soft enough to pass a toothpick through, I add the trimmed snap peas and cook them for about 30 seconds. You want them to be vibrant green but still very crisp. Next, use tongs or a slotted spoon to transfer the veggies to a bowl of cold water to chill them rapidly.

Add the peeled and deveined shrimp to the boiling water and give it a stir. Turn off the heat and let the shrimp poach until they become a vibrant orange, turning from translucent to opaque all the way through the center. You can cut one in half to check. Transfer the shrimp to a bowl of cold water to chill them and prevent overcooking.

For the Kinshi Tamago, break the eggs into a bowl and use chopsticks or tweezers to remove the chalaza (the white membranes near the yolk). Add a pinch of salt to season the egg and beat them until they’re uniform in color. You want to try and avoid making bubbles in the mixture because these can create holes in the thin omelets when you cook them. The best way to do this is to use a side-to-side motion rather than a circular whisking motion when beating them. If you do end up with bubbles or weren’t able to remove all of the chalazae, you can pass the egg through a fine-mesh strainer to remove them.

Heat a non-stick frying pan over medium-low heat until it’s too hot to touch but not so hot that a drop of water will sizzle. Swirl the vegetable oil around the pan and use a folded-up paper towel to spread it around and remove any excess beads of oil.

Pour about a quarter of the egg mixture into the pan and swirl it around immediately to create a thin, even layer of egg. Let this cook undisturbed until the edges of the omelet start to dry out and easily pull away from the pan. Next, flip the egg over and cook the other side for a few seconds before transferring it to a cutting board. Repeat this process three more times until you’ve used all of the egg. If you notice the egg browning, it means your heat is up too high, so turn the heat down a bit.

Once all of the egg has been cooked, stack them on top of each other on the cutting board and then roll them together into a log. Use a sharp knife to slice them into thin threads.

For the fish, cut it into bite-sized cubes.

For the snap peas, cut a “v” into the center of each one to create leaves. Play around with different angles to create different shapes of leaves. You also cut the coins of carrots into flowers using a vegetable cutter.

By now, your rice should be done soaking, so either turn the rice cooker on or move the pot over to the stove and turn it on to high heat.

If you’re making the sushi rice in a pot, bring the water to a boil and then turn down the heat as low as it will go and set a timer for 15 minutes. The goal here is to have the rice absorb all of the water. Depending on your setup, it can take 2-3 minutes less time, so check it periodically to ensure you don’t burn the rice. Once the water is gone, turn off the stove and then set the timer for another 10 minutes to allow the rice to steam. Be sure you don’t open the lid.

Once the rice is done steaming, transfer it to the largest non-reactive bowl(glass, plastic, or wood) you own and then drizzle the sushi vinegar evenly over the rice. The reason for this is that you want to spread the rice over a large surface area to get the excess liquid to evaporate quickly.

Use a spatula or a rice paddle to incorporate the sushi vinegar so that each grain of rice has an even coating. I usually use a folding motion followed by a cutting motion, being careful not to smash the individual grains of rice.

Next, you want to rapidly cool the rice by fanning it while you fold. Then, when it’s down to room temperature, you can assemble your Chirashi Sushi in serving-sized bowls or on a large serving platter.

After adding the rice to the serving vessel of your choice, sprinkle it with the toasted sesame seeds.

Blanket the top of the rice with the egg and then top your Chirashi Sushi with fish, shrimp, and vegetables along with whatever other garnishes you’d like to add (I used some ikura and edible flowers).

What is Chirashi Sushi?

Chirashi Sushi is a traditional Japanese style of sushi that’s served in a bowl. The name literally means “scattered sushi,” and it gets its name because the toppings are scattered over a bowl of sushi rice. Although the toppings can include raw seafood, many versions of Chirashi Sushi don’t have any raw ingredients, and some don’t include any seafood either. The exception is sushi-restaurant-style Chirashi, which focuses on sashimi that’s neatly arranged on top of the sushi rice.

How do you pronounce Chirashi Sushi?

chi like cheek
ra the “ra” sound does not exist in the English language, and the best way to make it is to say the word “romp” with the tip of your tongue at the front of your mouth.
shi like sheet
zu like zoo
shi like sheet

How to eat Chirashi Sushi

Chirashi Sushi isn’t like other types of sushi that you can pick up with your fingers and dip in soy sauce. The two options you have are to serve it with a small dish of soy sauce for people to dip the various toppings in. Otherwise, you can drizzle some soy sauce over the top of the entire sushi bowl.

Although this particular Chirashi Sushi recipe includes seafood and egg, it is easily adapted to be vegan friendly. Just substitute these ingredients for a colorful assortment of plant-based alternatives, such as roasted red bell peppers, tofu marinated with soy sauce and ginger, and shiitake mushrooms that have been simmered in soy sauce and mirin. Here’s a recipe for vegan-friendly Chirashi Sushi. 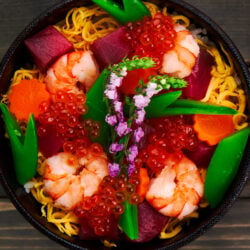