Sutadon, or Stamina Donburi, is a style of pork bowl developed by a ramen shop in Kunitachi, Tokyo, in the 1970s. The late Chef Hashimoto, who owned Sapporo Ramen, is quoted as saying he wanted to create a “cheap and delicious bowl that young people could eat until they felt satisfied.”

In Japan, both pork and garlic are considered stamina-boosting foods due to their high concentration of B vitamins. So chef Hashimoto experimented with different combinations of these ingredients to develop this legendary variation on butadon.

While I can’t vouch for its ability to reduce fatigue, I can tell you that the garlicky aroma of this hearty rice bowl will wake up your appetite and power you through the rest of your day.

How to Make Sutadon Pork Bowl

To make the secret sauce for Sutadon, grate the garlic and ginger into a bowl. I used a daikon grater for this, but a Microplane or the rasp side of a box grater will work. Next, add the dashi, soy sauce, sake, and sugar to the bowl and stir the ingredients together to combine.

To prepare the pork belly, bring a pot of water to a rolling boil over high heat and then parboil the meat in two batches. Once you add the pork, give it a stir to separate each slice. Once the water comes back to a boil and the pork is cooked through, transfer it to a bowl of cold water to stop the cooking.

Repeat with the remaining pork and then drain the meat in a colander. Press on the meat with your hand to squeeze out any excess water.

Pour the sauce ingredients into a frying pan and bring the mixture to a boil. Cook the sliced scallions with the sauce until they’re vibrant green.

Add the parboiled pork to the sauce and glaze the slices with sauce until almost no liquid remains in the pan.

To assemble the Sutadon, slice the cooked rice between two serving bowls and top with the garlicky pork belly. Top the Stamina Butadon with a hot spring egg and garnish with some chopped scallions, pickles, and chili paste to taste.

The name “Sutadon” is an abbreviation of Stamina Buta Donburi, and it’s a style of pork bowl that was popularized by a chain of quick-service restaurants called Densetsu no Sutadonya (伝説のすた丼屋) or the “Legendary Sutadon Shop.” Their trademark dish is a rice bowl topped with thinly sliced pork belly that’s loaded with garlic flavor. It’s then topped with a raw egg and served with pickles and chili sauce.

How do you pronounce Sutadon?

Sutadon is a 3-syllable name pronounced as follows (read the italicized parts).

Can I make Sutadon with other types of meat?

It won’t be quite the same as the original, but the sauce is loaded with flavor and would work well for other cuts of pork or even other proteins such as chicken, beef, shrimp, or even tofu. One thing I would advise changing is the parboiling step for the meat. This is only necessary with a fattier cut of meat like pork belly. For other types of meat, I would recommend pan-frying it first and then finishing it off with the sauce. 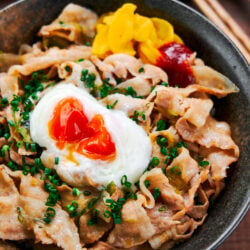