“Teriyaki” literally means glossy grilled in Japanese, and although boneless chicken teriyaki can be made in a frying pan, the method doesn’t work great for wings. That’s why I’ve developed this easy two-step method that will get you tender flavorful wings, glazed in a gloriously glossy teriyaki sauce. They don’t require much work, and most of it can be done in advance, so I hope you give these a shot!

How to Make Teriyaki Chicken Wings

To braise the chicken wings, you want to add the ginger and garlic into a pot and then place the wings in it, minimizing the amount of space between the pieces of chicken. This ensures that the liquids cover most of the wings when we add them in.

Pour the sugar, soy sauce, and sake onto the chicken, and then put the pot over high heat to bring the liquid to a boil. Cover the pot with a lid and turn down the heat to maintain a steady simmer. You want to let this braise for 15 minutes for the sauce to soak into the chicken and for the fat in the chicken to render out.

While the chicken is braising, preheat the oven to 430 degrees F (220 C) and prepare a sheet pan by placing a metal cooling rack on top.

When the timer is up, transfer the wings to the rack and let the surface of the chicken dry out for a few minutes.

There’s no longer liquid on the surface of the chicken. Put the pan in the oven and bake them until the skin is a rich brown color. This took about 10 minutes in my oven, but it may take a little less or a little more time, so keep a close eye on your teriyaki wings to ensure they don’t burn.

To finish the teriyaki glaze, strain the braising liquid into another pot and skim off the excess fat using a spoon. Boil the braising liquid to reduce it until the bubbles are big and shiny and it’s relatively thick. The gelatin from the chicken will cause the sauce to get thicker as it cools, so it doesn’t need to be super thick at this point.

Once your chicken teriyaki wings are down browning, remove them from the oven and brush or spoon on the teriyaki sauce.

The plate pictured above was sent over by Musubi Kiln. They have a fantastic selection of both classic and modern Japanese ceramics and tableware and they ship around the world. Get 5% off your order by using coupon code “NORECIPES” at checkout.

Can I make these in advance?

Yes, you can braise the chicken wings in advance. Just be sure to let the wings cool to room temperature on a wire rack completely before refrigerating them. This ensures the surface of the wings gets nice and dry so the oven can get right to work, browning the skin when you go to finish them off. Then you just put the wings back on a rack over a sheet pan and bake them as explained in the recipe.

How long does it take to bake chicken wings?

Because the wings in this recipe are braised on the stove first (to season and tenderize them), you should only need to bake them for about 10 minutes to brown the skin and finish them off.

Will the wings be crispy?

No, teriyaki chicken wings won’t be crispy because the sugar in the teriyaki sauce will burn before the skin can crisp. That being said, with most of the fat in the skin rendered out during braising, the skin is not flabby or fatty. If you really want crispy Japanese-style wings, try out my Tebasaki recipe, which turns out cracklingly crisp wings.

How to air fry chicken wings?

You’ll still want to braise the wings on the stove once to season them and render out excess fat, but you can finish them in an air fryer instead of the oven. To do this, set the air fryer for 400 F (200 C). Add the chicken to the basket in a single layer without having the pieces touch each other. Air fry for 10-15 minutes, or until the skin is mahogany brown. 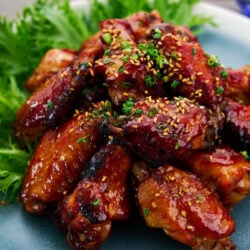