While most of the world knows Japan for only one soup, there’s more to the Japanese soup repertoire than miso soup. Tonjiru (豚汁), which is also sometimes called Butajiru, literally means “pork soup” and is a mainstay at the dinner table during the frigid months of winter. To make the preparation fast, the pork is usually sliced thin and the vegetables are chopped small. For my version I’ve turned it into a stew, with big chunks of pork belly, konnyaku, carrot, and taro.

Burdock is full of fiber and is a great source of iron and other minerals, but it also adds a wonderful earthy flavor that compliments the pork. Once peeled, it tends to oxidize very quickly, so you need to quickly get it into a bowl of cold water that’s been acidified.

While I love having rich, tender chunks of pork belly in this stew, you can use a slightly leaner cut such as spare ribs or pork shoulder. Please don’t ruin a perfectly good loin by using it in a stew. Long cooking times work in favor of tougher fattier cuts of meat, turning the sinewy connective tissues into silky collagen and rendering out the excess fat. Because leaner cuts of meat are short on fat and collagen, they start out tender, but quickly turn into tough dry nuggets with a texture akin to damp dryer lint.

For those of you that don’t eat pork, you could substitute chicken thigh meat for the pork. Since chicken takes less time to become tender than pork, you can also cut out the 40 minutes of simmering time, adding all the vegetables in with the water. For vegans, there’s a similar soup called Kenchinjiru you might want to try. 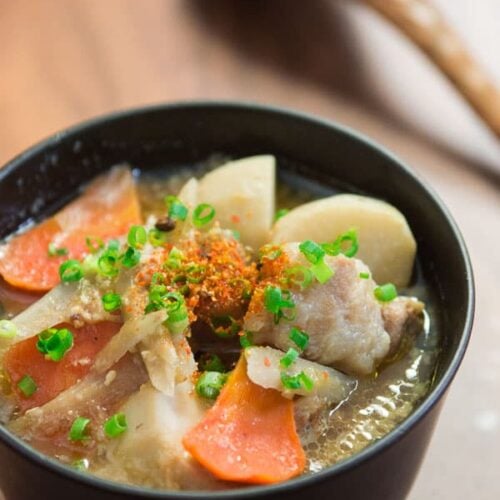