After making scallion pancakes last week, I still had a ton of scallions left over. Rather than let them dry up in the veggie drawer and toss them out, I made a quick a stir-fry with some marinated beef and a TON of scallions. Usually, these no recipe “staff meals” end up being one-off creations, but this one was so good, I ended up going out to buy more scallions so I could make it again and document the process to share with you guys!

Fifteen minutes is all you need to make these luscious beef and scallion noodles with moist, tender slices of beef and verdant scallions that are still just a bit crisp. The savory sauce enrobes the bed of al-dente noodles below, which are perfumed with the heady aroma of toasted sesame oil and spicy ginger. This not only keeps them from sticking together, it makes them the perfect compliment to the stir-fry above.

By briefly marinating the beef, it not only ensures that each bite of meat is well seasoned, the starch in the marinade helps lock the juices in the meat so that it resists getting dried out. The marinated beef gets quickly stir-fried with the white parts of the scallions before a simple soy-sauce-based sauce is added. The green parts of the scallions go in at the very end, taking their pungent edge off, while retaining their vibrant color, and a whisper of crispness.

For the beef, you want to use a moderately tender cut that has a bit of fat in it. Fillet is very tender, but it doesn’t have much fat, which will make it dry. Chuck and short-rib on the other hand has too much fat and gristle. I like using cuts like brisket, flank, or skirt-steak for stir-fries where the meat is being sliced thin, because they have the right balance of meat and fat. Although they’re not super tender, they don’t have much gristle, so as long as you slice them thinly against the grain, they’ll be perfect in your finished dish.

While the list of ingredients is a bit long, many of them such as the two types of soy sauce are easily substitutable, so there’s nothing very complicated about the recipe. The only tricky part is getting the timing right so that the beef and noodles finish at the same time. Since different noodles take different amounts of time to boil, you’ll have to figure out when to start the beef based on the amount of time your noodles will take. For me, the stir-fry portion was done in just under 2 minutes. If in doubt, it’s better to have the noodles done and tossed with the sesame oil and ginger, than to have your stir-fry sitting around while you wait for the noodles to finish cooking. 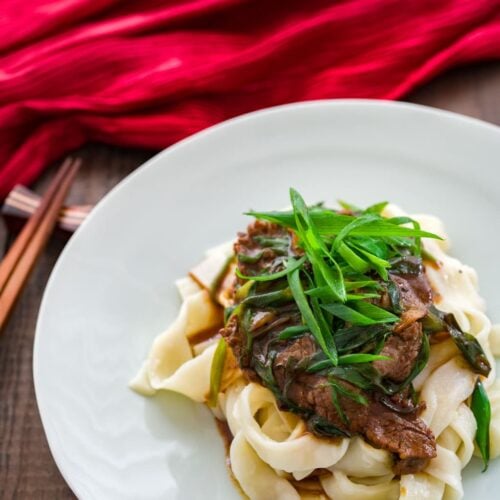 For beef and marinade