What is Chicken Paprikash?

Going back to its origins in Hungary, the dish is called “Paprikás Csirke”, which literally means “Paprika Chicken.” As the name would imply, its namesake spice plays a major role in the flavor of the dish, which gives it a similar flavor profile to other traditional Hungarian stews such as Goulash.

Like its Russian cousin Beef Stroganoff, this Hungarian recipe has managed to work its way from relative obscurity into the hearts and stomachs of comfort food seekers around the world. For my version, I like to make it with bone-in chicken pieces, fresh green peppers, sour cream, and of course: tons of paprika.

While chicken breast meat can be delicious when cooked to the right temperature, it’s very lean, which is why it tends to get dry and mealy when overcooked. Since stews like this Chicken Paprikash require longer cooking times, I highly recommend using leg meat such as chicken thighs and drumsticks.

I like using bone-in skin-on chicken legs which not only adds more flavor to the sauce, it also keeps the meat moist and juicy. The one exception is if you are in a hurry. It won’t be quite as flavorful, but you can shave about thirty minutes off the cooking time if you use boneless chicken thighs cut into cubes. Just follow all the same steps and reduce the amount of chicken to about 600 grams.

You’ll want to use good Hungarian paprika. I’m not saying this because I have a problem with paprika from other countries (I have four cans of Spanish paprika in the pantry). Nor is this about some misguided loyalty to the dish’s roots. My recommendation is merely a practical one. There are so many different kinds of paprika, with colors ranging from orange to blood red, tastes running from spicy to sweet, and flavors going from smoky to fruity, the paprika landscape can get a little confusing.

Thankfully in Hungary, the national spice is divided into eight grades, each one with its unique characteristics. The one that’s most commonly found in the US is called édes nemes or “noble sweet” which is full-bodied, fruity, and a stunning vermillion hue; perfect for Chicken Paprikash. If you can’t find it a more generic sweet paprika will work in a pinch.

While paprika provides the primary flavoring for its eponymous dish, I first learned to make this dish from a Hungarian lady who always added some fresh green peppers to her Paprikash. The difference between red peppers and green ones is how ripe they are when they’re picked. This is why red peppers tend to be sweeter while green peppers tend to have a more concentrated flavor than their fully ripened counterparts.

I’ve tried making this with and without adding fresh peppers, and I’ve found that adding green peppers gives the dish a more robust flavor. I used a local variety of green chili called Piiman, but any mild green pepper such as Bell, Cubanelle, or Yellow Wax Peppers (a.k.a. Banana peppers) will work.

Chicken Paprikash is finished off with a generous dollop of sour cream. This adds a mild tang, balancing out the richness of the stew while imparting a roundness that adds depth and dimension to this humble dish. It won’t be quite the same, but if you’re trying to cut back on fat, a strained yogurt does a pretty decent job as a substitute for sour cream. Finally, if you need to make this kosher, you can use raw cashew nuts pureed with water and a bit of lemon juice in a blender to approximate the richness and acidity of the sour cream.

How to Make Chicken Paprikash

For my Paprika Chicken recipe, I like to build a strong foundation of umami by browning the chicken in batches. Then the onions and peppers get caramelized in the same pot. To this base layer of flavor, the paprika gets added and sauteed for a few seconds. The high temperature helps the spice release its full bouquet of aromas, particularly if your paprika isn’t the freshest. Just be careful not to burn it as it’s easy to do, and will make your sauce bitter.

Next, some chicken broth goes in before the chicken gets added back and simmered until the meat is fall-off-the-bone tender. Finally, a roux of sour cream and flour is made to thicken the sauce, but you don’t want to add it directly to the stew. Since adding cold sour cream to a hot liquid will make it curdle, it’s important to temper the mixture by slowly introducing the hot cooking liquid to the roux until it is warm, before adding it to the pot.

What to serve with Chicken Paprikash

The classic pairing is a small Hungarian dumpling called Nokedli which is similar to German Spaetzle. They’re made with eggs and flour and can be prepared from scratch while you’re waiting for the chicken to cook. In the US, Paprika Chicken is usually served with egg noodles, but I find the craggy surface of Nokedli is better suited for hanging onto the delicious Paprikash sauce. Other suitable options include boiled potatoes, mashed potatoes, rice, or bread. 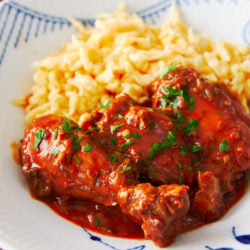 What do you think?86 Cancel reply