Teriyaki is a simple preparation method of grilling a protein and glazing it with a sweet and savory sauce. It’s a delicious way to prepare whole cuts of chicken, but you can also turn it into a chicken teriyaki bowl by making it with bite-sized pieces of chicken and serving it over a bowl of rice with an assortment of veggies. It’s a quick and easy way to make a 1-bowl meal that’s also perfect for packing into a bento box lunch.

How to Make Chicken Teriyaki Bowl

The first thing you want to do is make two servings of the grain or seed of your choice to serve the teriyaki chicken on.

Then you can cut and boil your choice of veggies to serve with the chicken. I like to use an equal amount of veggies to chicken, and depending on what you’re making; you’ll want to add them to the boiling water at different times to ensure you don’t over/undercook something. For example, if you’re using carrots and broccoli, like me, boil the carrots for 7-10 minutes and then add the broccoli to the water after the carrots are tender. Broccoli cooks very quickly, so returning the water to a boil after adding the broccoli is usually enough to cook it through. When the veggies are done, drain them and set them aside.

You can start on the teriyaki chicken while you wait for the vegetables to boil. If you are using skin-on chicken, you’ll want to place them skin-side down in a non-stick frying pan off the heat. Then you can put them over medium-low heat to render out the fat from the skin. If you are using skinless chicken, you’ll want to preheat the pan and add a splash of vegetable oil before adding the chicken.

Once the chicken is cooked two-thirds of the way up (you’ll see it go from translucent pink to opaque beige), flip the chicken over and continue frying it on the second side until it is cooked through. The chicken will get cooked some more as it is glazed, so don’t overcook it. Transfer the chicken to a plate, and then use paper towels to wipe out the oil and browned bits from the pan, as these will cloud your teriyaki sauce.

Once the pan is cleaned out, add the sake, soy sauce, and sugar and turn up the heat to bring the mixture to a boil. Boil the teriyaki sauce until it’s forming big bubbles, and it’s the consistency of maple syrup.

Put the chicken back in the pan and then toss or stir it together with the sauce to glaze each piece evenly.

Assemble your chicken teriyaki bowls by placing a serving of rice (or your chosen grain/seed) in the bottom of a large bowl and then top half of it with chicken. Next, arrange the vegetables on the other half and finish the rice bowls by drizzling the remaining teriyaki sauce all over the chicken and veggies.

What is a teriyaki bowl?

Teriyaki bowl is the English translation of Teriyaki Donburi (照り焼き丼). Donburi literally means bowl, but it’s also used to describe a class of dishes, and it’s often shortened to just “don.” Teriyakidon can be made with any protein that’s been glazed with teriyaki sauce served over a bowl of rice.

How do you pronounce Teriyakidon?

te like ten
ri the “ri” sound does not exist in the English language, and the best way to make it is to say the word “ream” with the tip of your tongue at the front of your mouth.
ya like yacht
ki like key
do like don’t
n like night

The word “healthy” is relative to your own beliefs, so I don’t like to use the word to describe food. That being said, you can check out the nutrition information and calories in the recipe card below and come to your own decision about whether it fits into your diet or not. Personally, I like the balance of vegetables, protein, and carbs this meal provides, but it is not something I would eat every day due to the large amount of sugar in the sauce.

How can I make a vegan teriyaki bowl?

Teriyaki sauce will make just about anything taste delicious, so you can just substitute the chicken for some other source of protein such as tofu, TVP, or tempeh. Then, just pan-fry bite-sized pieces of your choice of plant-based protein with some vegetable oil. Then you can follow the rest of the directions to glaze it with the teriyaki sauce. 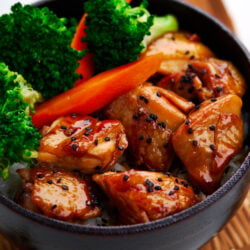