Ebi Chili (エビチリ) is a Chinese-style Japanese dish created by Chen Kenmin in the 1950’s. Chen, originally from the Sichuan province in China emigrated to Japan, opening Shisen Hanten (Sichuan Restaurant) in 1958. He later went on to introduce Chinese dishes to households all over Japan through TV appearances on NHK.

While there were many Chinese restaurants in Japan before Shisen Hanten, Chen abandoned traditional recipes in favor of new interpretations suited to Japanese tastes. Some might call his actions traitorous, but he’s widely regarded as the father of Japanese style Sichuan cuisine, popularizing such favorites as Mapo Tofu and Ebi Chili.

While Ebi Chili is usually made using doubanjiang (tobanjan), I prefer using a combination of sriracha and Thai sweet chili sauce. The heat comes from the sriracha, the sweetness comes from the Thai chili sauce and both sauces contain garlic which adds complexity to the dish without complicating the preparation.

Soaking the shrimp in an alkali solution gives the shrimp a firm, almost crunchy texture. It’s then lightly coated in potato starch and blanched in hot oil to quickly cook it before being tossed in a sweet and spicy sauce. Because it’s a Japanese dish, it’s pretty mild, so if you want to make it spicier, just add more sriracha. 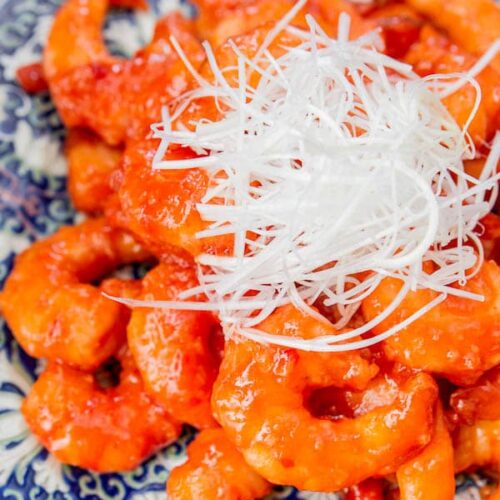 What do you think?34 Cancel reply