Traditional Japanese breakfasts do tend to involve a lot of components, but none of them are complicated, and this Shiozake, or grilled salted salmon, is no exception. It was originally made by salting whole salmon to preserve it, but these days most people opt to cure salmon filets in brine. This is not only faster, but it also gives more control over how salty you want the salmon to be.

How to Make Japanese Salted Salmon

To salt the salmon, you want to first make a brine by mixing the water, salt, and mirin together until the salt is fully dissolved. I usually do this in a storage container so I can drop the salmon in, cover it and store it in the fridge.

You want to let the salmon brine for at least twelve hours to ensure it’s uniformly seasoned, but don’t let it go for longer than a day; otherwise, the proteins will start to denature and make the salmon mushy.

When the salted salmon is cured, remove it from the brine and pat it dry using paper towels. Then you can grill it up to make breakfast salmon, or you can wrap it in plastic wrap and store it for a few days in the refrigerator or a few months in the freezer.

How to Cook Japanese Breakfast Salmon

Most Japanese kitchens have a small broiler under the stove to grill fish. You can grill the fish in a toaster oven (or a full-size oven) set to broil. Just put the fish on an oiled rack and set the rack on a sheet pan.

The other option is to pan-fry the salted salmon. To do this, you’ll want to preheat a frying pan over medium heat and add a small splash of oil.

Lay the salmon skin-side down into the pan and let it fry until it’s golden brown on the skin-side, and the salmon has turned opaque about a third of the way up the side. If the salmon looks like it’s browning too quickly, reduce the heat.

Flip the salmon over with a spatula and fry the second side until the salmon is cooked through. Depending on the shape of the salmon, you may need to use the spatula to press it down in parts to ensure the whole surface of the salmon is making good contact with the pan.

The salmon is done when it flakes easily and is opaque to the center. If you’re using an instant-read thermometer, check that it read an internal temperature of 140 degrees F (60 C).

How to Prepare Daikon Oroshi

Grated daikon or daikon oroshi(大根おろし) is a condiment that often accompanies grilled fish like this salted salmon. It’s made by grating daikon and then draining off excess water. It may sound simple, but there are a few essential things to know before you make it.

Serve the daikon oroshi with the Japanese breakfast salmon. You can also drizzle some soy sauce or lemon juice onto the daikon if you like.

How to Make Japanese Breakfast?

Traditional Japanese meals follow the format of Ichiju Sansai (一汁三菜), which literally means “one soup three sides.” Japanese breakfasts are no different, and a full breakfast usually consists of plain rice, soup, protein, and a few side dishes. Here are some ideas to get you started:

What is Japanese Salted Salmon?

Also known as Japanese Breakfast Salmon, Shiozake (塩鮭 – salt salmon) is salmon that has been salted to preserve it. Before the widespread use of refrigeration, whole salmon were gutted and packed in salt to cure them. The resulting salmon would be so salty; it would first need to be soaked in water to reduce the salt content before it was used. These days, salted salmon comes in varying levels of salinity with salmon containing less than 3% being labeled as amajio (甘塩), salmon containing 3-6% being labeled as chukara (中辛), and salmon containing over 6% as karakuchi (辛口). This recipe makes

It comes in varying levels of salinity with the mildly salty ones. The brine for this recipe is about 2.3% salt. If you account for the extra mass of the salmon, the salinity drops to about 1.7%. It’s still reasonably salty, though, which makes it an excellent accompaniment for rice.

Can I prepare salted salmon ahead of time?

The salmon needs to be brined for about 12 hours to ensure it is evenly seasoned, so if you plan on making a Japanese breakfast, it’s important to start brining it the night before. Don’t let it brine for more than a day though; otherwise, the proteins will begin to denature, and the salmon will get mushy. If you want to prepare this more than a day in advance, I recommend removing the salmon from the brine after a day, patting it dry with paper towels, and then wrapping the salmon tightly with plastic wrap or in a zipper bag with the air pressed out.

How do you pronounce Shiozake?

But is also often pronounced:

How to eat Japanese Salted Salmon?

Salted salmon is most commonly eaten as a side dish for Japanese breakfast, along with grated daikon radish, rice, and miso soup. However, it can also be packed into a bento box lunch. Because the salmon is well seasoned, it can also be used as a filling for onigiri or to make ochazuke (tea rice).

How long will salted salmon last?

Once the salmon has been removed from the brine, it should keep for an additional three days in the refrigerator. You can also freeze it at this point, but keep in mind that freezing fish in a home freezer will change its texture due to the formation of large ice crystals in the fish as it freezes. Once it’s been cooked, it should be consumed within a day. 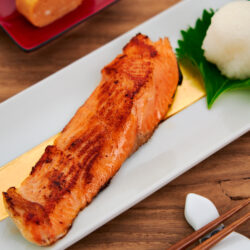