Kinpira Gobo is a classic Japanese side dish often found packed in bento boxes or served as kobachi alongside other dishes in a traditional Japanese meal. It’s most commonly made with gobo, a long root vegetable frequently used in Japanese cuisine, but it can also be made with other veggies such as carrots, celery, or lotus root.

For my version, I like to use a combination of carrots and gobo root, which gives it a nice color and a great spread of vitamins and minerals. Thanks to the earthy flavor of the root vegetables and the umami from the soy sauce and sake, this Kinpira recipe doesn’t include any dashi, making it both vegetarian and vegan friendly.

How to cut gobo for Kinpira

You first want to prepare a bowl of cold water and acidify it by adding a neutral-tasting vinegar, lemon juice, or a pinch of citric acid. This will prevent the gobo root from oxidizing and turning gray.

Wash the burdock and scrub it with a clean abrasive sponge or a wadded-up piece of aluminum foil.

Burdock peel can be eaten, but I usually like to peel it with a vegetable peeler for Kinpira Gobo. The gobo will quickly oxidize once you peel it, so I recommend working in small segments and then cutting the peeled parts into 2-3 inch lengths that you can drop in the acidified water.

Once you’ve peeled and cut up all of the gobo, cut each piece into thin slices. I usually cut one or two slices from one side and then roll the root onto the flat spot so it doesn’t move around.

Then you want to line the slices up in a staggered stack and then cut the slices into thin strips. They don’t have to be perfect, but I try to get the strips under 1.5mm in thickness. Finally, return the cut gobo to the bowl of acidified water.

Because burdock is so thin and fibrous, I do not recommend using a mandoline to julienne it.

How to Make Kinpira Gobo

Before cooking the Kinpira, strain the gobo and rinse it under cold water to remove the vinegar. Shake the strainer vigorously to drain it well.

Into a frying pan over high heat, add the vegetable oil and chili flakes and swirl them around.

Add the drained gobo and carrots and stir-fry them until they start to wilt.

Add the brown sugar and continue stir-frying until all of the water released by the veggies has evaporated. This should take about two minutes.

Pour the sake, soy sauce, and salt over the gobo and carrots, and then continue to stir-fry until the sauce has created a glaze around the gobo and there is no liquid remaining in the pan (another 2-3 minutes).

Finish the Kinpira Gobo by tossing in the toasted sesame seeds and stirring to distribute.

It’s worth noting that Kinpira tastes better the next day, and it will keep for up to a week in the fridge, so I usually like to make a big batch to eat throughout the week.

Other Japanese Side Dish Recipes

What is burdock root (gobo)?

Burdock is a biennial plant that’s found globally. The plant has broad leaves that are green on top and whitish underneath, and the base of the pink flowers has burrs, which is how the plant got its name. In most parts of the world, it is considered a weed, but the taproot is used as a vegetable in Asia. It is long and fibrous and has a distinct flavor that’s earthy and mineral-like. Another fun fact is that the Swiss inventor of Velcro was inspired to make the hook and loop fastening system after taking his dog for a walk and noticing the burrs sticking to its fur.

What is Kinpira Gobo?

Kinpira Gobo is a stir-fry of burdock root and carrots that have been cut into thin strips. It’s usually seasoned with a sweet and savory sauce and finished with sesame seeds.

Can I make Kinpira with other ingredients?

Although burdock root is the most common vegetable, Kinpira can also be made with other crunchy or crispy vegetables such as carrots, celery, lotus root, or kohlrabi. Some people also include a protein such as chicken or fried tofu.

How do you pronounce Kinpira Gobo?

Kinpira Gobo is a 5-syllable name pronounced as follows (read the italicized parts).

kin like keen
pi like peal
ra like the “ra” sound does not exist in the English language and the best way to make it is to say the word “romp” with the tip of your tongue at the front of your mouth.
go like ghost
bo like boat

This Kinpira Gobo recipe is plant-based, making it vegan and vegetarian friendly. However, if you buy it pre-made from a store, be careful as it is relatively common to add dashi stock to Kinpira. 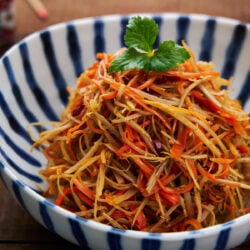