After the introduction of Buddhism to Japan, the consumption of animal products was banned for about 1200 years. This led to the invention of a wide variety of meat and fish substitutes, and unagi is no exception.

While there are various methods to make vegan unagi, I’ve found that the easiest method that results in the closest texture is to use eggplant. By pan-frying and then steaming it in unagi sauce, the eggplant can absorb a ton of flavor. Then, the mock unagi is glazed and blasted with a torch to caramelize the sauce and give it a smoky flavor.

How to Make Vegan Unagi

Trim both ends from the eggplant and then cut it half lengthwise. Make a slit down the center of the cut surface about 2/3 of the way through. Be careful not to cut too deep, or your eggplant will fall apart.

Make shallow slits in the cut surface of the eggplant about 1/8-inch apart from one end to the other. The slits

Cut shallow slits 1/8-inch apart down the length of the cut surface of the eggplant. These slits are primarily cosmetic and only need to be about 1/20-inch deep.

Add the oil to a frying pan over medium-high heat and place the eggplant in the pan with the cut side down.

Use a spatula to press down on the eggplant to ensure the cut surface makes good contact with the pan and let them fry until they’re golden brown.

Once they have some good color, flip them over and then add the sake, soy sauce, and sugar to the pan (make sure you get the sugar in the pan and not on top of the eggplant). Cover with a lid and adjust the temperature to maintain a full simmer.

Steam the eggplant until it is tender (about 7 minutes. Be sure to flip the eggplant over about halfway through and keep an eye on the amount of liquid in the pan to ensure it doesn’t burn (you can add some water if it’s looking too thick).

When the eggplant is cooked through, transfer it to a wire rack with the cut-side facing up. You can gently press on the eggplant a bit to flatten it out if you like.

The sauce in the pan should be thick and syrupy at this point, but if it’s not, you can boil it for a little longer to thicken it up. Next, use a spoon or pastry brush to glaze the tops of the eggplant with the unagi sauce in the pan.

Use a kitchen torch to caramelize and lightly char the glaze on the eggplant. It’s crucial the air-fuel mixture of your torch is set correctly, or your food will end up tasting like gas (see the video below for more info on this).

If you don’t have a torch, you can also use an oven set to broil.

Serve the vegan unagi over rice with any remaining unagi sauce drizzled over the rice. Garnish with chopped scallions.

The bowl, condiment plate and chopstick rest pictured above was sent over by Musubi Kiln. They have a fantastic selection of both classic and modern Japanese ceramics and tableware and they ship around the world. Get 5% off your order by using coupon code “NORECIPES” at checkout.

What is Unagi Don?

Unagi is the Japanese word for eel, and don is short for donburi, the name for a large rice bowl. The dish usually consists of grilled and glazed eel on top of a bowl of rice, but there is a plant-based alternative called Unagi Modoki Don (うなぎもどき丼), which literally means “mock unagi rice bowl.” Since meat consumption was banned in Japan for about 1200 years, a rich cuisine of mock meat and seafood was developed, including plant-based alternatives to unagi like this.

How do you pronounce Unagi Don?

Unagi don is a four-syllable name pronounced as follows:

What is unagi sauce?

Unagi sauce is the Western name for Japanese kabayaki sauce. The ingredients for kabayaki sauce and teriyaki sauce are identical (consisting of soy sauce, sugar, sake, and sometimes mirin), but the difference is in how the dishes are prepared.

While it may not always be vegan due to the way restaurants handle it, the unagi sauce in this recipe is plant-based. 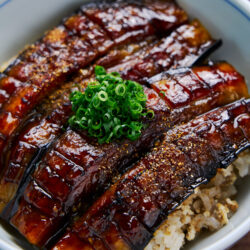