I often hear from people that are surprised by the lack of rolls at sushi restaurants in Japan. For those that only eat rolls, it can be a problem, but for those that are a little more adventurous it’s a chance to try authentic nigiri sushi that you’d have a hard time finding in the US. While nigiri sushi prepared by the hands of a master sushi chef is a thing of beauty, I grew up in California and love me some rolls. Along with the California Rolls, Caterpillar Rolls rank among my favorites.

To be honest the origins of the Caterpillar Roll are anyone’s guess. My hunch is that it was created by an enterprising sushi chef at an American strip-mall sushi joint who was trying to sell more unagi. Whatever the origins may be, the Caterpillar roll is probably single handedly responsible for turning something that was “ewww!” inducing (unagi is a slimy fresh water eel after all) a generation ago to something that’s sold at supermarket sushi counters across the country.

If you’ve been to a sushi restaurant in the US over the past decade, chances are you’ve either had one or saw it on the menu. For those who haven’t, let me reassure you that this isn’t an episode of Bizarre Foods, where Andrew Zimmern eats butterfly larva. Indeed, there were no butterflies harmed in the making of this post.

It’s called a Caterpillar roll because the rice is enshrouded with thin slices of overlapping avocado. With stripes of dark kabayaki sauce drizzled on top, and sesame seeds dotting the roll, it doesn’t take a stretch of the imagination to see the resemblance.

If you’ve ever wondered what the difference is between Kabayaki and Teriyaki sauce, you’re not the only one. After a little research, it turns out that they’re one in the same. The difference comes in the preparation of the dishes that the sauce is used in. Kabayaki is usually prepared by skewing things such as unagi, and then grilling them. The sauce is applied by dipping the skewer directly in a tub of sauce during cooking. Teriyaki on the other hand is made by grilling and using a brush to apply the marinade.

Since this roll is neither grilled nor skewered, I deliberated on what to call the sauce, but since the unagi is made kabayaki style it made sense to carry the same name over for the glaze. Together with the tangy sushi rice, crunchy cucumber, creamy avocado and rich unagi, the kabayaki sauce provides a sweet and savory glaze that makes this a hit for all ages.

What is a Caterpillar Roll?

Caterpillar rolls are a type of non-traditional sushi roll made by rolling unagi and cucumber in nori and sushi rice and then topping the roll with sliced avocado. The avocado creates a striped pattern on top that resembles a caterpillar, where the roll gets its name.

What’s in a Caterpillar Roll?

Caterpillar Rolls are most commonly stuffed with unagi kabayaki (grilled eel) and cucumbers and then topped with avocado. That being said, they can include other ingredients like tobiko, shrimp tempura, or crab.

What do I serve Caterpillar Rolls with?

Caterpillar rolls go great with pickled sushi ginger and some extra sauce drizzled on top. If you’re doing a sushi night, how about making a batch of my spicy tuna roll recipe as well as my California rolls. 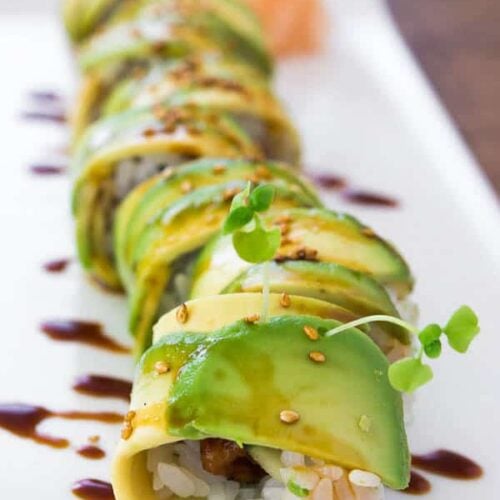