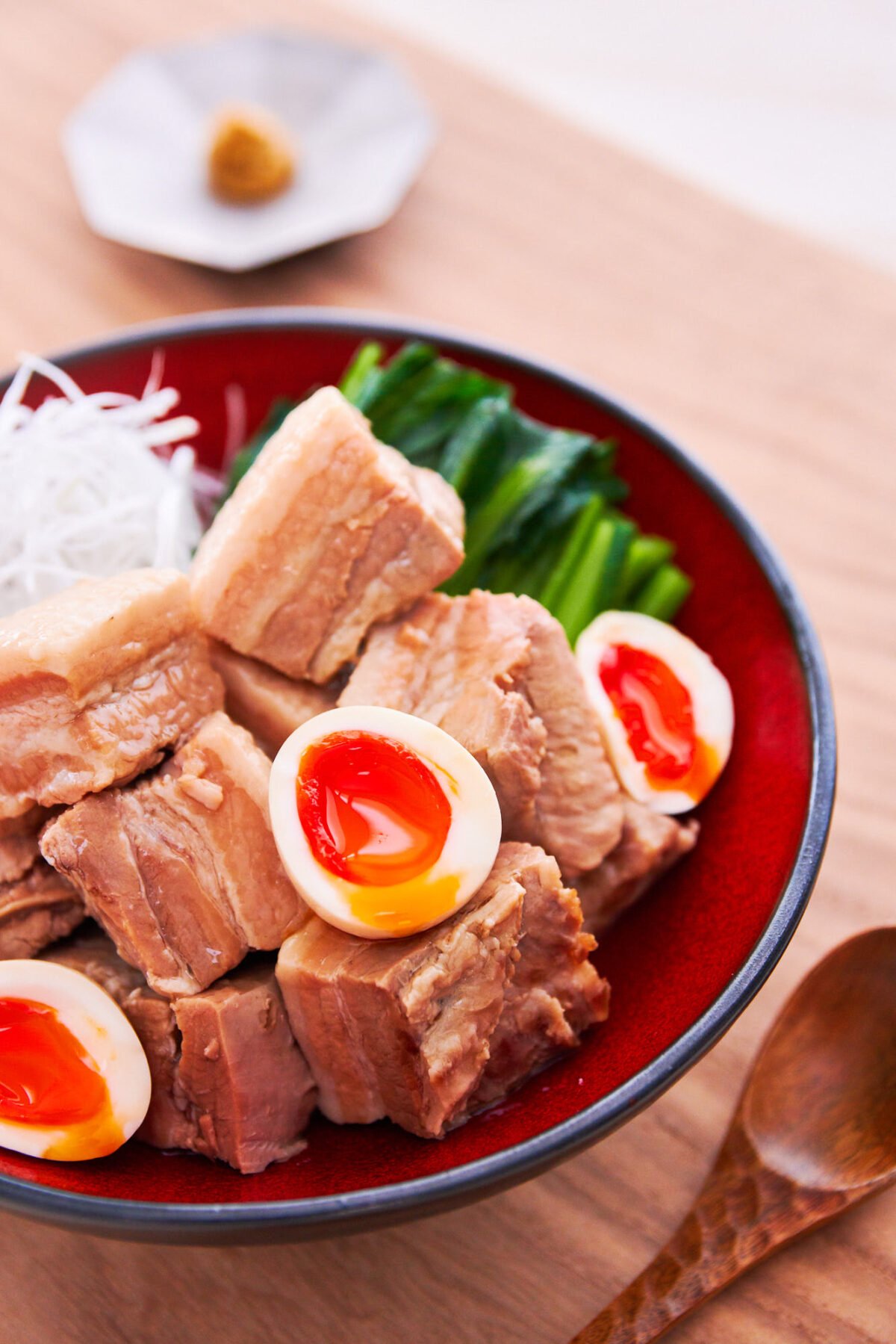 Kakuni (角煮) literally means “simmered cubes,” and is a dish hailing from the island of Kyushu in southern Japan. It’s made by simmering cubes of pork belly with aromatics such as ginger, garlic, and scallions until the meat is fall-apart tender.

Most Kakuni is seasoned with a lot of soy sauce and sugar, which gives it a glossy mahogany patina. While this gives it some visual impact, this style tends to be quite sweet, and the soy sauce becomes the star of the show.

For this version, I’ve used salt as the primary seasoning, which is why I’m calling it Shio Kakuni (塩角煮 Salt Kakuni.) Although it may not be quite as visually appealing, the milder seasoning allows all the other flavors to shine through. The more balanced taste also makes it better suited as a topping for ramen than a more traditional Kakuni.

How to Choose Pork Belly for Kakuni

The first thing to look for in pork belly is having a good balance of meat and fat. I like using pork belly that has about a 60:40 ratio of meat to fat. The meat and fat should be distributed in 3 even layers, which is why pork belly is sometimes referred to as sanmainiku (三枚肉 – 3-layer-meat,) in Japanese.

As the pork cooks, much of the fat will render out, and the remaining fat and collagen keep the meat lubricated, making it fall-apart tender. If there’s too much meat, relative to the fat, the meat will get dry and stringy, and if there’s too much fat, it will be oily and cloyingly rich.

The second thing I look for is marbling within the meat layers. You’ll see this as white veins spidering through the pink meat. Pork belly is a bit like a layered cake. Even if you have a good ratio of cake to frosting, it doesn’t mean much if the cake itself is tough and dry. That’s why the ideal piece of pork belly will have layers of well-marbled meat between relatively thin layers of fat.

Finally, you want to try and get pieces of pork belly that are roughly the same thickness throughout. This is important because thicker pieces of Kakuni will take longer to tenderize, during which time the thinner parts will become overcooked. Due to the anatomy of a pig, a whole side of pork belly will inevitably be thinner on one end than the other, but when you buy it in a store, it’s usually been cut into pieces, so you can select pieces that are roughly the same thickness throughout.

One last thing I thought I should mention is that most pork belly in the US is sold skin-on. Given the long cooking time, you can leave the skin on, and it will turn into a layer of melt-in-your-mouth collagen. I personally love this, but Kakuni in Japan is usually made without the skin. In fact, it’s next to impossible to find skin-on pork belly in Japan. 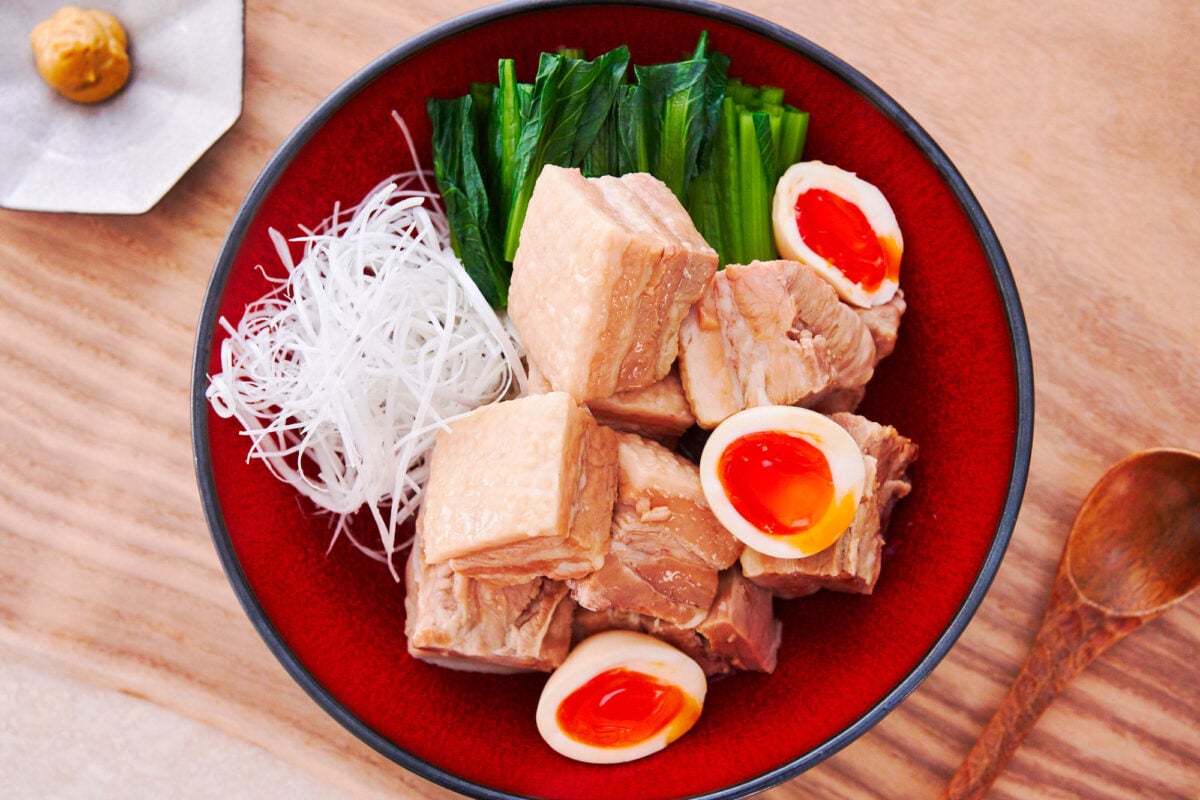 Aside from the pork belly, the other ingredients for Kakuni can be broken down into three categories.

In Japan, pork is considered to be a gamey meat. To cover up the smell, dishes like Kakuni are often cooked with aromatics. I like using a ginger heavy mix that also includes garlic and scallions.

To braise something, you need to add some liquid, and the most common liquids for making Kakuni are sake, shochu, and dashi. Because Kyushu is the birthplace of shochu, this is frequently the choice of liquid along with some dashi. Because it’s a distilled spirit, it does not contain the abundance of umami producing amino acids that sake does. Shochu is also about 25% alcohol, so you need to boil it a lot longer to get rid of the alcohol. This is why I prefer using sake.

As for the dashi, you can certainly use it in place of the water if you have it on hand, but rather than add an extra step, I opt to make the dashi directly in the pot with the Kakuni. By adding water and niboshi (dried baby anchovies) in with the pork, it creates an umami-rich stock that’s the perfect compliment to the meaty flavor of the pork.

As I mentioned before, most Kakuni is seasoned primarily with soy sauce and sugar, but for my Shio Kakuni, I cut back on both, opting for salt as my primary seasoning. This creates a milder broth that doesn’t steamroll over the flavors of the other ingredients. 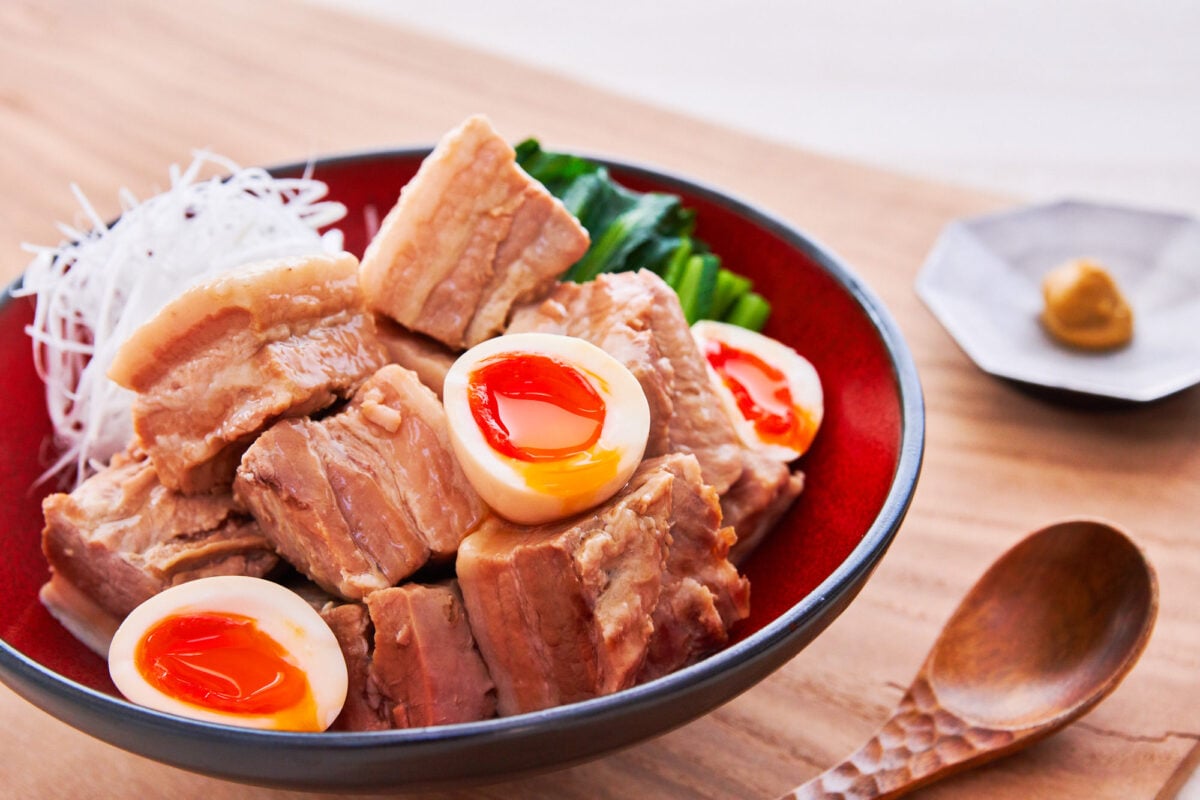 How to Make Kakuni

From a flavor perspective, there’s no question that browning the pork belly first will produce better flavor thanks to the Maillard Reaction. The thing is, Kakuni is as much about the melt-in-your-mouth texture and cubed shape, as it is about the taste. On this account, I’ve found a better way to cook this dish.

Most methods of making Kakuni have you cut the pork belly up into chunks and then either have you brown each side in a pan, or they have you deep fry the meat. This renders out excess fat and creates a layer of browned fond on the outside of the pork that gives the braising liquid a ton of flavor. The trouble with this method is that the high cooking temperature causes the outermost meat layers to seize up, forcing out their moisture and making them a bit stringy. Also, because fat and meat shrink at different rates, cutting the pork belly before cooking it through will cause the pieces to lose their cubed shape as they simmer.

This is where I decided to try and use a par-boiling technique used in the Chinese dish Twice Cooked Pork. The method involves simmering the pork belly in water until it’s cooked through, then the meat is sliced and cooked again. Using this technique has several advantages.

The most obvious is that the pork belly is preshrunk, so when you cut it into cubes and braise it, the shape stays intact. Because the meat isn’t directly exposed to high temperatures, the resulting Kakuni is also more tender. Finally, because the pork was precooked, there’s no scum to skim off of the braising liquid, which saves a bit of busy work. The only disadvantage of this method is that you don’t get quite as much complexity in the braising liquid. That’s not to say this is flavorless, quite to the contrary. All the aromatics, as well as the meat and dried anchovies, contribute a ton of umami and flavor, which is why I think the advantages outweigh the disadvantages.

That being said, if you prefer browning the meat first, here’s my original Kakuni recipe which uses the browning method.

Once the pork-belly has been par-boiled, you want to rinse off any coagulated proteins on the exterior of the pork that may lend an off flavor to the finished Kakuni. This will also quickly cool the pork belly off so you can cut it into cubes.

Then the pork goes back into a clean pot with the aromatics and seasonings and gets simmered until the meat is tender enough to cut with a fork. The amount of time will vary depending on the meat that you used, but another one and a half hours should be enough.

Once it’s tender, you can eat pork belly right away, but like most stews, Kakuni is best after the meat has had a chance to soak in the braising liquid overnight. This also allows you to remove most of the rendered oil as it will float to the top and solidify in the refrigerator. Once you’ve removed the excess oil, this is a good time to drop in a few soft-boiled eggs along with the pork. This makes for a delicious ajitsuke tamago, or ramen egg that you can serve with the pork.

Microwave ovens tend to reheat large chunks of meat unevenly, to the point that parts of the meat can end up tough, while other parts are still cold. That’s why I like to slowly reheat Kakuni in a pot along with the original braising liquid over low heat.

As delicious as Kakuni is, it can be a bit rich on its own, this is why I like to serve it with some shiraganegi (白髪ねぎ), which literally means “white hair scallions.” It’s not the most appetizing name, but a nest of these thin strands of scallions adds a wonderful texture and flavor contrast to Kakuni. It’s usually made with Japanese Negi, which is a type of Welsh onion; however, you can still make it using the white part of regular scallions. I’ve included my method for making shiraganegi in my Kakuni video below so check that out for more details.

Another condiment often served with Kakuni is Japanese hot mustard. It adds a spicy bite that cuts through the richness of the pork. 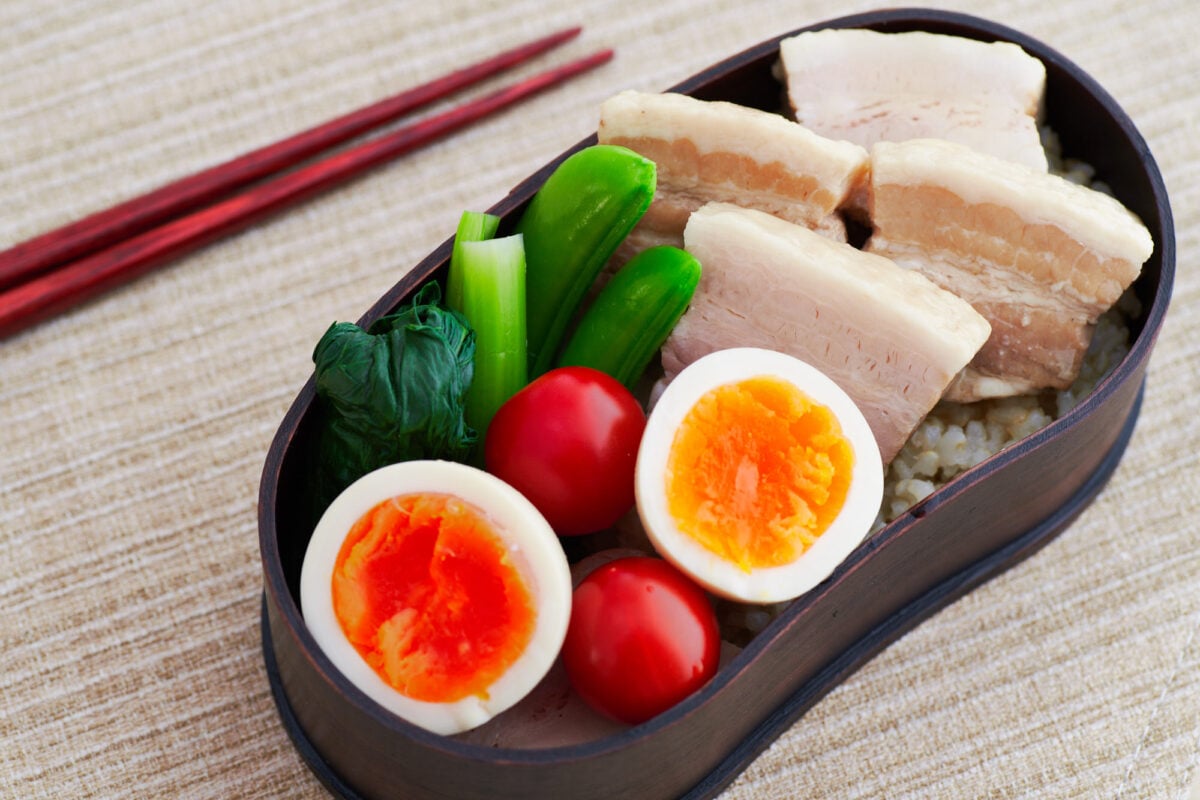 While the most common way to eat Kakuni is on its own, there are a bunch of other mouthwatering uses for this versatile dish, so don’t be shy about making a big pot of it. 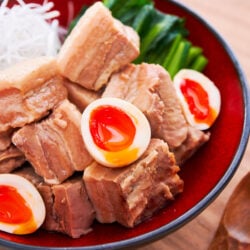