Mapo Eggplant, which is known as Mabo Nasu (麻婆茄子 or マーボー茄子) here in Japan, is a popular Chinese-style dish that was created in the image of Mapo Tofu. The eggplant is flash fried before being stir-fried and braised in a savory sauce made with dark miso, aromatics, and dashi stock, which infuse the eggplant with loads of flavor. The creamy eggplant takes the place of tofu resulting in an umami-packed dish that goes great over a bowl of rice. Although this version contains meat, you can easily make a vegan and vegetarian friendly version by preparing the eggplant according to this recipe and using my Vegan Mapo Tofu recipe for the sauce.

How to Make Mapo Eggplant

First, combine the sauce ingredients together in a small bowl, including the dashi, hatcho miso, oyster sauce, mirin, and potato starch. Hatcho miso is very firm, so I usually chop it up with the side of a spatula and then use the broad side to mash up the little chunks of miso into the dashi.

Prepare a high-sided pot with about an inch of oil and preheat it to 360°F (180°C). You’ll also want to set a wire rack over a tray to drain the eggplant after it’s fried.

I like to cut my eggplant into an oblique shape, which is called rangiri in Japanese. This allows you to cut oblong vegetables into pieces that are roughly the same size and thickness. To do this, trim off the tops and then use a knife at a 45° angle to the eggplant to cut off a triangular chunk. Next, rotate the eggplant a quarter turn, then cut off another piece with the knife held at the same angle.

Next, you want to flash fry the eggplant in batches by lowering them into the oil. Use chopsticks or tongs to quickly flip any pieces over so the skin side faces down. The high temperature of the oil sets the pigments in the eggplant skin, so they stay vibrant purple. After a minute, transfer the eggplant to the wire rack to drain. Repeat with the rest of the eggplant.

To assemble the Mapo Eggplant, heat a tablespoon of oil in a frying pan or wok over medium-high heat and then stir-fry the grated garlic and ginger for about thirty seconds or until they’re very fragrant. Next, add the minced scallion stems and stir-fry the aromatics until they’re translucent; this should take about a minute.

Dump the ground pork into the mixture and crumble it up using the side of a spatula. You want to get some good Maillard browning on the meat, so continue to stir-fry this for another three minutes. The pork will release a lot of fat, so tip the pan up and use a paper towel to absorb all the oil that pools to one side.

Add the eggplant to the pan and toss it with the ground meat. Give the sauce ingredients another stir to redistribute any settled starch, and then pour it into the Mapo Eggplant. Bring the mixture to a boil.

Simmer the eggplant together with the sauce for about three minutes. The goal is to get the sauce to thicken while allowing the flavors to meld with the eggplant.

To finish the Mapo Eggplant, add rayu to taste and stir it in. You can also leave the rayu out and serve it as a condiment at the table so that people can adjust the heat level to taste.

What is Mapo Eggplant?

Mapo Eggplant is a mashup of Sichuan spicy eggplant (鱼香茄子 – Yú xiāng qiézi) and Japanese-style Mapo Tofu (マーボー豆腐). The eggplant is usually flash-fried before being cooked in a savory and mildly spicy sauce that’s similar to the one used for Mapo Tofu. It’s a staple of Wafu-Chuka, or Japanese-style Chinese cuisine, and was popularized in the 1980s by a few brands which began to sell instant sauces that could be combined with stir-fried meat and eggplant to make the dish.

How do you pronounce Mapo Nasu?

Mapo Eggplant is a 4-syllable name pronounced as follows (read the italicized parts). 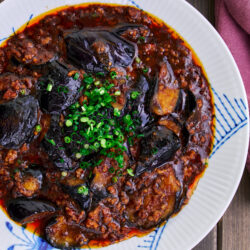