Savory, tangy, and sweet, Hayashi Rice is a Japanese stew made by stewing beef with onions and mushrooms and serving it with a side of Japanese short-grain rice. It’s a classic Japanese yoshoku comfort food that’s become a favorite among kids and grownups alike.

I make my Hayashi rice recipe from scratch, building layers of flavors by browning the meat, mushrooms, and vegetables and balancing their savory umami with the tartness of red wine and tomatoes, along with a hint of sweetness from some honey.

How to Make Hayashi Rice

The first thing you want to do is season the beef with salt and pepper.

Then you can start heating a big heavy pot such as a Dutch oven over medium-low heat. Add the butter, mushrooms, and salt to the pot and cover it with a lid. Let the mushrooms steam for ten minutes. When the timer goes off, remove the lid and turn up the heat to boil off the liquid.

Once the excess liquid is gone, you can saute the mushrooms until they’re nice and browned. This should take another ten to fifteen minutes. When the mushrooms have browned, transfer them to a bowl and set them aside.

To brown the beef, add the olive oil to the pot and place the meat in a single layer. Be careful not to overcrowd the pot, or they will not brown properly. Let these fry undisturbed for about three minutes until you have a nice brown crust on one side. Then, flip them over and brown the opposite side. Once both sides have browned, remove the beef from the pot.

There should be enough oil in the pot at this point, but if there isn’t, you can add a bit more olive oil. Next, add the onions, garlic, and water to the pot and cover it with a lid. Reduce the heat to low and let the aromatics steam for ten minutes. When the timer goes off, remove the lid and increase the heat to boil off the excess liquid. Saute the onions for another ten minutes or so, or until they start to brown around the edges.

Deglaze the pot with the red wine and beef stock, and then add the tomato paste, ketchup, chunou sauce, honey, and porcini powder. Return the browned beef to the pot and bring it to a boil. You will probably start to see some greyish foam start to float to the surface. These coagulated proteins from the meat can make the Hayashi Rice taste muddy, so I recommend skimming it off until you don’t see anymore.

Reduce the heat as low as it will go, cover the pot, and let the stew simmer for about two hours, or until the meat falls apart when prodded. Make sure you check on it every half hour or so and give it a stir to keep anything that’s settled to the bottom from burning to the pot. You want to the amount of liquid to reduce as the stew cooks, but if it starts looking too low, you can add a bit of water.

Once the beef can be easily flaked, add the sauteed mushrooms back into the pot. While you wait for the flavors to mingle, prepare the roux by adding the butter and flour to a small frying pan. Fry the mixture until it is golden brown.

Turn off the heat, add a few ladles of braising liquid from the pot into the roux, and quickly mix this together until it’s smooth and free of lumps. Add the roux mixture to the pot and stir it until the Hayashi Rice is nice and thick.

Other Ways to Eat Hayashi Rice

The sauce for Hayashi Rice is loaded with so much flavor it naturally makes a delicious sauce for other dishes. This has led to several mashups such as Omuhayashi (オムハヤシ), which is Omurice topped with Hayashi Rice roux, and Hayashiburg (ハヤシバーグ) which is Hamburg Steak draped in this stew.

One of my favorite ways to use up leftover Hayashi Rice stew is to shred the beef into the sauce to make a meaty ragout. Then I boil some pasta and toss it with the Hayashi Rice sauce and some grated cheese to make an easy delicious pasta.

What is Hayashi Rice?

Hayashi Rice is a Japanese stew made with beef, onions, and mushrooms cooked in a rich brown sauce flavored with tomatoes. Together with a side of rice, it’s become a staple of Japanese home cooking that’s enjoyed by people of all ages. These days, most people make it using instant roux blocks, but I make my homemade Hayashi Rice from scratch.

Under the Tokugawa Shogunate, Japan maintained a strictly isolationist foreign policy from 1633 until 1853, when it reopened its borders to the world. When Japan ushered in the Meiji Era in 1868, Japan’s port cities were bustling with trade. The influx of foreigners brought with them the introduction of Western-style foods, including the practice of eating beef. These Western-influenced foods, collectively called yōshoku (洋食), form an entire sub-genre of Japanese cuisine, including favorites such as Tonkatsu, Napolitan, and Chaliapin Steak.

Although several people have claimed to be the inventor of Hayashi Rice, it is not clear who created it first.

What does “Hayashi” Mean?

Since it’s unclear who created Hayashi Rice, the name’s origins are equally ambiguous. There are a few theories as to the origins of the name. The most common explanation is that it’s a mistransliteration of “hashed beef,” a historical dish introduced by the British to Japan. As a result, some people still call this dish Ha’shyudo Beef (ハッシュドビーフ). Other theories posit that it was named after someone named Hayashi. In some versions of this theory, Hayashi is the chef or book publisher who created the dish; in others, he’s the customer who requested the dish.

How do you pronounce Hayashi Rice?

Hayashi Rice is a 6-syllable name pronounced as follows (read the italicized parts).

ha like honk
ya like yacht
shi like sheet
ra  the “ra” sound does not exist in the English language, and the best way to make it is to say the word “romp” with the tip of your tongue at the front of your mouth.
i like even
su like soup

What is the difference between Hayashi rice and Curry rice?

Because of the similar name and appearance, the difference between Hayashi Rice and Japanese-style can be confusing if you’ve never tried them before. Both dishes are stews created in Japan, inspired by dishes from other cultures. Both dishes include a roux to thicken them and are served with rice. But that’s where the similarities end. Flavorwise, curry is spicy and fragrant with a savory and sweet taste. Hayashi rice does not include many spices or herbs, but it gets its complexity from layers of browned ingredients such as mushrooms, beef, and onions, along with fruity tomatoes and red wine. Hayashi Rice also has a tangy taste that is not common in curry.

Can Hayashi Rice be frozen?

Because Hayashi Rice doesn’t contain large pieces of root vegetables such as potatoes or carrots, it lends itself well to freezing. Once it cools, you can put it in a freezer-safe container with a lid or into plastic freezer bags and freeze it for up to 2 months. To heat it up, you can put it into a pot still frozen, along with some water, and then cover the pot up with a lid before reheating over low heat. 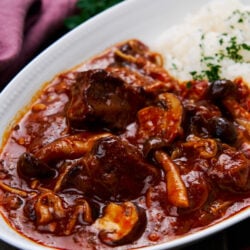