It’s not the same as the sesame wafu dressing often served at Japanese restaurants in the US, but it can easily be converted by adding a bit of vinegar and mayonnaise (I’ve included the recipe in the FAQs below).

How to Make Japanese Sesame Sauce

The first thing you want to do is grind the sesame seeds and katsuobushi into a powder. You can do this in a blender or food processor, but a mortar and pestle will work as well.

Once you’ve ground up the sesame and katsuobushi, add the rest of the ingredients and blend until it’s smooth and creamy. If you did the grinding in a mortar and pestle, you can transfer the mixture to a bowl and whisk in the other ingredients.

The sesame sauce should last at least two weeks kept in a clean sealed container or bottle in the fridge. It may last even longer, but I’ve never had it around that long.

Ways to Use Sesame Sauce

The plates and bowls pictured in this post were sent over by Musubi Kiln. They have a fantastic selection of both classic and modern Japanese ceramics and tableware. Get 5% off your order by using coupon code “NORECIPES” at checkout.

What is Japanese Sesame Sauce?

Japanese sesame sauce, which is known as Goma Dare(ごまだれ) in Japanese, is a condiment that’s most often used as a dipping sauce for Shabu Shabu. A good one is made thick and creamy, thanks to the addition of tons of sesame seeds. In addition to its use as a Shabu Shabu sauce, Goma Dare can be used to dress steamed vegetables such as broccoli, cauliflower, and green beans. It can also be used as a dipping sauce for sashimi or cold noodles such as udon or soba.

How do you pronounce Goma Dare?

Goma Dare is a four-syllable name that is pronounced as follows:

go like ghost
ma like mall
da like dot
re the “re” sound does not exist in the English language, and the best way to make it is to say the word “rain” with the tip of your tongue at the front of your mouth.

Most versions of this sauce contain dashi, which includes katsuobushi (smoked, dried and fermented skipjack tuna). If you want to make this Goma Dare plant-based you can omit the katsuobushi, and then use a plant-based dashi (such as konbu dashi or shiitake dashi) in place of the water.

How do you make sesame dressing? 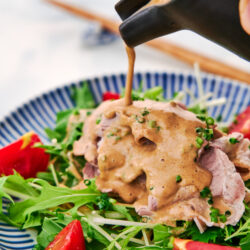