I love fried chicken of all kinds, but of all the fried chicken in the world, Karaage is my absolute favorite. Its exquisite balance of taste, texture, and aroma is unbeatable, and like pizza, it’s even good served cold in a bento box lunch.

Karaage, is a deep-fried dish where a protein or vegetable is coated in potato starch and deep-fried until crisp. Chicken is the most common protein, but it’s also made with seafood, such as blowfish. These days, Karaage is almost always seasoned, but this wasn’t always the case.

Historically, the term Karaage referred to any ingredient coated with flour or starch and then deep-fried without being seasoned.

To the east of Osaka, there is a river called Tastutagawa, which is famous for the beautiful autumn foliage surrounding it. When chicken is marinated in soy sauce before being coated in starch and fried, it turns the color of autumn leaves, which is how Tastutaage is said to have gotten its name. By this definition, what most of us know as Karaage is technically Tastutaage.

That being said, in modern parlance, the two names are used interchangeably, and while there may be some regional preferences, “Karaage” is the more commonly used of the two.

Although Karaage can be made with almost any kind of meat or fish, it’s most commonly made with chicken. Specifically, you want to use skin-on boneless chicken thighs. There are two reasons why thigh meat will always taste better than breast meat. The first is that the type of muscle tissue in the legs of chickens is fundamentally different from that of breast meat. They are built for endurance and contain a higher concentration of myoglobin, which gives leg meat its characteristic dark color and umami-rich taste.

The second is that leg meat is fueled by fat (vs. glycogen for breast meat), which why thigh meat typically has higher fat content than breast meat. We’ve all heard the saying that “fat=flavor,” but it’s not just flavor that the fat imparts. As meat cooks, the muscle fibers contract and expel water, but since fat takes longer to render out, the leg meat ends up juicier and harder to dry out.

I also like to use skin-on thighs for Karaage because the skin helps insulate the meat (at least on one side) from the high temperature of the oil. When it’s done frying, most of the oil should be rendered out of the skin, making it nice and crisp, while the underlying meat is tender and juicy.

The last thing to consider with chicken for Karaage is to use the best quality chicken you can find. This means using fresh chicken that has not been previously frozen, and ideally a heritage breed that’s been raised cage-free. Ice crystals that form during freezing rupture cell walls, which make meat spongy, also allow the liquids to drain out faster as the meat cooks. Most supermarket chickens are “broilers” that have been bred for several commercially favorable reasons (like reaching maturity more quickly), none of which include things like better texture or flavor. This is why traditional heritage breeds tend to taste better (but also cost more). Free-range birds also tend to taste better because they get more exercise. They also eat a more varied diet, as they’re snacking on natural foods in their environment other than commercial chicken feed.

There are so many ways in which Karaage can be seasoned, but to this day, the best Karaage I’ve ever had was simply seasoned with soy sauce, sake, and ginger. This is why my marinade is so basic. The soy sauce brings the salt and umami, while the sake imparts a mild sweetness and a synergistic boost of umami. The ginger smooths over any gaminess in the thigh meat, while enzymes like Zingibain help tenderize the chicken.

Some people like to add garlic to their marinade, but I find this overpowers the chicken’s flavor, which is why I don’t add it to mine. I also don’t recommend adding anything overly sweet, such as fruit juices, mirin, or sugar to the marinade as it will burn and make your chicken dark and bitter.

For variations, you can marinate the chicken for Karaage using a salt brine, curry powder, or chili powder, and I’ve even swapped out the soy sauce for fish sauce from time to time.

Karaage can be coated with almost any flour or starch, but my personal favorite is potato starch. It results in a light, crisp shell that’s similar to potato chips in texture. Cornstarch and wheat flour both result in a denser crust with the former producing a texture similar to tortilla chips, and the later producing a shell that’s more like buttermilk fried chicken. In the US, potato starch is produced by Bob’s Red Mill and should be available in most upscale supermarkets.

As a side note, I prefer using potato starch (over cornstarch) in almost every application, whether I’m thickening a sauce, coating a food, or adding it in to bind ingredients together. If you don’t have it in your pantry, I highly recommend ditching the cornstarch and picking up some potato starch instead.

Double frying is a process in which you fry a food once, remove it from the oil, and then fry it again. This creates a crust with a crunch/crispness that tends to last a bit longer, and I recommend double frying most types of fried chicken, including my Korean Fried Chicken, and Tebasaki. The problem is that the longer overall cooking time tends to overcook the meat. This is fine for wings, where it’s really about enjoying the crisp skin, but for Karaage, it’s about the juicy, flavorful leg meat, which is why I don’t double fry this.

How to make Karaage

Next, the chicken gets dredged in potato starch, this is also a matter of preference, and you can go for a very light coating for a thin crisp shell or a thicker coating for a more robust texture.

The final step is to fry the Karaage, and this is a step that requires a bit of finesse. For me, the perfect Karaage is potato chip crisp on the outside, and juicy enough on the inside to flood your mouth with a savory “soup” of chicken juices. Since chicken needs to be cooked to 165 degrees F to be safe to eat, I like to cook it to an internal temperature of 160 degrees F and let carryover cooking bring the temperature up to 165 F as it rests. A few degrees off and the chicken will either be unsafe to eat, or it’s going to be less juicy than it could be. To further add to the challenge, deboned leg meat varies in thickness, so although you want to do your best to cut the pieces roughly the same size, the reality is that some pieces are going to cook faster than others.

Experienced fryers in Japan can consistently judge the chicken’s internal temperature by the size of the bubbles forming in the oil around the meat, but this is a skill that takes time and practice to learn. In the meantime, I recommend keeping an instant-read thermometer handy and checking each piece of chicken until you start to feel more comfortable about judging when the chicken is cooked. In my kitchen, I use a Thermoworks Thermapen, which are fast, accurate, and easy to use.

How do you pronounce Karaage?

What does Karaage mean?

There’s some debate about the origin of the name, but characters 唐揚げ literally mean “Chinese Fried”.

What can I substitute for sake?

Sake is added to the marinade for 4 reasons. The first is that sake contains a ton of amino acids, which creates the taste of umami. The second is that sake, which is made with rice, imparts the rice’s unique flavor to the chicken. The third is that it contains some residual sugars which lend a mild sweetness to the marinade without making it sweet. Finally, the liquid will dilute the soy sauce, preventing it from getting too salty.

Unfortunately, there is no great substitute for sake that hits all four of these factors and without introducing unwanted tastes to the dish. For example, the chicken stock will add amino acids and help dilute the marinade, but it won’t add rice flavor or sweetness. Fruit juices are too sweet, and the acidity will make the chicken sour. Wine can have the amino acids, and residual sugars, but like fruit juice, it’s acidic, which is not desirable.

Although it’s not going to taste the same as using sake; chicken stock or dashi with a small pinch of sugar is the best substitute.

Will adding sake to the marinade make this alcoholic?

There is such a small amount of sake in the marinade; the heat from frying will vaporize most, if not all of the alcohol. If you are concerned about the small amount of alcohol added by the sake, you should also be worried about soy sauce, which contains 2-3% alcohol by volume as a natural byproduct of fermentation (same goes for miso).

Is there a sauce for Karaage?

Since the chicken for Karaage is marinated, it’s typically eaten without a sauce. That being said, you can turn Karaage into many other dishes by coating it with a sauce. Some examples are Orange Chicken and Japanese Sweet & Sour Chicken.

Can I add Karaage to a bento?

Karaage is one of the most popular bento items in Japan. Aside from being a hit with kids and adults alike, it packs and transports well because it’s well seasoned and has a low moisture content. 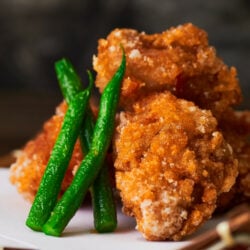 What do you think?353 Cancel reply